Deliciously Sinful Liaisons, A Steamy Romance Boxset by The Lord of Lust
7 Books, 7 hard and rugged men, 7 sizzling page turners that will have you devouring every word from start to finish... 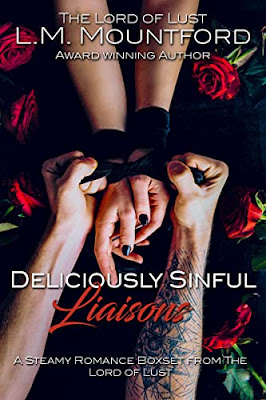 - Broken
A hard and gritty dark romance. The opening in the Broken Heart Series will suck you down the rabbit hole of South London's seedy criminal underbelly.
- Just Once
The opening to the Just Friends series is a short and sweet friends find love Romance.
- Reckless
A Forbidden, Mafia Protector, Dark Romance.
- Beneath the Sheets
A Friends to Lovers Second Chance Holiday Romance in the Tropical Cocktails Romance Series with no cheating and no cliffhangers, just a lot of heat and a happily ever after. (Beneath the Sheets was previously released under the title: Together in Sydney. Now revised and improved.)
- Training Tracey
A wicked and uber-hot coming-of-age love triangle!
- Blood Lust
A sizzling-hot Paranormal romance. If you like strong-willed, sassy heroines and oh-so-bad, drop-dead gorgeous Vampire heroes with lots of bite, you’ll love this page-turner.
- Sweet Temptations: The Babysitter
Sweet Temptations: The Babysitter is the original debut from the Lord of Lust, L.M. Mountford, a sizzling tale of lust and temptation that will ignite your eReader and leave you panting for more as it follows a modern man's journey across the Rubicon. 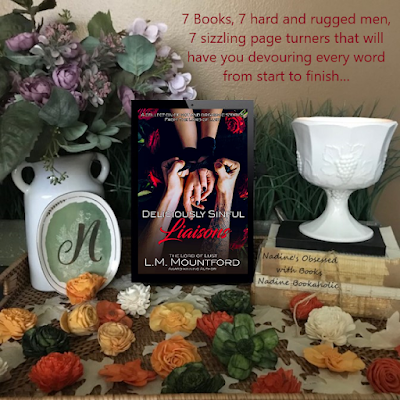 This is a great box set that has a little for everyone in it from Contemporary to Paranormal with some tropes as Friends to Lovers, age gap, second chance, virgin romance, menage, and more. You can read them as you please or just binge read them all like I did. Either way you do it be prepared with a tall glass of ice water to cool you off. I read this anthology back in 2019 when it was first released, this is a reread for me as one of the stories has been more developed and the title has changed.
- Broken ⭐⭐⭐⭐⭐
If you're looking for a hot quick read this is the book for you but be warned once you meet Vickey and Jake you'll want more of them. This is a novella, their story continues in Shatter.
- Just Once ⭐⭐⭐⭐
Well I’ll be, that has to be the quickest book I think I have ever read....less than 20 minutes and it was hot. The internal banter was great and really helped build not only the story line but the suspense of Will they or won’t they. I enjoyed Faye and Terry so I will definitely be reading their next book Just Friends
- Valentine Misadventures ⭐⭐⭐⭐
Luke & Sophie’s secret affair has been uncovered and they have to get away or Luke will be killed...and quite possibly Sophie as well, that’s what happens when you go against the crime boss AKA Sophie’s dad. This book had me on the edge of my seat wondering what was going to happen, it was fast paced and steamy as heck. Will it turn out to be a Happy Valentine’s Day? Only one way to find out....
- Beneath the Sheets (formally Together in Sydney) ⭐⭐⭐⭐
As with other books by L.M. Mountford this was a hot, quick read. Alex and Sarah had been friends for years, they were each other’s first love but haven’t seen each other for several years, now Alex is heading to Sydney to see Sarah. I enjoyed the chemistry between Alex and Sarah they made for a very steamy read. This story had more character development than the original story Together In Sydney and was a longer so you were able to connect more with the story and characters.
- Training Tracey ⭐⭐⭐⭐💫
Tracey is Amanda and Mark Burton’s daughters best friend, when Amanda comes home to find Tracey crying and finds out why she enlists Mark’s help to make sure Tracey’s first time is everything she could ever want.
Very Spicy quick read. If you enjoy The Baumgartners by Selena Kitt you’re going to enjoy this read as well.
- Blood Lust ⭐⭐⭐
Kate is lost after her parents died and her brother was murder so when she meets Lucien in a club she gets a little spooked and leaves only to find herself in some trouble. Lucien on the other hand is very taken with Kate which is a good thing because she can really use his help when they meet again.
This was another hot quick read but I’ll be honest, I didn’t enjoy it as much as some of the others that I’ve read by L.M. Mountford
- Sweet Temptations ⭐⭐💫
Richard and Alice have attended a company holiday party the company he works for was holding, Richard wasn't happy about being there and couldn't wait to leave. When they return home their eighteen year old babysitter says she needs his help so he goes upstairs to his apartment and proceeds to have sex with her. It was hot but it still felt kind of icky and it wasn't because she was calling him Mr. Martin because there are plenty of books where that's a thing, and it wasn't the age gap because again that's not an issue. It could be because his wife was in the apartment/flat downstairs and he was upstairs getting his rocks off without her knowledge, it was full on cheating - not an open marriage or a menage or anything like that, and then while he's having sex he starts to feel guilty...but that doesn't mean he stops mind you.
If you don't mind cheating you'll probably enjoy this read but if you do, I'd suggest you skip this one.
I would recommend this box set to those that enjoy Steamy Contemporary Romances.
Happy Reading!!! 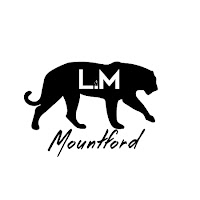 A self-confessed tiger fanatic, L.M. Mountford was born and raised in England, first in the town of Bridgwater, Somerset, before later moving to the city of Gloucester where he currently resides. A fully qualified and experienced scuba diver, he has traveled across Europe and Africa diving wrecks and seeing the wonders of the world.
Website * Facebook * FBGroup * Twitter * Instagram * Bookbub * Amazon * Goodreads
at August 30, 2022