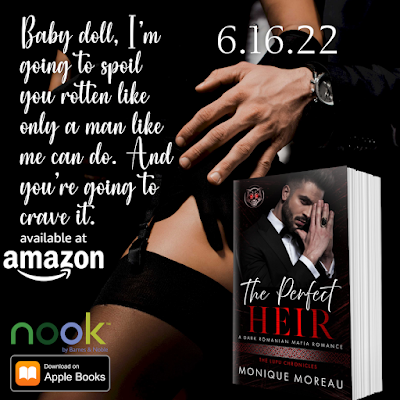 It's Release Day for The Perfect Heir by Monique Moreau! 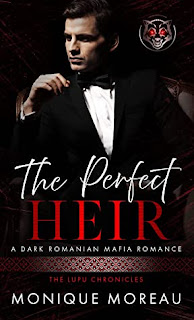 I am Clara Hagi, the Virgin Queen. I may not be allowed to marry, but I will be the first woman to rule a mafia clan. The Lupu clan is encroaching on Los Angeles, but they won’t get far. Not on my watch.

I ache for Tatum, their consilier. I love his piercing black eyes, his tall, muscle-bound frame, his touch, his commands, his beguiling strain of vulnerability—I love it all.

The one time and only time he kissed me—my first kiss—was a mistake.

That’s what he called it.

He’ll regret those words; I’ll make sure of it.

Nothing good came from kissing that girl, Clara. A girl whose clan hates mine. A girl who’s off-limits. A girl I should loathe.

As consilier, I live and breathe the Lupu clan, and I do it perfectly. Perfection is the only way to make up for my father’s betrayal, a secret I will take to the grave.

I’m charged with getting the Virgin Queen under control. Once I do, my clan will rule LA, just as it rules NYC. Every time I see her, I remember. Every time, we spar, I want to kiss her. Every time we accidentally touch—and I hate to touch—I ache for her.

One kiss was not enough. Maybe bedding her will get her out of my system, virginity bedamned. Make her pay for twisting me inside out. Make her hurt a little. Purge her from my body and mind.

She deserves better than a tainted man like me, but what if I fall for the Virgin Queen? 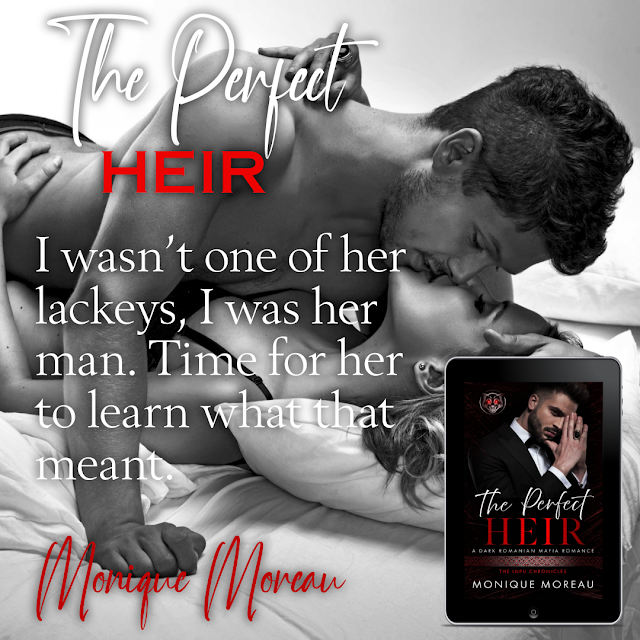 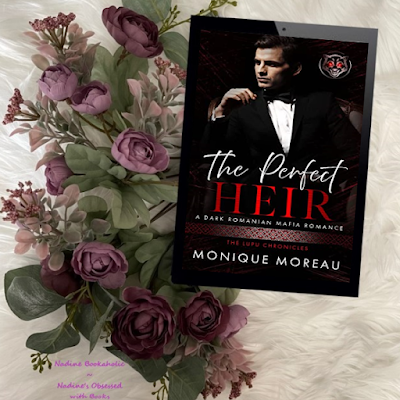 New to me author Monique Moreau hits it out of the park with this dark Mafia Romance! I couldn’t put it down, finished it in one day, a definite five star read.
I met Author Monique Moreau during a TikTok Live event she was having with Author Rebecca Hefner, an author I follow, I hadn't read any of her books before but when she was talking about this DARK MAFIA ROMANCE series which is based in my home state of New York and more directly in Sunnyside which is an area that I have some family, I am like this is definitely being added to my TBR list! I don't know about you but I love reading books that take place in areas that I know, it's always fun to see if the author really knows the area they are talking about or just did a little research on it sometimes you can tell the difference and other times you can't but for me it just adds another dimension to the book I am reading. Side note: I did find out that Monique Moreau is from New York and does know the area she was writing about.
THE PERFECT HEIR is the fourth book in the LUPU CHRONICLES but is the first book I have read in the series, I can honestly say that it can be read as a standalone if you choose to read it this way even though both characters have been in prior books (not sure about how much Clara was around in past books she may have only been in the one before this, no idea) you get enough of their backstory in this book to know how they feel about one another.
Clara Hagi is what everyone calls The Virgin Queen, and that is because her father has stipulated that she can never marry, never have a family, and must remain a virgin in order to take over the Hagi Clan. I will admit to having a bit of an issue with this because he was letting his past dictate his daughters future but I figured this stipulation would be where all of the angst played out...but it wasn't there was more!
Tatum hasn't always been the guy girls flirt with, but now that he is consilier for the Lupu family they're always around. His past, the secrets he carries, as well as his panache for kink keeps him away from the Mafie girls but there is one girl that gets under his skin, Clara, and when she is sent to New York to learn how things are run from his organization he knows he has to stay clear of the virgin because he doesn't think she'd be able to handle him. Oh how wrong he is.
This story has a lot going on, not only with the chemistry brewing between Tatum and Clara but also within the Lupu family itself, especially when secrets are revealed.
I really enjoyed this story and I would recommend it to anyone that enjoys Steamy Mafia Romances, BDSM Romances, or Darker Reads.
Happy Reading!!!
﻿**I have voluntarily reviewed an Advanced Readers Copy of this book for my Blog, Nadine's Obsessed with Books** 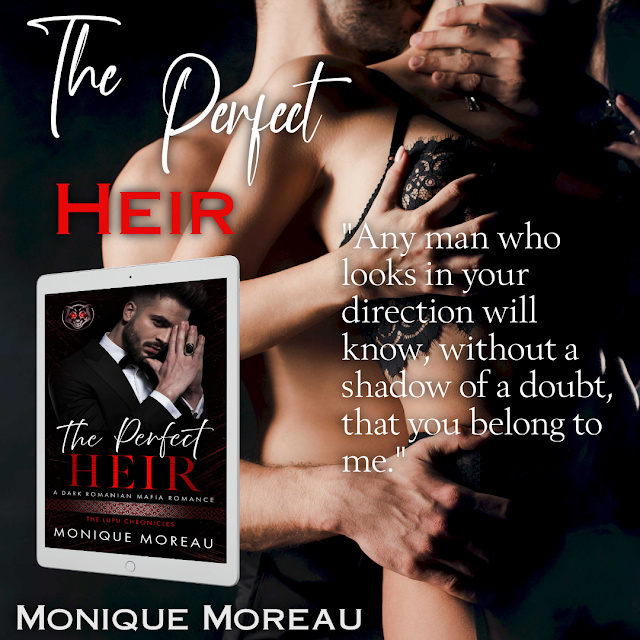 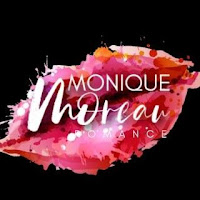 Growing up in New York City, I used to walk the hot pavements in the melting heat of the long summers, and dream. Uptown to downtown, eastside to the westside, and underground to catch a subway racing out into the boroughs.

During my wanderings, my magic pencil spun out fantasies full of romance, with first meetings, heartbreaks, and reunions. Sometimes my boy crush (unrequited, of course) starred as the hero.

I grew up, and after a stint in art school, became a lawyer ‘cuz a woman’s got to make a living. I came from parents who fled to France as refugees, and as an attorney, I dedicated my work to helping survivors of trauma and persecution.

I believe in them. In their grit, in their determination to hold on, to pull through and, somehow, someway, to keep themselves intact, body and soul.

Perhaps that is why I am drawn to writing stories of men and women who live through heart-rending pain, desperate yearnings and, ultimately, reach a place of redemption.

For a long time, I fought the urge to veer off the expected, safe path until I couldn’t go on unless I took a chance and made a change. I began to write, stopped, and began again. Finally, I gave in and here I am.

Come join me on my journey…