The Falling Trilogy by Maya Hughes ~ Book Review with Excerpt 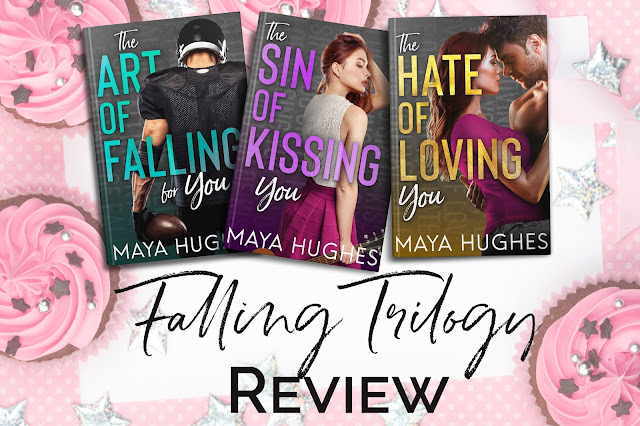 The Falling Trilogy is a Fulton U Universe sports romance spinoff.

I don’t deserve her forgiveness, but I can’t stop myself from fighting for it.

Bay Logan ran from me four years ago and I can’t blame her. I broke her heart and my own with one split second mistake.

If I were a better guy, I’d walk away and let her live her life, but maybe I haven’t learned my lesson yet because I can’t stop thinking about her. And I won’t stop until she knows how much I still love her.

I loved Keyton in the Fulton U series, there was always an air of mystery surrounding him and I couldn't wait to get his story. We discovered in the first book of the trilogy that there was so much going on in his life that it definitely took more than one book to give his story justice. Which leads us to the Falling Trilogy.

In this trlogy we have Bay and Keyton coming facetoface after not seeing one another for several years then we are brought back to their High School years and learn all about Keyton's abusive father and his relationship with Bay in the first book, it ends with a cliffhanger so be prepared to jump into the second book. Next we see how they reconnect and how things are going in their lives after college and we get to watch how they start to rekindle their relationship. Once again we are left with a cliffhanger and I will admit to wondering how Maya was going to give Keyton and Bay their HEA in the third and final book but thankfully it works out.

If you read the Fulton U Series you will love seeing some of the old gang make appearances and it was so much fun getting an update on their lives. THE HATE OF LOVING YOU was a great way to end not only the trilogy but also the Fulton U Universe. I would highly recommend this trilogy to anyone that enjoys New Adult Romances, Contemporary Romances, Steamy Romances, or Second Chance at Love Romances. 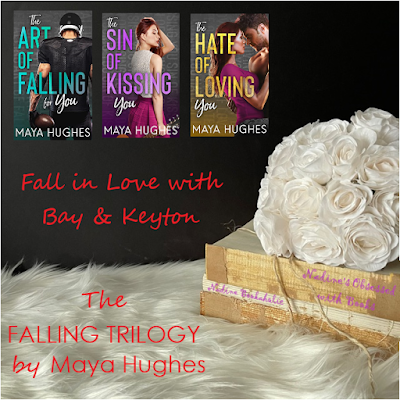 Kissing her was a mistake. It was supposed to be the period at the end of the sentence, closing the book on this attraction between us. I’d thought maybe she’d slap me or shove me away.
Instead, she’d met my lips with her own uncontainable desire. I’d pressed my hand against the small of her back and held her face to mine. Staring into her eyes, I knew it wasn’t the end of anything.
I’d dropped a lit match into a warehouse of fireworks, and all I had was a garden hose to fight this fire.