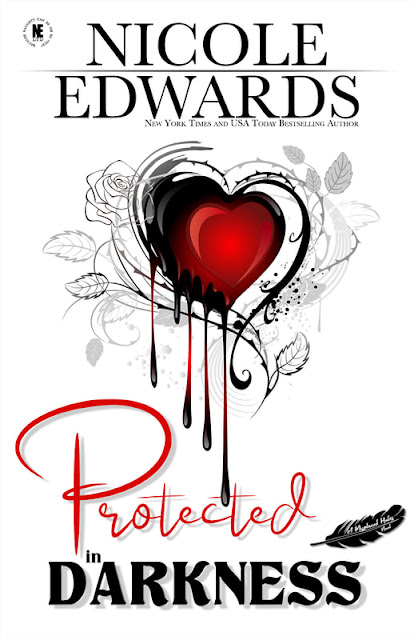 Heaven refers to them as Misplaced Halos.
Humans don’t even know they exist.
This faction of celestial warriors was sent here under the cover of darkness to protect humanity from Lucifer’s demons.
In return for their servitude, these warriors expect only one thing: the eternal love they were promised, what angels refer to as an amsouelot.


The first of his kind, Obsidian has spent the past fifteen hundred years fighting alongside his brothers, protecting humans from Lucifer’s demons, all while keeping to the shadows. Their mission is simple. Right up until it isn’t. The day Obsidian learns of a traitor in Heaven is the day everything changes. The entire reason for his existence is put on hold because there’s a new assignment: find the female whose soul belongs to his and protect her, no matter the cost.

Penelope Calazans spends her days sleeping and her nights serving free drinks to the gamblers looking to win big in Sin City. It’s not a glamorous life, perhaps a tad lonely, but she’s content. Or she thought she was. Then he appears. The mystery man who would turn out not to be a man at all, but rather an angel. The angel who would turn Penelope's mundane life upside down, revealing what really lurks in the dark.

Not only do they have to battle the demons looking to possess their souls, but Obsidian and Penelope must overcome the obstacles that come with falling in love. In the end, an angel and a human must make the ultimate sacrifice, all in the name of a love everlasting. 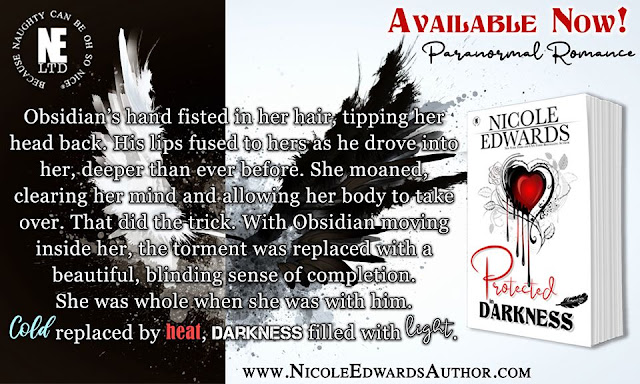 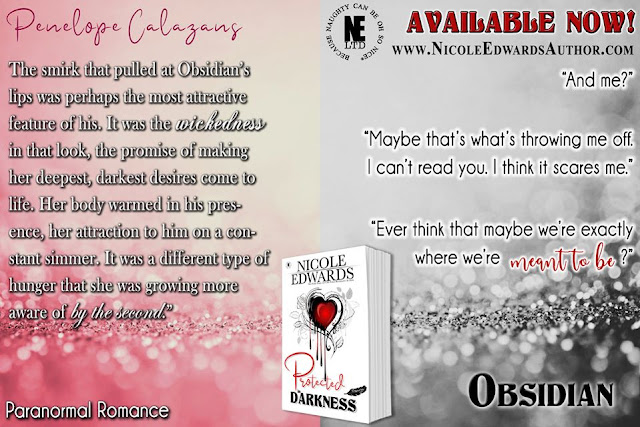 I'm always a little apprehensive about authors switching genres but Nicole Edwards did a great job with her first dip into paranormal romance.
Obsidian is an angel walking the earth protecting humans from Lucifer's evil, in this book we learn that Lucifer is after his and the other Misplaced Halos' amsouelots, their soul mates. They need to find the women of their souls in order to keep them safe and keep everything right in the world. It doesn't sound easy and it's even harder than you would think, so many obstacles!
PROTECTED IN DARKNESS was very easy to fall into and feel as if I was a part of that world. Things aren't easy for Obsidian and Penelope but when Lucifer is after you how could they be. There were so many twists and turns, Nicole takes us on one heck of a ride with this first book of what looks to be an amazing series. I cannot wait to read the rest of the books!
If you are a fan of Paranormal Romances and haven't read any of Nicole Edwards' books yet I would urge you to add this one to your TBR list, it has everything you can hope for and much more!
Happy Reading!!! 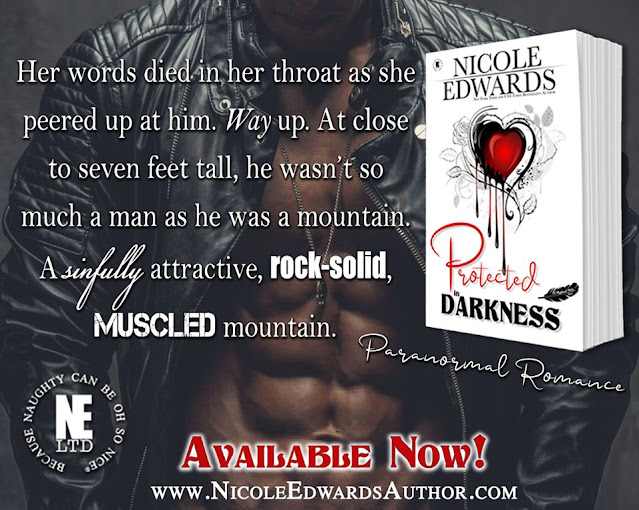 EXCERPT:
Click here to be brought to the Prologue 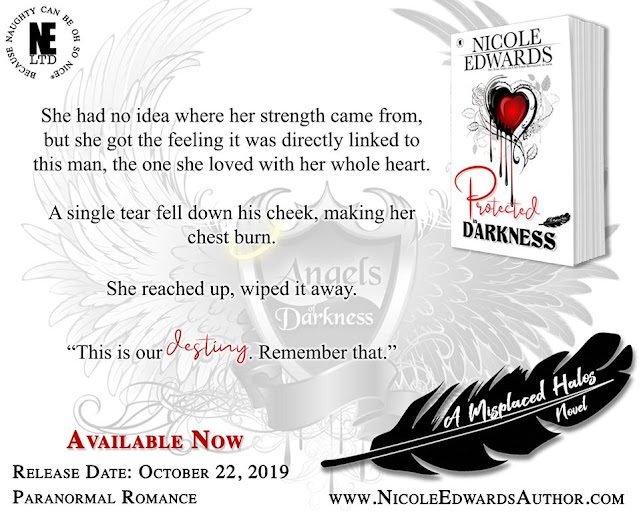 Nicole is a New York Times and USA Today bestselling author who was born and raised in Texas. Married with three kids, two dogs, one adorable granddaughter and a rambunctious grand-puppy, she has plenty of interaction to keep her imagination brewing. Her books have been featured in USA Today's Happy Ever After segment as well as Indie Reader's bestseller list. She has forged her way as both an independent and a traditionally published author.