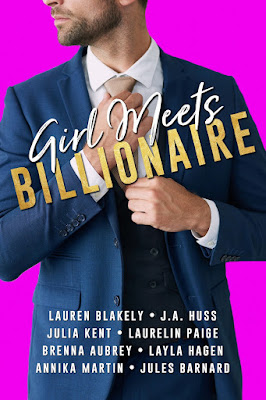 Girl Meets Billionaire… and then what happens?
The road to happily-ever-after has many twists and turns, especially when an arrogant, sexy alpha billionaire is involved.
Read 8 FREE billionaire romances that will make you laugh, cry, and swoon in this special edition box set available for a LIMITED TIME only.
Night After Night by Lauren Blakely

Julia thought she could spend one passionate week in the arms of gorgeous Clay and then leave him behind — but she was wrong.
Mr. Perfect by J.A. Huss

Seduced by her billionaire boss, Ellie discovers forbidden desires she didn’t know she had. But what if the perfect man turns out to have hidden secrets?
Shopping for a Billionaire’s Fiancée by Julia Kent

Well-heeled Declan is getting ready to propose to Shannon, but first he’s got to get through his pesky future mother-in-law — and his fiancée-to-be just swallowed the ring!
Dirty Sexy Player by Laurelin Paige

In order to get her inheritance, Elizabeth agrees to a fake marriage with playboy businessman Weston. It’s supposed to be a temporary professional agreement — until they can’t deny their chemistry any longer…
At Any Price by Brenna Aubrey

Blogger Mia Strong cashes in on her online popularity by selling her virginity to the highest bidder — with no strings attached. But when sexy CEO Adam Drake wins the prize, all bets are off…
Anything For You by Layla Hagen

Devoting his life to his younger siblings means CEO Landon Connor has no time for romance. But one look at landscape designer Maddie Jennings leaves Landon hot and bothered… Will he finally consider making room in his life for love?
Most Eligible Billionaire by Annika Martin 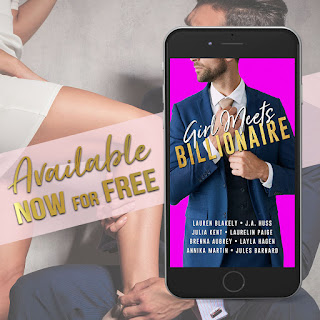 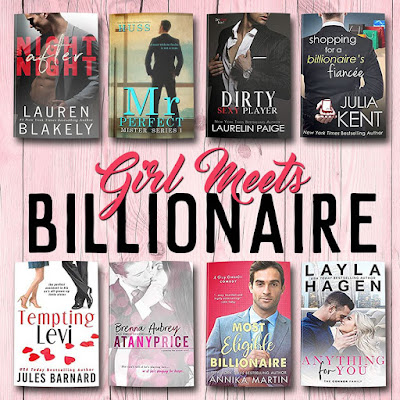 
“You know I like the sex. I think the part that’s not getting through to you is how very much I like all the other parts. I like what’s in here,” he said, stretching across her to tap her forehead with his index finger, “And I like doing the things here,” he said, sweeping his thumb across her lips, “that involve talking.” He traveled down her chest, tracing a line between her breasts, and landing on her heart. “I also like the things I’m seeing in here.”
― Lauren Blakely, Night After Night

"I looked at the windows past him, trying to distract myself. Lights flashed and swirled around the dance floor in time to the beat, the only part of the music which made it into the sanctuary of the bubble room. I could tell it was crowded, but I couldn't make out faces the way they could probably make out ours. "I don't know if anyone's looking,” I said.

"Don’t worry about them. Just focus on what you’re doing."

Easy for him to say. He wasn’t facing them. He was only looking at me.

Nope. I couldn’t think about that either. Just had to focus on the task at hand.

I closed my eyes. "So just pretend that I… That we are… That under my dress…" I couldn’t even say it.

Weston leaned forward and murmured near my ear. "Yes, pretend that under your dress you are not wearing any panties. I have my dick out. I'm working you, and you are showing me exactly how you like it. Now go."

Just like that, my panties were damp.
― Laurelin Paige, Dirty Sexy Player

“Adam,” he said quietly, his eyes lowering to focus on my mouth. My heart skipped a beat in its frenetic pace.

“I want to give you one more thing to think about.”

He leaned closer, his head approaching mine. I didn’t have the time to step back nor, I think, the willpower to do it even if it had occurred to me. His mouth met mine in a firm, sure kiss.

I’d been kissed before, but it had been years, now, and I’d never, ever been kissed like this. Our heads moved together for long minutes and I felt like I hadn’t breathed in a lifetime.

Everything was spinning around me and I—I was spinning too, delirious with want. Like a woman drowning in the middle of stormy sea, in desperate need of a life raft. That sea was Adam Drake and he was pulling me adrift, stranding me in some strange and forgotten land.

When finally he ended it, he pulled away so slowly that I could hardly tell our lips had parted until cool air passed between us. It was then that I saw that he was as affected as I was—flushed cheeks, his breath coming fast, his eyes dark and drunk with desire.
--Brenna Aubrey, At Any Price

She climbed to her feet and leaned into him, tracing the scar above his eye. “I like this scar.”

He chuckled and dropped his cheek into her hand. “Glad it pleases someone. It didn’t feel too good when it happened.”

“I don’t like it because you were hurt. It’s just—it brought you to me. And it reminds me that you’re not the same person I met years ago. That we’ve both changed… However”—she grinned saucily—“scars are pretty hot.”

He tugged at her top and kissed her collarbone, tickling her with his lips, because the naughty man had quickly discovered a sensitive spot. “My scar looks hot, does it?”

She laughed as he continued to pepper her skin with light kisses. She lifted her shoulder in defense. “Very sexy.”

“Is that right?” I stand up too, but my heart beats a little faster when I take him in. He’s wearing a dark gray suit today, a blue shirt that is so light it’s barely a color, and another brilliant cerulean-blue tie that makes his matching eyes shine as they stare into mine.

I don’t know why, but I step backwards. His full attention on me suddenly feels more like a force than a look. He steps forward, hands reaching for me. I bump against the wall, no escape, and then he fists the front of my blouse and rips it open, revealing my silk cami.

My mouth opens in surprise.

He rips the cami apart too. And then, with one forceful whoosh, both garments are lying in a puddle of fabric on the floor.

The intense stare turns to a boyish smile. “I’d like you topless for breakfast. And I get to call the shots for our dates.”
--J.A. Huss, Mr. Perfect

“Have lunch with me today. Come on, you’re starving.”

“The work won’t finish itself.”

“Maddie, you need to have lunch. And I’d love your company.”

Ah, his tone held that polite bossiness from the first day again, and poof, my resolve vanished. “Oh, I don’t know. Even though, if I do eat with you, I might distract you from calling back your business partner.”

The corners of his lips twitched, as if he were laughing at a private joke.

Landon rose from the bench and motioned with his head toward the house. “By all means, go ahead and… distract me.”

The way he said it, in a lower, huskier tone, made it sound dirty. I parted my lips, exhaling. Was Landon flirting with me? Or was my mind playing tricks on me because I’d been perving at him since he arrived? That look he gave me earlier, though… I thought he’d been doing some perving too. In any case, the smart course of action was to remain outside, work through lunch.

Instead, I wanted to follow him inside. Everything about him beckoned to me; the pull I felt toward him was almost magnetic.
--Layla Hagen, Anything For You

Shannon has a key to my place, and as I walk in the door I see candlelight. Flickering flame is to a man what Ben & Jerry’s is to a woman. A sign of a sure thing.

“Shannon?” I call out, following the disorganized scatter of lit candles in the living room. Shadows dance on the wall in my hallway, and I round the corner to my bedroom to find her, spread out on my bed, wearing garters, stockings, the red corset, and—

She’s asleep. That’s okay. I can work with asleep. I can’t work with absent.

You’d be surprised how fast a man can undress when under the complete control of testicles so full they look like a case of mumps. I’m out of my clothes in seventeen seconds or so (who’s counting?) and on the bed, my hands taking in her prone body.

Her skin is so soft, my fingers scraping against the rolling contour of her inner thigh, from knee to heaven. The whorls of ridges on my fingertips feel like raw sandpaper against her porcelain flesh. My breathing slows, eyes adjusting to the dim light, taking in her body. How did I ever get so lucky?

From Toilet Girl to Mrs. McCormick in eighteen months.
--Julia Kent, Shopping for a Billionaire's Fiancee

Wall Street boardroom with Smuckers in my lap. And my neighbor’s son, Henry Locke, aka New York’s most eligible bachelor, glaring across the table at me. Rumor has it Henry’s a business genius who’s as talented in the bedroom as he is in the boardroom.

He’s arrogant and infuriating. He refuses to listen to me when I insist I didn’t con his mother.

He thinks he can bully me, buy me off, control me, even seduce me.
― Annika Martin, Most Eligible Billionaire 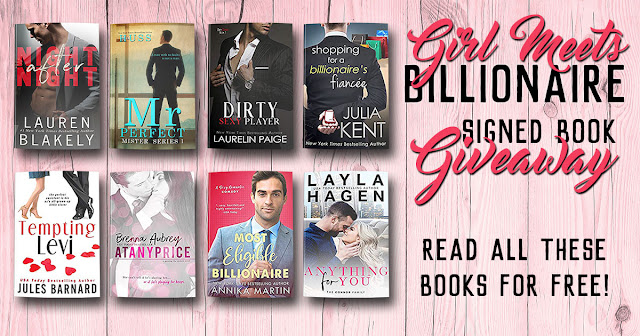