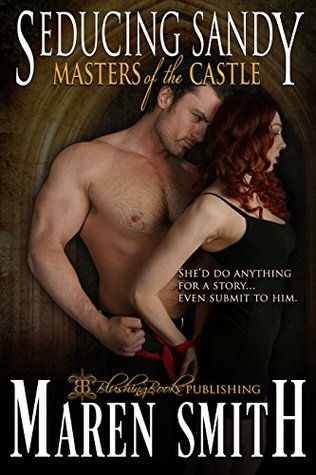 She’d do anything for a story… Even submit to him.

Especially when it comes to Master Reeve, whose rough touch and dark authority make her body respond in ways she’s not at all prepared to understand. Sandy will do anything to get her story, and that includes pretending to be his submissive. What she doesn’t yet know is how much of what she’s doing is really ‘let’s pretend’ and how much is the real her, giving her heart to a man she has every intention of betraying.

Publisher’s Note: Like all the other stories in the Masters of the Castle series, this contemporary romance can be enjoyed as a standalone. It contains elements of power exchange, explicit language, and MFM ménage scenes.


“I… I’m sorry,” she said, her voice so trembling and small that he had to lean in just to hear it.
“Are you?” Reeve countered, continuing his lazy circle around her. “I wonder what for?”

“She must have a guilty conscience,” Eric suggested, also circling. She was turning with them, trying so hard to keep them both in view. “People rarely apologize unless they know they’ve done wrong.”
Sandy shook her head. “I haven’t done anything.”

Oh, but she had, and he knew it. So did Eric. By nightfall, everyone within the chain of command here would know it, too, and they would be on their guard, watching for her. Not that there was anything in or on Castle grounds that was illegal. Immoral, maybe, depending on who did the judging. But leave it to a vanilla to come waltzing into his home, magnifying glass out and ready to start casting her unasked-for opinions all over everyone and every act she saw.

That’s what irritated him the most. This was his home; this was not just a job. This was his way of life. He enjoyed beating ass. He liked to tie women up, bite, pinch, slap, pull hair, and fuck hard, both for punishment as well as for pleasure. He liked to make a woman come, over and over again until they were too weak even to cry out. He liked to take them right to pleasure’s razor-sharp edge and not let them come, over and over until they were heaving in their bonds and sobbing with need. He did not like being judged for it and anyone who did that, in his opinion, was a hypocrite. Nobody’s sex life was pure missionary all the time. Those who condemned porn almost always watched it. Those who snuck their way into his house on false pretenses, hoping to catch them all in some dirty little act—perhaps even to snap photographs to print in her paper later on—well, that person not only deserved to get the shit scared out of her, but she deserved to get sued beyond all financial recovery. She and the paper she worked for.

“You don’t think you’ve done anything wrong,” Reeve echoed, keeping his tone light and playful. It took everything he had. He didn’t like liars, and she was telling a whopper right to his face. Those nervous hands of hers betrayed her guilt. She kept catching at her fingers, twisting and wringing them. The more he circled, the tighter she squeezed. “You know what happens to little girls who lie, don’t you?”

“They get put over Daddy’s knee and spanked,” Eric leaned in behind her to answer, whispering ‘Daddy’ and ‘spanked’ with silken emphasis in her ear.

Sandy jerked away from him, one hand dashing up to scrub at her ear. Faster than Reeve could blink, the nervous submissive vanished, leaving an angry one behind to knuckle her hands into her hips as she rounded on Eric. “Well, thank God I’m not a little girl, then, huh? Daddy, my ass. Tell me, is there a consequence for jackasses who like to bully the people they’re supposed to be showing a good time? Bend over, buster, maybe I ought to spank you two instead!”

The transformation was as startling as it was oddly glorious. Reeve stopped circling. For a moment, he just stared. So did Eric. As if suddenly realizing what she’d done, twin spots of bright color flooded Sandy’s cheeks. “Um…” She cleared her throat, bravado visibly crumbling. In a very small voice, she tried again, “I, uh… I mean, yes, um, please, Daddy. Uh…” She winced. “May I have another?”

Visit me on Tumblr: https://www.tumblr.com/blog/authormarensmith