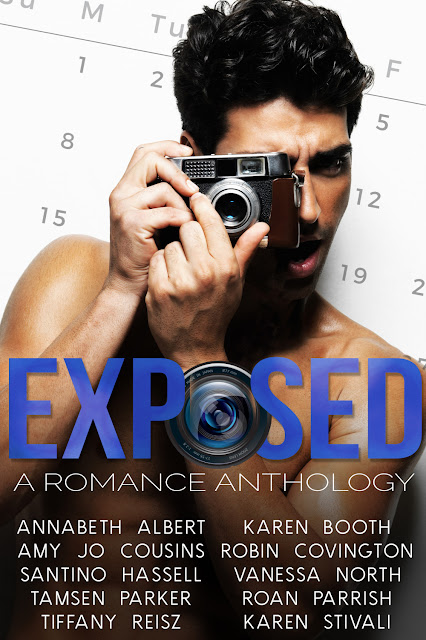 When the sexiest Top 30 Under 30 men agree to pose naked for the "Expose Yourself To A Good Book" charity calendar, their hot bodies aren't the only thing that gets EXPOSED. Ten brand new romances with M/F, M/M, F/F and menage pairings from bestselling and award winning authors, there's something for everyone in this limited-release anthology.

Jason "Still" Waters' life looks perfect from the outside—money, fame, and the words "World Champion Bull-Rider" after his name. But Jason has a secret, one he never planned on telling anybody...until he meets Simone. She's the kinky girl of his dreams...and his conservative family's worst nightmare.

LEVEL UP by Annabeth Albert
When Landon, a genius physicist, is picked for a charity calendar, he must deal with an inconvenient attraction to Bailey, his rising-star photographer. Can he slay enough demons from his past to ensure a future together with him?

WISHING by Karen Booth
Jobless and painfully single, Samantha agrees to drive musician Duncan to a photo shoot. He’s in town for only five days, so sexy, and she’s eager for a no-strings fling. But Duncan shoots straight for the heart, making her unsure how she’ll ever survive his goodbye.

KATE LIKES GIRLS by Amy Jo Cousins
Garden center manager Kate Rhee is on a mission. No more hook ups with women or second-guessing her recent break up with an unavailable man. Too bad the foxy, pink-haired bar owner she meets at a naked calendar photo shoot has sworn off girlfriends. Because Kate isn’t doing casual. She can totally resist that temptation. Totally.

GHOST by Robin Covington
Oliver Burns publicly bragged he’d sign the reclusive artist “G”- creator of the First Nations graphic novel, Ghost Warriors - to his comic publishing company. But that gets tough when “G” is Gareth Rain – the man he pulled a post-one-night-stand runner on years ago and the man he’s never forgotten.

UNDOING THE DARLING by Santino Hassell
Frustrated reporter Tatyana Rush reluctantly agrees to cover the calendar shoot of Jonathan Fox—journalism’s newest darling. She resents his overnight success, but her attitude changes when she realizes Fox hopes to use her article to come out as bisexual … and that he's had a crush on her for years.

RIGGED by Vanessa North
For Kaitlyn, seeing her best friend Gordon naked is no big deal—until watching Sean tie him up changes everything.

THROWN OFF TRACK by Tamsen Parker
Teague has been License to Game’s bassist for over a decade, during which time he’s slept with almost everyone in his path. But it’s always felt like going through the motions. Until he sees his bandmate Christian naked at a charity photoshoot and suddenly, he knows what it is to want.

LEGAL BRIEFS by Karen Stivali
When organizing a naked charity calendar puts Rose's tenure bid in jeopardy, the last person she wants help from is Michael, the gorgeous, arrogant lawyer she butted heads with during his shoot. He'll defend her for free, but if their secrets come out they could both pay with their hearts.