READ DEEP UNDER ON KINDLE UNLIMITED NOW:
http://mybook.to/DeepUnderAmazon
This title will return to all platforms in two weeks! 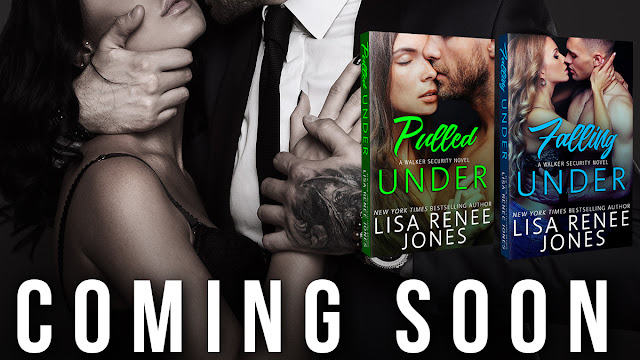 PULLED UNDER - NOVEMBER 28, 2017
He is blond, tattooed, and dangerous. She's as beautiful as she is mysterious and could be his destruction...
Asher wasn't always a member of the elite Walker Security team, he was a billionaire's son, who rebelled against his father's controlling hand, and ended up in New York City's underground of drugs, rock n roll, and danger. But that is long behind him, and while his tattoos and long blond hair remain, he's now a chameleon, far more comfortable in a suit and tie than a leather jacket.

Or so he likes to tell himself.

But now Walker Security needs him back inside the underground club scene for a police case they're working. Women are dying, murdered, and the clock is ticking until another victim is claimed. When Asher is pulled back into this toxic world he meets Sierra, who is as beautiful as she is mysterious. A woman who calls to a darker side of him, long suppressed, unleashing it in what becomes wicked hot passion and obsession. But Sierra has a secret, one that leads her, and Asher, to a dangerous place, and game, with dangerous players, and the game is about life or death.

FALLING UNDER - JANUARY 23, 2018
Ex-special forces, Jacob King, is a man who keeps to himself, having learned the hard way that letting people close to you, trusting them, might just get you killed. A lesson he learned when members of his Special Ops team turned dirty, while others, men he considered friends, died. He made them pay. He made them hurt. He put them in jail. And so he doesn't trust anyone anymore. He keeps his women hot and fast, his friends few to none, and his clients through the elite Walker Security at a professional distance, but safe. It works for him. Until it doesn't.His newest job should be simple and cut and dry. Jewel Carpenter, the daughter of the CEO of Carpenter Enterprises, is receiving death threats. He's to protect her and find out who is issuing the treats.Simple. Cut and Dry.Until it's not.

Until the chemistry between he and Jewel is all about love, hate, and sex. But even as he fights the attraction to Jewel and discovers there is more to her than meets the eye, the real threat comes not from the threats she's receiving, but the connection she has to him. Because his past has come full circle, and those men he's made pay for their sins now want him to pay. And what better way than the woman in his bed?