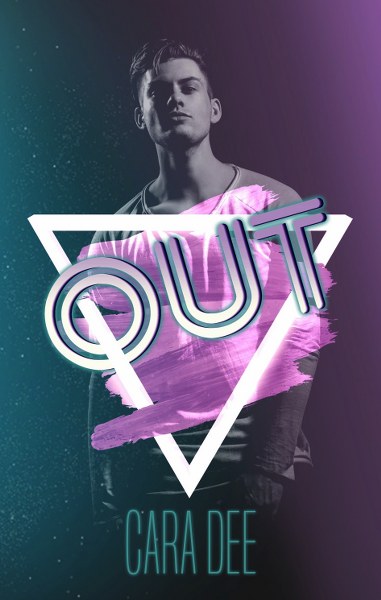 "I guess I always figured coming out was something you did for friends and family, and maybe it is, but it’s personal too, you know? The person I was last night is new. I wanna get to know him.”

I had two things on my list when I arrived in Los Angeles. One, trackdown Henry Bennington, the uncle and guardian of my little brother’s best friend, and tell him to get his ass back to Washington. He needed to do something about his nephew, who was turning into a douchebag. And two, figure out just how non-straight I was. For the past two years, I’d had all these fantasies, and now was the time to explore them, far away from my sleepy little town.

Nowhere on this list did it say, “Get Ty’s uncle into bed and fall for him.” I wasn’t supposed to fall in love with another city either. But between brunch, making new friends, and discovering the man I was meant to be, I lost sight of the future that had once seemed pretty damn vivid. How the hell was I supposed to merge my old life and who I used to be with the new dreams Los Angeles and Henry had awakened in me? 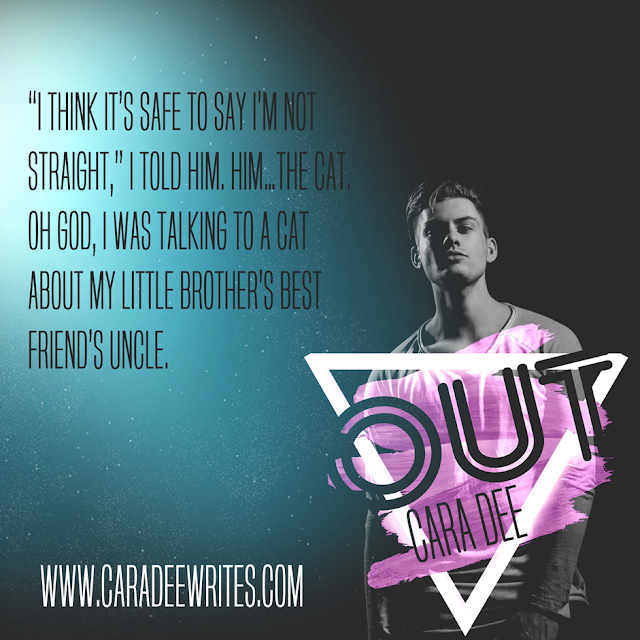 Excerpt from Out by Cara Dee

“I have a question, Zach,” Martin said.
“You can’t buy me new pants, man,” I replied.
The two men shared a stunned expression before amusement took over, and I felt bold. Comfortable, most of all. I smirked and shifted in my seat, then dug back into my food.
After the chuckles had died down, Martin faced Henry with a serious look. “I want to keep him. Don’t tell me I can’t.”
Even Henry smiled at that.
“But no, you rascal, that wasn’t what I wanted to ask,” Martin told me. “Although, I’ll certainly try again later. My question is about next week. Will you be doing any sightseeing?”
I hadn’t really thought about that. I was here to explore something else. That said, it would be cool to see some of the stuff I’d watched on TV. The Hollywood sign, Santa Monica Pier, and Venice.
“Maybe some.” I chewed slowly, guessing this was an opportunity to try some of that honesty. My stomach did a somersault, and my hunger faded momentarily. I had to jump, though. I’d regret it if I didn’t. “Ehm, the thing is…” I cleared my throat and reached for a wineglass. Condensation had fogged the surface, and I took a big gulp of it. I wasn’t much of a wine drinker, but it did the trick. “I was wondering…um, what’s West Hollywood like?”
I’d heard it was a neighborhood with a strong gay culture. A gayborhood, if you will.
You learned the weirdest terms online. I still wasn’t sure what the difference was between twinks and twunks.
Henry had grown still, and he put down his lobster roll and wiped his mouth with a napkin. He didn’t look super comfortable.
Martin eyed me up and down, a small smirk playing on his lips. “So perhaps you don’t have a girlfriend at home.”
I shook my head no.
Looked like all I had to do was mention West Hollywood and they knew where I was going with this.
Martin patted my hand. “Hon, is this new to you?”
“Very.” I managed a weak smile, and my heart pounded. “I don’t want to suppress it, though. I’ve had these thoughts for two years. I wanna find out.”
If I didn’t know any better, he looked proud. It didn’t make sense. With their obvious surprise settling, they started eating again. At least Martin did. Henry seemed more interested in his wine.
My guess was it was a sensitive topic for him because of how he’d been treated when he came out.
I didn’t know Martin’s history.
“How old are you?” Martin asked. “Twenty-two, twenty-three?”
I nearly balked. I didn’t look that fucking young, did I? “I’m twenty-seven!”
He waved a hand. “Semantics for me.” Thoughtful and chewing, he looked at his friend. “What do you think, Henry? We can’t in good conscience send him to WeHo clubs.”
“Definitely not.” Henry’s voice was quiet, yet firm. As if the idea was ludicrous. “They’ll eat him alive.”
“Do you go there? To the clubs there, I mean.” I glanced between the two.
Henry’s mouth twisted up.
Martin laughed outright. “Oh no, dear. We’ve aged out of the system.”
I wanted Henry’s take on things. Despite his evident discomfort, I looked at him in question. Teach me. Or hell, kiss me if you won’t tell me where to go. Okay, perhaps that would make him more uncomfortable.
He surrendered with a sigh, and he put down his food once more. “West Hollywood’s clubs might be too much if you’re just testing the waters and want to take things slowly. Their scene is a meat market. Not that I’ve been there in ages. As Martin pointed out, we’re not part of the demographic anymore.”
“We’re too old,” Martin supplied.
Henry shot him a frustrated look. “Thank you for reminding me.”
“You’re very welcome,” he replied, and I couldn’t help but grin. “Henry’s right, Zach. If you want sexy go-go boys and a round of Dude, Where’s My Car when you wake up not knowing where you are, those clubs are perfect.” He made a dismissive gesture with his hand. “Of course, you can find low-key bars as well, and many of my friends have settled down in domesticated gay heaven there, but we can probably find you a nice gay bar on the westside, too.”
West Hollywood wasn’t west enough?
Henry inclined his head. “There’s no need to dive straight into the club scene.” He paused. “You haven’t visited any gay-friendly bars at home?”
I shook my head. “I’m not…hiding, per se. But I haven’t been comfortable yet.”
If I came home with a boyfriend, I didn’t believe I’d face many problems. My nana was open-minded and accepting, and Mattie had friends who were already out. I just…I guessed I was one of those guys who liked to process things on my own first, and this was the option with which I was most at ease. I wouldn’t be on my own, but I would be away from everyone I knew.
“So a chill bar or something,” I said, getting us back on track. “Will you guys go with me?”
“Abso-fucking-lutely, darling.” Martin nodded and licked filling off his finger.
“Thank you.” I was relieved.
“Wait for it,” Henry muttered.
I frowned in confusion, and Martin’s eyes landed on me, his expression gleeful.
“You can’t go to a gay bar like that,” he said.
Goddammit.
“You’re talking about shopping, aren't you?” My shoulders slumped. I didn’t know squat about fashion, and I wasn’t very interested.
“I am, yes, and it’s nonnegotiable.” He was too smug.
I agreed with his terms, though. I wanted to experience as much as possible. Even if it meant shopping.
“Can we go today?” I asked.
Martin laughed softly. “Boy’s eager, Henry.”
Henry merely hummed and took a swig of his wine. 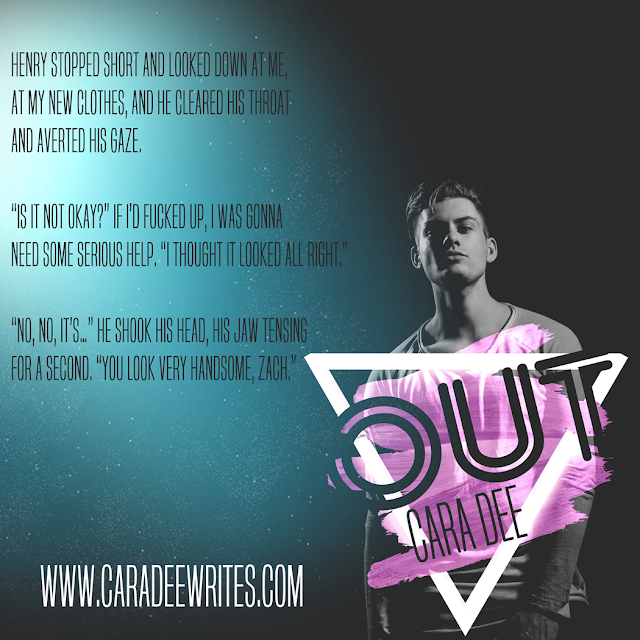 This being my first book by Cara Dee had me a little confused, I knew it was a standalone but I had a feeling it was part of a series, quite possibly a spin-off of another series, and I felt that way because there was so much I wanted to know about the other couples that popped up throughout the story.

This story focuses on Zach and Henry and let me tell you how much I loved them....I loved them so much that when the book ended I was sad, I wanted more of these two lovable men not to mention Henry's bestie Martin, who really need to find his HEA soon!!! But that sadness was soon replaced with anticipation because of a note from the author that said "That little epilogue up there wasn't enough for me. I wanted more than to just tie up loose ends, but when I started writing the original epilogue, a few pages quickly turned into 20,000 words. I don't want to delete any of it. I want a sweet, dirty, funny, and Christmassy sequel with just a bit of drama" she goes on to tell us that "Out for the Holidays: An Out Novella will be published on December 12th, 2017 and I cannot wait! Ok, sorry, it looks like I have wondered off the beaten path there but I am really looking forward to more of these two.

Zach lives in the small town of Casammia Cove, where he is raising his brother Mattie and running the family store. Mattie's best friend is getting out of control so Zach goes to California to find his Uncle in the hopes he will be able to help out with his nephew along with maybe helping Zach find his true self. You see Zach has been having thoughts for a while now that make him think that maybe, just maybe he may be gay.

There's an instant attraction between Henry and Zach but Henry is quite a bit older so its a no-go for him...well that what he keeps telling himself anyway. Watching Zach find himself with the help of Martin and Henry was great, bringing Zach to a gay nightclub was like bringing a kid to a candy store...so much to choose from but what he really wants is out of reach, or is it? It does take a while for Henry to finally give into his own wants and needs and believe me once he does its fantastic.

The chemistry was phenomenal between the two, and as I mentioned earlier there are a lot of secondary and tertiary characters that I really want to know more about some of them already found their HEAs so I will go back and read their stories and the ones that haven't found their HEAs yet will be on my radar. I have to admit this was very close to a five star read for me but there were just a couple of things that I didn't like about the story, I am not going to mention them because I don't feel the need to since they are just minor issues and didn't take away from the overall picture of things. I would recommend this book to anyone that enjoys a good MM read. 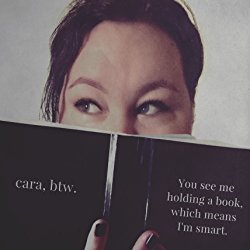 I'm often stoically silent or, if the topic interests me, a chronic rambler. In other words, I can discuss writing forever and ever. Fiction, in particular. The love story—while a huge draw and constantly present—is secondary for me, because there's so much more to writing romance fiction than just making two (or more) people fall in love and have hot sex. There's a world to build, characters to develop, interests to create, and a topic or two to research thoroughly. Every book is a challenge for me, an opportunity to learn something new, and a puzzle to piece together. I want my characters to come to life, and the only way I know to do that is to give them substance—passions, history, goals, quirks, and strong opinions—and to let them evolve. Additionally, I want my men and women to be relatable. That means allowing room for everyday problems and, for lack of a better word, flaws. My characters will never be perfect.


Wait…this was supposed to be about me, not my writing.
I'm a writey person who loves to write. Always wanderlusting, twitterpating, kinking, and geeking. Advocate for equality and Autism awareness. There's time for hockey and cupcakes, too. But mostly, I just love to write.

(10) ebook copies of the following titles in her Camassia Cove series.
at October 29, 2017