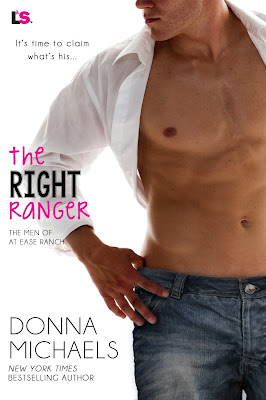 The Men of At Ease Ranch #3 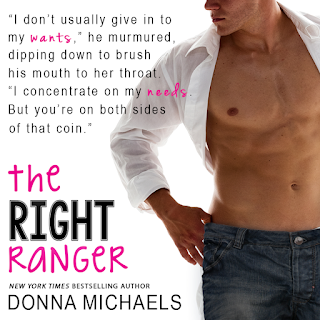 BlurbHaley Wagner’s life just got a lot more complicated. As if turning her struggling ranch around isn’t tough enough, she’s forced to call him for help. With his hard eyes and even harder body, Cord is an irritatingly sexy contradiction of hot and cold. How can she possibly hide her embarrassing secret when just looking at Cord is a combustible event?
Former Army Ranger Cord Brannigan has a secret, too. He promised his fallen teammate he’d protect the tempting, fiercely independent Haley from a distance, but now they’re stuck together for three weeks. Alone. Keeping his hands off will take every ounce of control he can muster. And that control is slipping…
Link to Follow Tour:  http://tastybooktours.com/tours-master/right-ranger-donna-michaels
Goodreads Link: https://www.goodreads.com/book/show/34964263-the-right-ranger   Goodreads Series Link https://www.goodreads.com/series/193625-the-men-of-at-ease-ranch 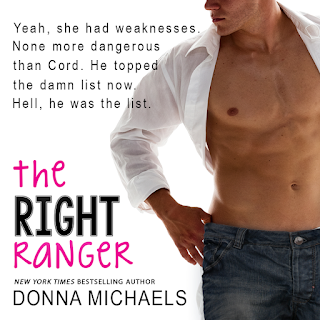 I have been waiting for Cord and Haley's story for a while and even though it wasn't smooth sailing for them it was a great ride.

Cord had always felt an attraction towards Haley, but even though she's been a widow for over two years neither one will act on their attraction out of a sense of Honor and the secrets they both held about her late husband who was a friend and fellow Army Ranger of Cord's.
If you have read any of the other books in the series you will know a little bit about Cord, but there is oh so much more to know, The Right Ranger takes us on the journey into Cord's past and answers some major questions I had about him including why he always had his guard up.

The chemistry between Haley and Cord was phenomenal. I didn't see how Cord thought he would be able to live under the same roof as Haley for three weeks and not act on their attraction, but I would give him a A just for trying ;) 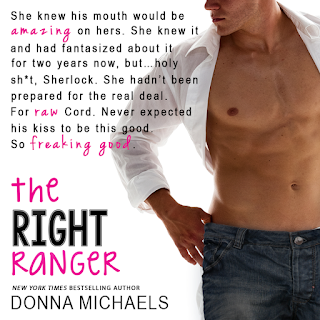 Excerpt
As soon as he cut the engine outside the barn, he heard a large crash from inside followed by a slew of curses.
Haley.
With his gut knotted tight, he crossed the yard and entered on a sprint. “Haley…Jesus,” he muttered, finding her underneath a pegboard and a pile of tools. Sharp ones. Shit.
“Now you show up,” she scoffed.
He hoisted the peg board and tossed it aside. “What the hell happened?”
“Had a fight with a wall and lost.” A smirk twitched her full lips and gleamed in her whiskey gaze.
“That’s not funny.”
“Damn straight.” She frowned. “It hurts like a bitch.”
He ran a hand through his hair. “How the hell did you manage to knock this over?”
“Quite well, actually.”
Smartass.
He knelt beside her and leveled his gaze on her. “That’s not what I meant, and you know it.”
“Did I?” She tipped her chin and narrowed her eyes. “Hard to tell underneath all that accusation and condemnation dripping from your tone. I’m not one of your Rangers, Warlock. That hard stare of yours won’t work on me.”
Christ. He didn’t need this shit.
She made to get up, pushing a few tools out of the way, and that’s when he noticed the blood dripping down her arm.
“Stay still,” he ordered, grasping her unharmed arm to hold her steady. “Let me have a look.”
A quick inspection deemed it deep but not stitch-worthy, thank God. He yanked off his shirt and wrapped it around her arm, ignoring her gasp as he tied it tight until he could get her in the house for some proper first aid. But he didn’t want her moving until he examined the rest of her body for injuries.
With his training kicking in, he ran his hands over her, noting a small cut on her cheek, another on the back of her hand, and a bruise on her other wrist, no doubt from covering her face.
“You okay?” he asked, staring into her dazed eyes. “Are you hurt anywhere else?”
She blinked and focused her gaze on his face, then shook her head after she opened her mouth and nothing came out.
Christ.
His insides twisted when he took in the mash of clippers, hammers, screwdrivers, and pliers scattered around them. She was lucky. So damn lucky.
After helping her to her feet, he bent to scoop her in his arms.
“W-what are you doing?” She wiggled as he carried her across the yard, trying his damndest not to notice the soft curves brushing his chest.
“Taking you inside to fix your arm. Stay still.” Awareness already spread through his body, waking up parts that had no business enjoying the feel of his dead friend’s widow cradled against him.
Haley grunted. “I can walk.”
“Good to know,” he replied, but continued to hold her as he stepped onto the porch. “Get the door.”
With a loud sigh, she reached out and twisted the knob. “Okay, you can put me down now.”
“Where’s your first aid kit?” he asked, ignoring her protests.
She closed her mouth and stared at him, her eyes twin pools of pissed-off brown. God, she was gorgeous. And damn, he did not need to have his arms full of her hot curves.
He muttered an oath. “You can keep quiet all you want, but I’m just going to stand here and hold you until you tell me.”
Even if it killed him. 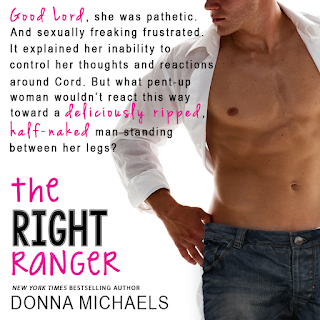 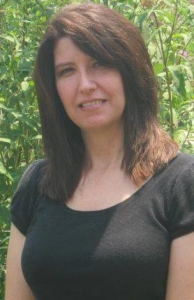 Author Info
Donna Michaels is an award winning, New York Times & USA Today bestselling author of Romaginative fiction. Her hot, humorous, and heartwarming stories include cowboys, men in uniform, and some sexy, primal alphas. With a husband in the military fulltime, and a household of nine, she never runs out of material to write, and has rightfully earned the nickname Lucy…and sometimes Ethel. From short to epic, her books entertain readers across a variety of sub-genres, and one has even being hand drawn into a Japanese translation. Now, if only she could read it.

Describe yourself in five words or less.
I love to entertain readers.
Name one thing you won’t leave home without.
My cellphone. Yep, I’m one of them. But only because I am usually waiting for an email or message from an author, publisher, editor…etc, and need to multitask my personal life errands into my day, too.
What types of scenes are your most favorite to write?
My favorite scenes to write are the sparring scenes between the hero and heroine. When the hero has met his match, or vice versa . There were several of those scenes in The Right Ranger.
Are there certain characters you would like to go back to, or is there a theme or idea you’d love to work with?
Yes, there are several characters I’d love to go back to, but shhh…don’t tell my other ones. The two that immediately come to mind are Kit Katt and Pierce DeVein from my humorous paranormal, The Spy Who Fanged Me. They are agents from different departments. She’s a black panther shifter and he’s a vampire and they’re forced to work together to bring down a dangerous gnome. Kit was by far the most fun I ever had writing a heroine. Between her can do attitude, her capabilities, and the fact she has catlike tendencies that get in the way at the most inopportune times, I would love to write another mission for her and her man/vampire. 😊
Can you tell us about your upcoming book?
Right now, I’m writing book 4 in The Men of At Ease Ranch series. This is Vince’s book. He’s been the easygoing happy guy throughout the series, and longs to have a relationship like his buddies have found. But, it’s like they say, be careful what you wish for. He’s discovering that his idea of the ideal significant other is flawed, relationships aren’t always easy, and they come when you least expect it. He is definitely one of my fun characters to write.