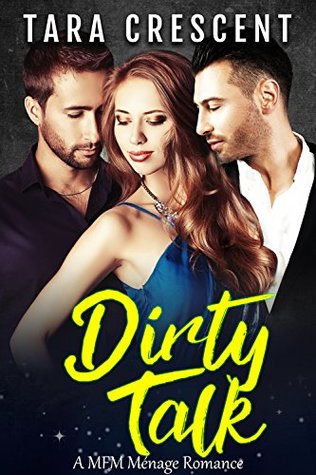 A standalone romance with an HEA ending and no cliffhangers.


James Fowler and Lucas Bennett are the sexiest guys in New Summit. Vloggers, celebrities and hosts of the hottest, steamiest show on the internet. Dirty Talk.

I might be a teeny bit attracted to them.

Oh, who am I kidding? I can’t get enough of them. They’re two huge temptations and I can’t resist.

And they’re in my coffee shop every day, enticing me, calling to me, whispering that a little sin won’t matter…

Because I’m at the brink of getting everything I’ve ever wanted, and James and Lucas are just a distraction.

This quick read was pretty steamy!
If you read Dirty Therapy (You can see my review here) then you've met Cassie before. Cassie is Mia's best friend as well as the the owner of the little town of New Summit's Coffee & Bakery Shop.
Cassie is still trying to overcome her childhood, she was called trailer trash by her classmates because her mother would enter her into beauty pageants. Lets face it, kids are harsh and the group of "Popular Girls" that were in her school were the worst. I would love to see them get whats cumming to them...you know the saying that "Karma's a Bitch" well I think it's time that Karma made her appearance.

Cassie's an interesting character although she is lusting over James and Lucas she will not go out with them, separately or together. You'll have to read the book to find out exactly why, but I really liked James and Lucas they were not only HOT but they had a strong sense of honor, if they told you something you could take it to the bank because they would stand by what they say.