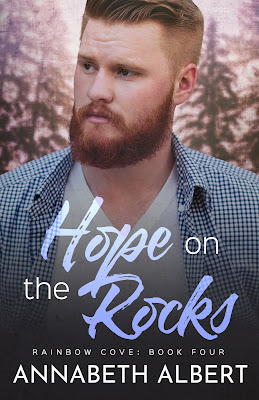 One too many…
Doctor Quinn Strauss is beloved by his small-town patients. He almost never drinks, especially not alone on a weeknight. But he’s heartbroken over an unexpected reminder of exactly how much his bad breakup has cost him. And the sexy ginger bartender keeps making him special drinks that go down a little too easy.

Take a drunk doc home…
Bartender Adam Ringer can tell when someone’s hurting, and the heroic local doctor is practically radiating pain. Adam’s a natural caretaker and can’t help but spring to Quinn’s rescue. And when the drunk and rambling Quinn reveals a mutual sexy interest, Adam’s other instincts are intrigued. He can’t wait for Quinn to sober up.

All mixed up…
When Adam offers Quinn a chance to explore secret desires he’s long repressed, Quinn finds himself saying yes to a summer fling with the younger Daddy bear. Falling in love isn’t part of the plan, but amid all their steamy encounters and intimate exchanges, a deep, emotional bond is forged. Summer is nearly over. Real life pressures are mounting. Can they grow enough to find a way to forever?

Hope on the Rocks is a brand-new, full-length Rainbow Cove novel featuring a younger Daddy and a doctor convinced he’s too old to follow his secret desires. Contains a lot of sexy exploration, opposites attract, loads of feels, and a guaranteed happy ending. No age play or cliffhangers! 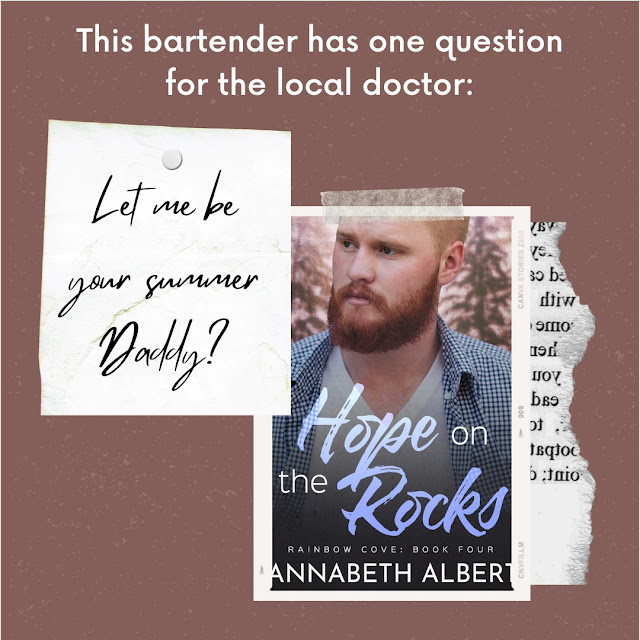 An exclusive excerpt of Hope on the Rocks from Annabeth Albert! I love writing first kisses more than just about anything else, Enjoy this steamy peek at the book!


****
Forget nervous knees and sweaty palms. The thrum of desire as Adam went to sit at the foot of the bed made me feel powerful. Sexy. “You should.” I moved closer, biting back a yes, please, Daddy. He so looked the part too, all hot ginger lumberjack Daddy, raking his gaze over me as he tugged me to stand right in front of him, shins brushing.
“I will,” he said wolfishly. “Come here.”
Ignoring my startled noise, he hauled me into his lap. His big, comfortable, almost overwhelmingly sexy lap. He smelled good, woodsy, like his sheets and soap and his chest that was solid against my side.
“Oh. Uh…hello.” I struggled with the urge to sink into him completely, afraid if I did, I might never want to leave his embrace.
“Hi.” Adam chuckled at my ridiculousness and brushed his face against my temple and hair. “Knew you’d fit perfectly.”
“Thanks.” I exhaled hard, that need to let go winning. Hours of tension left me in one gust. His sturdy thighs and muscular arms truly were the ideal resting spot. And when he tenderly turned my face toward his, I went easily, awkwardness melting away with the force of how much I wanted this.
“Where do you stand on kissing?” His voice was even sexier now, low and dark.
“I like it.” My answer was perhaps a bit too quick, as if he might rescind the offer if I took too long deciding.
“Good.” He brushed his mouth against mine, the tickle of his beard contrasting with the soft fullness of his mouth. Earlier, when he’d threatened to make me scream, I’d expected a headlong rush into hot and heavy, the quickie he’d promised.
But this wasn’t a quickie.
No, this was a damn banquet of sensation, a slow feast. The press of his mouth made me tingle all over, heartrate doing that tachycardiac double-time beat, every sense heightened. The way he held me meant I could feel his heart pounding with that same dizzying rhythm. Delicately, he traced my lips with his tongue, a whisper of a tease, none of his usual brashness.
“Oh.” I parted my lips with an involuntary gasp, welcoming the invasion of his tongue like I’d been waiting years for this moment. And maybe I had. I was thirty-five, and I’d never been kissed quite like this. Adam kissed like we’d have decades to get this right, and like learning what I liked mattered. The movement of his tongue against mine returned my body temperature to supernova level, and when he tugged lightly on my lower lip, my cock started to throb. More soft sounds escaped my throat, each one seeming to embolden him further.
He used his lips and teeth and tongue to coax more and more sounds from me as the kiss built and built. I clung to him, literally shaking with how good it felt.
“Wow.” My voice was all breathless.
“Wow is right.” He chuckled before kissing me again, deeper this time. His boldness returned, an aggressiveness to his movements that I couldn’t get enough of. He held me tighter as his tongue swept farther into my mouth. I sucked eagerly on his tongue, making him be the one to moan this time.
“More.” I tried to wiggle even closer.
“We good?” he asked as he slid a hand under the back of my T-shirt.
“Oh, yes.” I wanted him to touch me everywhere, and the more he explored my back, the warmer his hand became, each of us igniting the other. As we continued to trade kisses, I let my hands roam too, over his big biceps, across his shoulders, through his beard, eventually digging my fingers into his back when the kissing became so intense that spontaneous combustion was a real risk. 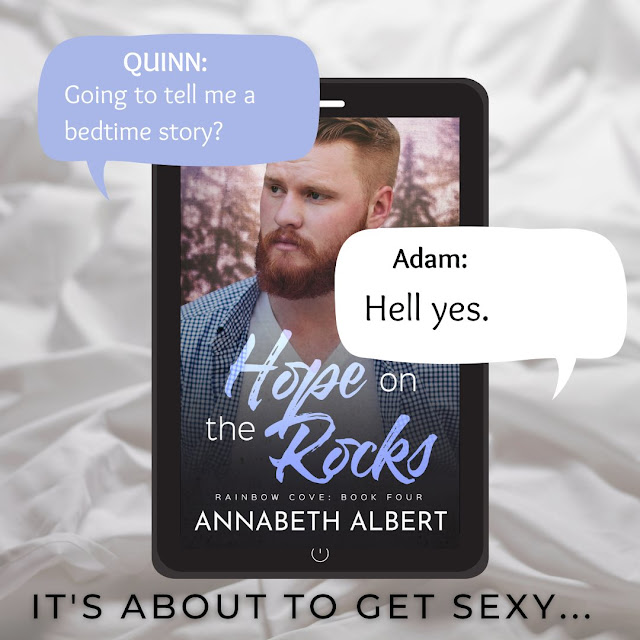 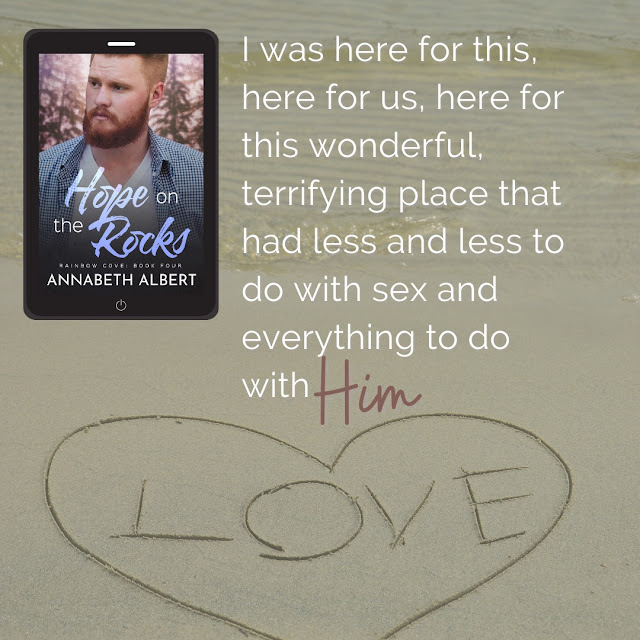 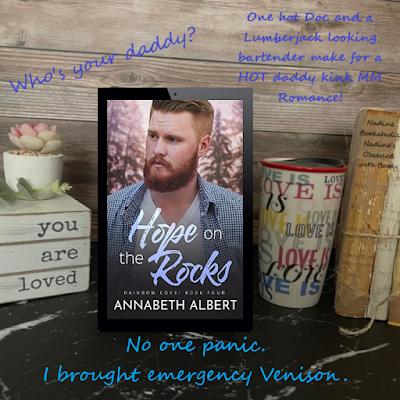 There's a reason I have been a fan of Annabeth Albert's since I first picked up one of her books in 2015 and it's because she pulls you in to each of her stories right from the very first page.
Adam is the bartender and part owner of the Rainbow Tavern with his friends Mason and Logan. He leads a very busy life with his job and helping his mom and sister out all the time, it doesn't leave much room for a relationship but that doesn't mean he hasn't noticed how hot the town's doctor is.
Quinn moved to Rainbow Cove two years ago and has been trying to start over after a bad breakup but when he sees photos on social media of his ex well, he needs a drink and more than one.
I really enjoyed the way Quinn and Adam were together, their affection towards one another went outside of the bedroom even though they agreed to only a summer fling...which usually means no feelings would be involved. Adam was protective and growly while Quinn had his stern doctors voice when needed, they really balanced each other out well, and they were hot as hell.
HOPE ON THE ROCKS is the fourth book in the Rainbow Cove series but can be read as a standalone so if you enjoy MM Romances, Daddy Kink, or are just looking for a steamy MM Romance that is fairly low on angst this is the book for you.
Happy Reading!!!
**I have voluntarily reviewed an Advanced Readers Copy of this book for my Blog, Nadine's Obsessed with Books** 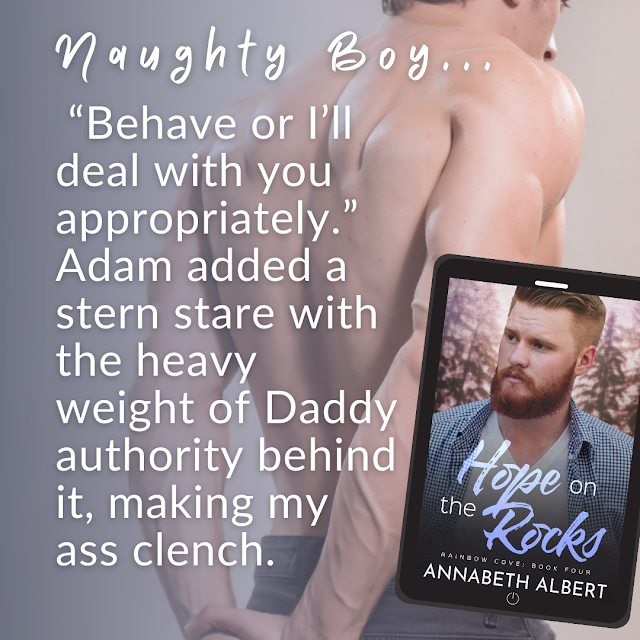