Ever After by Eden French ~ Book Review with Excerpt and Giveaway 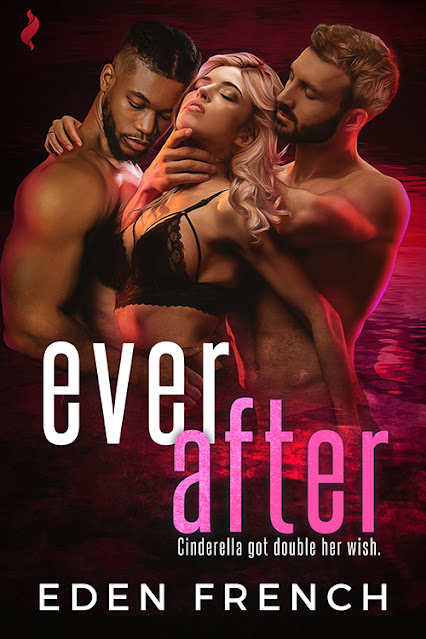 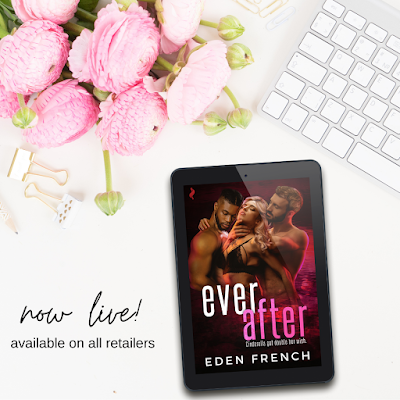 Former heiress Ashe Pembroke can’t believe her life has turned into a freaking cliché, a modern day Cinderella living under the thumb of her ruthless stepmother, hated by her perfect stepsister, and treated as a servant in her own home. Then on her worst day ever, she meets Sebastian Bradford, a handsome prince charming if ever she’s seen one. Their chemistry is hot and instant. But imagine her surprise when he brings along his hunky spec ops lover, Elijah, who issues panty-melting orders in a deep voice like smooth cut velvet. Suddenly her life—and she—is turned upside down in ways she never, ever dreamed of!

The sex is ridiculous. Exciting and…well, just plain mindblowing. The two men are clearly madly in love with each other, and it’s rubbing off on her in all the best ways. They treat her like royalty, and cater to her every sexual fantasy while indulging in a few of their own. As she gets to know Sebastian and Elijah, she finally understands the power of true love, and begins to fight for her freedom. She desperately wants to accept the unique life they are offering her. But is it really possible to fall in love with more than one person at the same time, and together have a happily ever after? 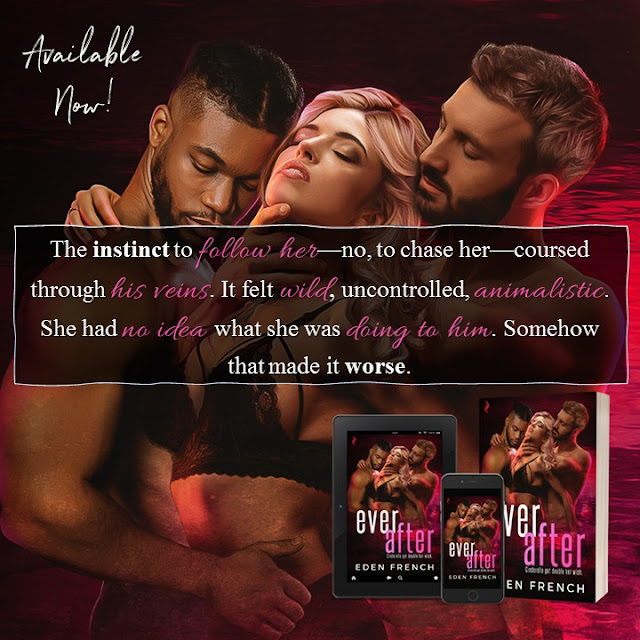 
Sebastian knew kissing Ashe was bold, but hell, he was a Bradford. Some things do pass on. If his father had taught him anything, it was that a well-calculated risk always paid off threefold in the end. And this kiss was as calculated as it got. Yeah, that feigned fall was a little much, but all was fair in love and war, right? He’d come clean with Elijah later.
The spark between his partner and her had been nuclear, but if he knew the man—and after four years of intimacy he was confident he did—Elijah would try to talk and reason and hypothesize the situation until they were well into their thirties. Too long for Sebastian to stand around and do nothing.
He didn’t want to wait until his thirties to move in on this woman. Not when she was right here in front of them with those perfect lips and that golden blond hair. She was totally his type of woman. And here she was all flushed and, Christ, the sexual energy rolled off her in sheets. She was interested.
Possibly in them both.
Elijah just needed a little push. Something to help him take the plunge. And if there was one thing Sebastian was good at, it was making the first move. And always to make an unforgettable first impression. He wrapped his arm tighter around Ashe’s waist and pulled her closer. She didn’t stop him. Not at all. Nope, she pressed her body further against his, her strong, curvy physique completely and totally for him to control. This was exactly what he needed today.
Her breasts pressed against his chest. Perfection. He’d love to have her flat on her back. Or stomach. Or maybe he’d be pressed against her back as she straddled Elijah. He practically came in his pants at the thought.
Jesus, focus.
It was too much. Too much, too soon. Sure, their chemistry was crazy wild, but this kiss was just that. A kiss. Nothing more…at least for now. Just a little something to prove to Elijah that his instinct was correct about this girl.
Elijah could make a split-second decision in all outward matters—a quality honed during his time as a special ops soldier. But he never believed his instincts translated to matters of the heart. For some reason, even after four years, Elijah still questioned the life they had together. Why was that? Sebastian guessed there must be some deep-rooted fear of not deserving to be loved buried somewhere in there, but it wasn’t something they talked about often. Okay, at all. But Sebastian knew Elijah. And this kiss would further prove to him that his instincts were right on target, too.
Her lips were like sweet summer citrus, and as he deepened the kiss and his tongue tasted hers, a fire exploded in his veins. Holy shit. Her entire body trembled under his hands. Fuck hot sexual energy and anticipation. His thigh muscles tightened, and his cock swelled in his shorts.
Okay, then.
It had been quite some time since a woman had captured his sexual interest and emotions this intensely. Hell, getting hit by a Mack truck would have been less intense. Other than a casual orgy or ménage to make things interesting every now and again, Elijah had always been the sole focus of his sex life. Certainly of his heart. Even through all the talk about bringing a third into their lives, it just never seemed to him like it would ever really happen.
But now?
Oh, yeah. This was…filled with possibilities. 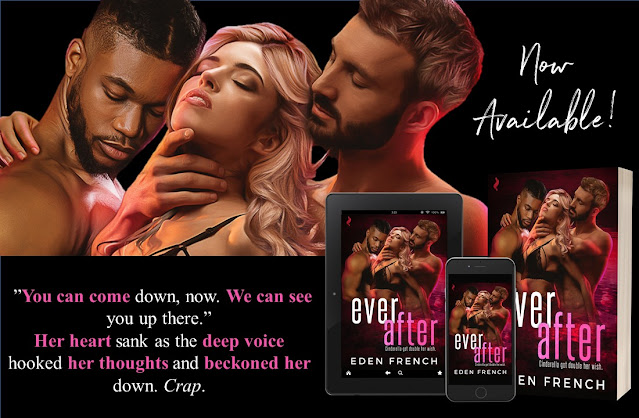 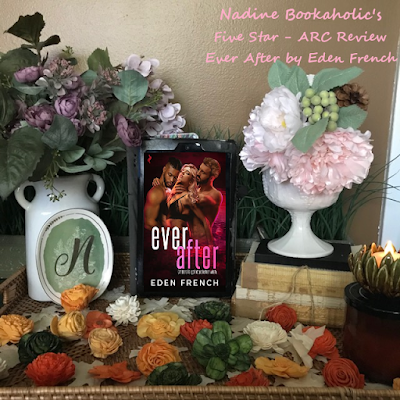 There wasn't anything that I didn't love about this story.
Okay, that's not completely true I hated the way Ashe's stepmother and stepsister treated her but since this is a Cinderella retelling I have to say that even that part was well done.
Elijah was hired four years ago to watch over Sebastian Bradford and shortly after they began a relationship. They are great together but when they meet Ashe it's like they found something they didn't even know was missing, and it was beautiful to watch how all three of them fell in love. But don't think this story is all sugar and sweetness because it really isn't. Both Sebastian and Ashe have parents in their lives that reek havoc on them. The crazy parent of the year award goes to....I let you decide that one after you read the story.
When Elijah and Bastian were with Ashe they worshiped her and revered her and she gave them both everything she had. This story was over 400 pages but I devoured it and wanted more. The sexy time was very steamy and plentiful.
Eden French is a new to me author and she totally blew me away with this book so much so that I have added RED and TAHOE BLUE to my Christmas wish-list. If you enjoy fairy-tale retelling's, menage romances, or triad/polyamorous romances I highly recommend this book to you.
Happy Reading!!!
**I have voluntarily reviewed an Advanced Readers Copy of this book for my Blog, Nadine's Obsessed with Books** 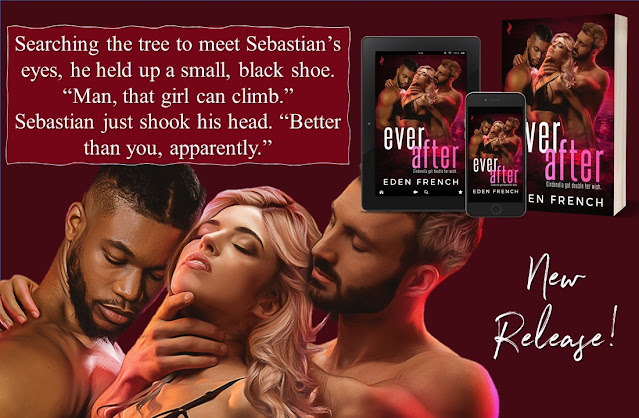 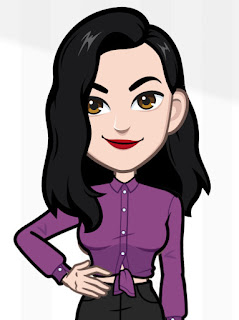 A born and raised California girl, she graduated from San Francisco State University with an English Lit degree, and has a borderline obsession for Mexican food. Eden currently resides in the quirky Pacific Northwest with her amazing spouse and four…yes, four, fur-babies. 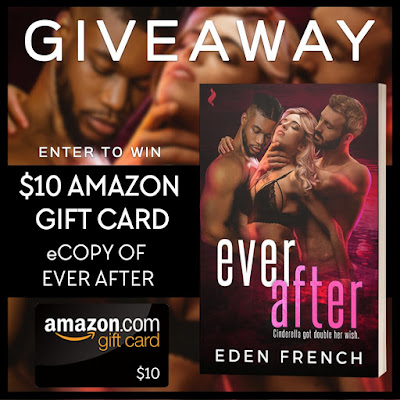