Born from money, Levi was destined to take over the family business. Emmy has always had a crush on her bestie’s big brother, but she hadn’t planned on shaking things up. When a kiss turns into more and a secret is being kept, can they build flawless foundations? Readers will fall in love with this best friend sibling romance from Lauren Helms. The 425 Madison series is back with season two and FLAWLESS FOUNDATIONS is now live!


Only on Amazon + Read for FREE on Kindle Unlimited 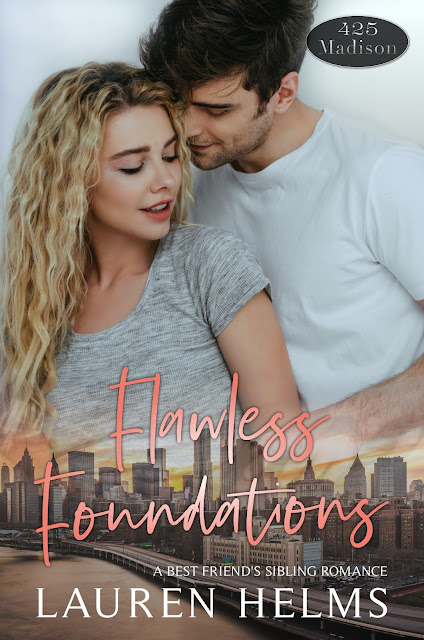 Levi
It's no secret I was born from money. And I'm destined to take over the family business, King Cosmetics when my father retires.

At least that was the plan.

Until my father decided to impose some stupid rule about being married before I take the reigns. Everything I've worked for hangs in the balance and the future of the company is in jeopardy without a King behind the controls.

I never considered Becca part of the plan for taking over, but when one kiss leads to so much more, I can't help but wonder if she's the answer to my problem.

Becca
There are two things I love - my beauty blog and Levi King.

Coming from the same social circle has given me ample opportunity to crush on the next generation of King Cosmetics, but he made it clear a long time ago that I would never be anything more than "like family" to him.

Feeling the need for some serious changes in my life, I start shaking things up.

It wasn't part of my plan to kiss Levi, but one kiss could never be enough. When that kiss turns into a relationship and I find out that Levi's been keeping a secret, I begin to question if our love affair was too good to be true.

Looks like we're about to find out if we can truly build flawless foundations for the rest of our lives. After all 425 Madison is the perfect place to fall in love.

"Em, is there anything at Envirogal open? I don't know, maybe in research and development?

Or even the finance department? Maybe it's time to put my degrees to use?"

She pops out her bottom lip. "I really don't think we have any openings that would fit what you're looking for or would enjoy. But I will definitely talk to HR on Monday." I deflate a little at her response. Damn it. She was a great resource in the field I would want to work in since I clearly have to work.

"Oh, you should talk to Levi. King Cos is always hiring. They are just so much bigger than Envirogal. I'm sure he'd be able to find you a great job!" She's all excited about the prospect, she's also completely unaware of my distaste for her brother, Levi King.

Well, if she is aware, she does a great job of ignoring it. Just the thought of her tall, slender, dark-haired, brown-eyed brother makes me twitchy. Then, of course, my next thought goes to the fact that he now lives just down the hall. Which means at any time, he could just show up. Don't get me wrong, I'm happy that Emmy's relationship with her brother is stronger than ever. She deserves it since she has some of the worst parents, but I was as happy as a clam not seeing Levi on a regular basis.

I've known Levi King since I was a freckle-faced, braces-wearing preteen. We've always gotten along but were never friends. With him being two years older than us and seeing him being a nice big brother to Emmy, instead of an asshole like a lot of the other brothers in our social circle, I had it bad. My crush on him grew pretty quickly way back then. Unfortunately for me, that crush never really faded, but instead grew as the years went by. That is, until college.

It all ended one night in my Sophomore year. Emmy and I visited him at Harvard one weekend. He was a senior and surprisingly welcomed a visit from his sister. He took us out with a few of his friends to their local hang out and, well, let's just say I had a lot to drink. I decided with my liquid courage that I'd flirt a little. He flirted back, to my surprise and extreme excitement. Toward the end of the night, I thought I was actually getting somewhere. So, when I finally kissed him, I was in heaven. Until he pushed me away and told me I was drunk, and he'd never take advantage of a woman under the influence. Okay, so I can commend that. But drunk me just kept pushing until he delivered his final blow. "Becca, you're like a sister to me, nothing can ever happen between us."

Ouch. You know what's worse than being friend-zoned? Sister-zoned.

Only on Amazon + Read for FREE on Kindle Unlimited
Amazon ➝ https://amzn.to/2Q6ZwZU 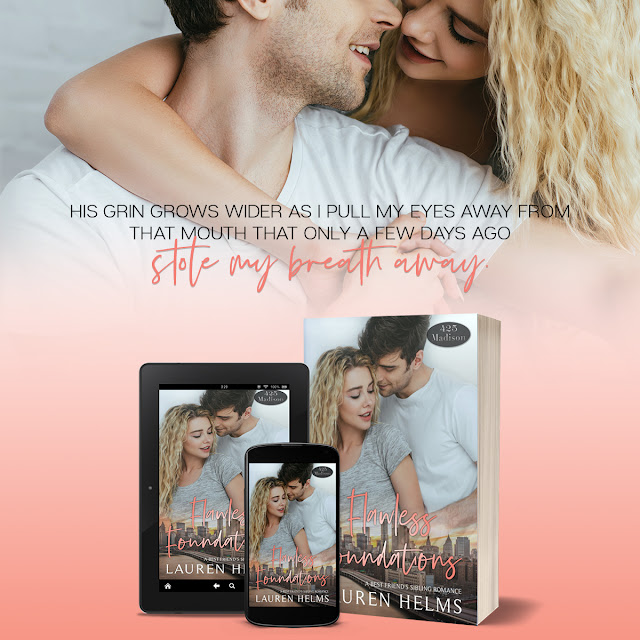 What happens when you have loved someone all of your life and he's only looked at you as his sisters best friend? You move on, but there is always that little part of your heart that is saved just for him. What happens when he finally notices you, and you share a kiss? Do you throw caution to the wind and follow your heart or do you run away with your tail between your legs because you think it meant nothing?

I always find these types of stories fun to read because you just never know what obstacles will be in the way and how things will play out. For Levi and Becca the road was a little less bumpy then others but their relationship wasn't built on a flawless foundation so there were some bumps in the road.

This was a fun and sexy read that had me so engrossed I finished it in one afternoon. This was a great addition to the 425 Madison series of standalone books, which I have been really enjoying. You do not have to read the books in order of release you can pick them up anywhere and dive right in, 425 Madison is a luxury building in New York City and this series is based on the occupants, from the maintenance man to the owner of the penthouse, there is a story for everyone. 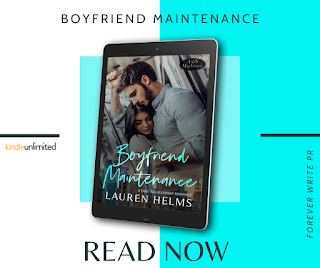 Boyfriend Maintenance by Lauren Helms from the first season of 425 Madison Ave.

“Boyfriend Maintenance is a charming little faux romance story that comes brimming with loads of emotion and steam. This unlikely pairing strike up a deal that leads them in a direction neither saw coming, and boy was it fun to watch them try and resist the sparks, and unexpected chemistry.” —RedsRomanceReviews on Boyfriend Maintenance


Only on Amazon + Read for FREE on Kindle Unlimited
Amazon ➝ https://amzn.to/33kaGQx


Lauren Helms has forever been an avid reader from the beginning. After starting a book review website, that catapulted her fully into the book world, she knew that something was missing. Lauren decided to take the plunge and write her first novel. While working for a video game strategy guide publisher, she decided to mix what she knew best--video games and romance. She decided to take the plunge and joined NaNoWrimo and a month later, she had her first draft.

Lauren Helms has forever been an avid reader from the beginning. After starting a book review website, that catapulted her fully into the book world, she knew that something was missing. Lauren decided to take the plunge and write her first novel. While working for a video game strategy guide publisher, she decided to mix what she knew best--video games and romance. She decided to take the plunge and joined NaNoWrimo and a month later, she had her first draft.


About the 425 Madison Series

Welcome to 425 Madison Ave the perfect place to fall in love. Nine delicious romances set in fast-paced & sexy NYC just waiting for you to read.

This season will feature some new authors as well as some of season one's favs. Back for season two is Allie York, Leigh Lennon, MK Moore, Aubree Valentine, Lauren Helms, and Katy Ames. Plus a warm welcome to KC Enders, Jennifer Rebecca, and Marcie Shumway!

Not only do we have a sexy mix of new and returning authors, prepare for pages packed with new romances, characters, and tropes all from the same well-loved high-rise apartment building in NYC.

Make sure to follow the 425 Madison Avenue Facebook page for more on release dates, cover reveals and author spotlights. For exclusive excerpts, giveaways, and news subscribe to our 425 Madison newsletter!

Check out the Season One and get caught up today! You can read all nine books for FREE with Kindle Unlimited ➝ https://amzn.to/2TR82Pn

This series and all promotional events are brought to you by Forever Write PR - Forever your source for all your writing needs. https://www.facebook.com/ForeverWritePR/ 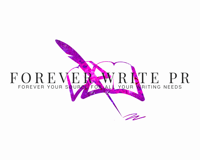