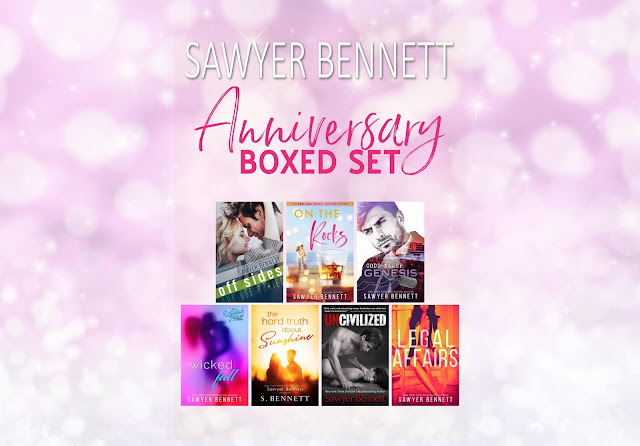 Celebrate SEVEN years of publishing with this Sawyer Bennett Anniversary Boxed Set! Known for her hot heroes, strong heroines, and ability to capture the hearts of her readers no matter the trope, Sawyer Bennett is offering this boxed set featuring seven of the titles that have made her one of the bestselling authors in romance.

Off Sides – He’s the privileged son of a U.S. Congressman. She’s struggling to make her own way, working two jobs and attending college part-time. Off Sides is an opposites attract, new adult standalone.

On the Rocks – He’s a former professional surfer who has returned home to open The Last Call, a beach bar nestled among the dunes of the Outer Banks. She drunkenly threw herself at him five years ago, but as his little sister’s best friend, he knew he couldn’t go there. On the Rocks is a second chance, friends-to-lovers, standalone contemporary romance.

Wicked Fall – He’s the hot-as-hell, millionaire who owns The Wicked Horse. She foolishly offered up her virginity to him years ago, only to be turned down flat. Wicked Fall is a HOT, second chance, standalone contemporary romance.

Code Name: Genesis – Years ago they were in love, but a string of lies and deceit destroyed what they had. Now she’s a superstar with a dangerous stalker, and he owns a nationally renowned protective services company. Code Name: Genesis is a second chance, romantic suspense standalone.

Uncivilized – Savage man, loner, warrior…he has lived amidst the untamed wild of the rainforest since he was a child. She is an anthropologist hired to help him transition back into modern society. Uncivilized is a modern Tarzan style contemporary romance standalone. 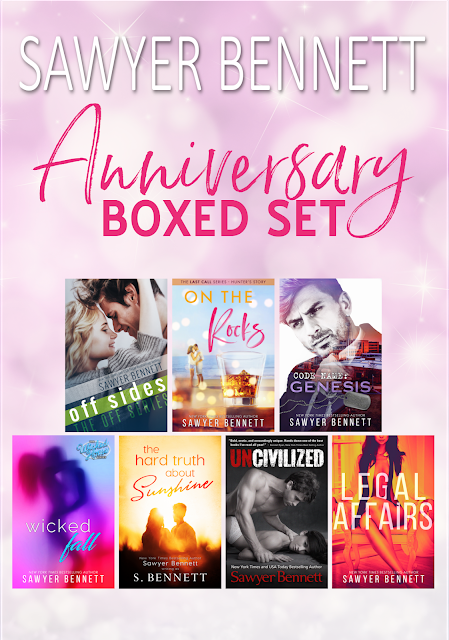 Since the release of her debut contemporary romance novel, Off Sides, in January 2013, Sawyer Bennett has released multiple
books, many of which have appeared on the New York Times, USA Today and Wall Street Journal bestseller lists.

Sawyer likes her Bloody Marys strong, her martinis dirty, and her heroes a combination of the two. When not bringing
fictional romance to life, Sawyer is a chauffeur, stylist, chef, maid, and personal assistant to a very active daughter, as well as full-time servant to her adorably naughty dogs. She believes in the good of others, and that a bad day can be cured with a great work-out, cake, or even better, both.