Obsession of the Egoist by Nero Seal 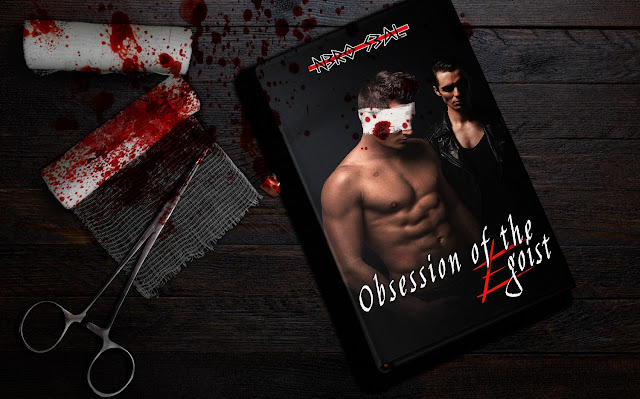 Title: Obsession of the Egoist 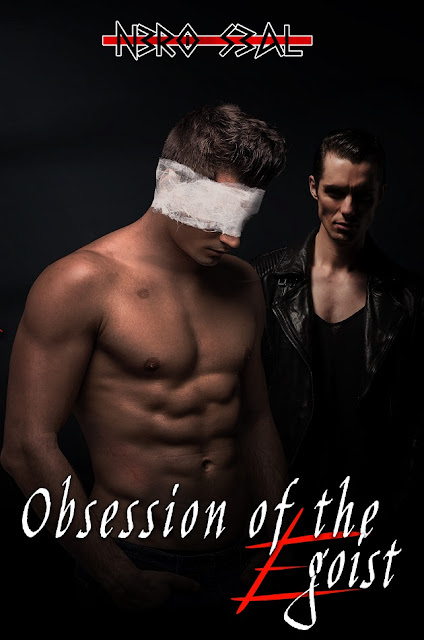 APATHY. DEPRESSION. EMOTIONAL NUMBNESS.
Thrown out of captivity and into long-awaited freedom, Kuon is in limbo, left with the ashes of the future Yugo destroyed.
Unable to cope with the shards of his former life, he enlists to serve in Afghanistan. Two years later, back in Vienna, he’s once again stuck in nothingness, except instead of the white room, he is trapped inside his damaged body.

ICE. BLOOD. FROZEN PIER.
Made Yugo seethe with a thirst for vengeance he can never quench. If punishing Mio left him bitter, giving up Kuon wrenched his soul. Determined to let the past go, he concentrates on his future. Until their paths cross again.
Damaged. Aggressive. Hurt. Kuon still attracts him. Haunted by the memories, Yugo wavers. But when another man takes Kuon’s hand, Yugo decides to take back what belongs to him. 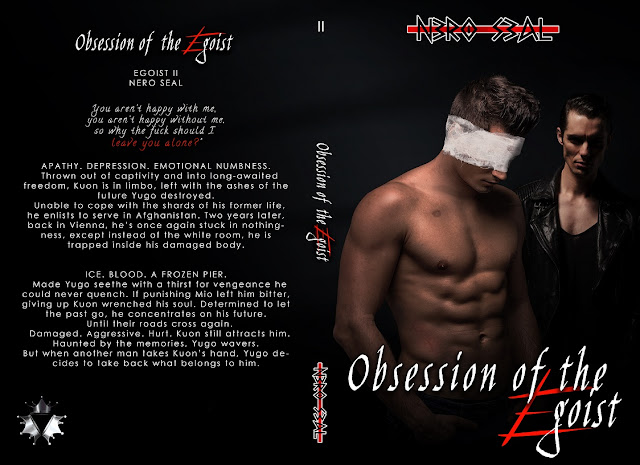 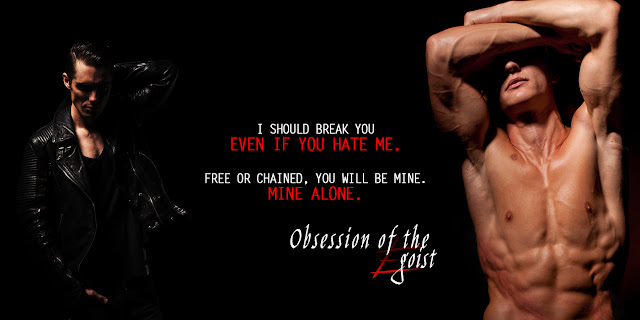 “How the fuck did you get in?”
Step by step, Yugo retreated under the inexhaustible volley of short jabs, until his shoulderblades bumped against the wall.
“Would you stop?” he groaned, losing his patience. He ducked under Kuon’s arm, and spinning the younger man around, shoved his back to the wall. Fingers clasping around the wrists, he pinned them above Kuon’s head. His knee spread Kuon’s thighs as he pressed himself against his chest to prevent any attempts at resistance.
His heart drummed, matching the fast pulse on Kuon’s throat. The heat Kuon’s solid frame exuded seared Yugo’s skin. The proximity messed with his head. He ogled the body in front of him, drinking in the trickles of sweat that skidded down the sides of Kuon’s throat. His harsh, heavy breathing rocketed back and forth from his gaping mouth.
This is a bad idea… Yugo thought, wanting to taste the saltiness of Kuon’s upper lip. He wondered if Kuon’s kisses were the same as he remembered, rough yet questioning, uncertain. This is such a bad idea.
Despite the thought, he leaned forward and sealed the angry mouth with a kiss.
A surprised gasp accompanied the raged grimace as sharp teeth sunk into Yugo’s bottom lip. Despite the pain, Yugo leaned into the kiss. Sinking his fingers into the tender places of Kuon’s inner wrists, he listened for the maddening thuds of his pulse. His bottom lip broke under Kuon’s teeth, and blood trickled down his chin. Swallowing the metallic taste, he made a timid attempt to deepen the kiss. Sharp, angry huffs tickled his tongue. Kuon’s body jerked once, then again, and a shudder ran through his body, changing the dynamic. With the same passion Kuon had attacked a moment ago, he kissed him back.
A bloody tongue ran over Yugo’s bottom lip; Kuon leaned forward, freeing his hands. Teeth clashing, he yanked Yugo’s jacket off.
Light and darkness shuffling suffused everything with a haze of lust. Yugo sunk his palms under the waistband of Kuon’s shorts, found the smooth, hard globes of his ass. Licking and nibbling at Kuon’s lips, he peeled the shorts down along with the underwear at the same moment as Kuon’s fingers tangled in the front of his shirt. Something hard poked his groin, and Yugo smiled against the kiss.
In the silence filled with panting, Yugo tore the belt out of the loops, unzipped his pants, and freed his heavy dick. His length brushed against Kuon’s slick with precum cock. Grabbing Kuon’s hand, he wrapped the blind fingers around their dripping desires. Kuon shuddered, and his slack mouth skidded against Yugo’s cheek.
“No cumming yet,” Yugo warned.
Imprinting Kuon into his skin, he sunk his teeth into the sweat-drenching neck as his fingers slipped into the crack and found Kuon’s entrance. With the small, circling motions, he probed the softness of Kuon’s anus. His other hand slid down Kuon’s thigh toward the knee, before Yugo yanked it up and wrapped it around his hip.
“Hold onto me,” he breathed into Kuon’s neck.
Dry and hot, Kuon’s entrance resisted the intrusion. Tearing his fingers away from Kuon’s ass, Yugo licked them wet, before shoving them back into the crack. His head, toes, and fingertips buzzed, as all the blood he possessed concentrated in his groin. The first knuckle thrust its way through the tight ring of Kuon’s inner muscles, making the younger man hiss and bite his own lip.
“Shit. So fucking tight…” Yugo hissed. “I won’t be able to enter like this. Relax.”
Kuon shook his head, blood beading around his canine tooth. “Can’t…”
Yugo gave up. With a flat lick, he collected the ruby drops of Kuon’s blood, as his fingers dug deeper into the passage, searching for the prostate. The heat and pulsing of Kuon’s insides messed with his self-control, making his every muscle tremble with urgency. Kuon’s wet t-shirt impeded his probing. Yanking it up with his free hand, he brought the hem to Kuon’s mouth.
“Bite.” Kuon did. Yugo wrapped his hand around Kuon’s palm. The precum coated his fingers, he increased the rhythm. His thoughts messy, he leaned upon Kuon, imprinting the younger man into the wall. His hips moved in the torn music of their disjointed panting, and soon enough, soft, suppressed groans filled his ears.
“That’s it…” Yugo whispered. “Cum for me.”
Kuon’s fingers sunk under his shirt and clawed at his flank, as he shuddered, teeth unclenched, releasing the hem of the t-shirt. The blindfolded head fell backward, revealing the perfect line of his jaw. Without thinking, Yugo sunk his teeth into the side of Kuon’s face as a violent discharge shot through his body. 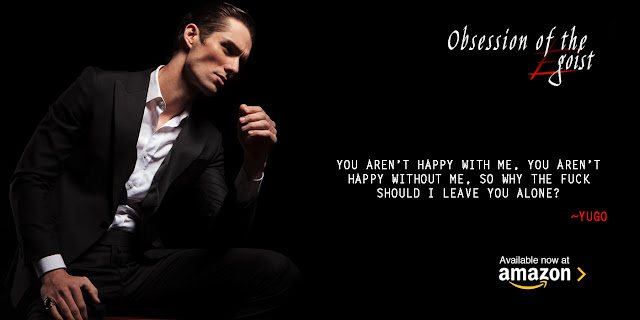 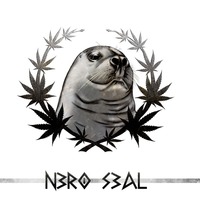 Journalist, poker player, casino events manager, designer, and SEO specialist, Nero Seal tried it all before committing to the idea of being an M/M fiction writer. Living in one of the most homophobic countries in the world, he has a lot to say. Being an avid traveler, he creates his imaginary worlds from the places he’s been and the people he’s met.
Characters are always talking in his head, forcing him to write their stories, using his 49 kinks as the ultimate weapon of alluring. When the voices in his head aren’t slaving him around, he is drawing, hiking, and procrastinating important things in favor of momentary gratification.