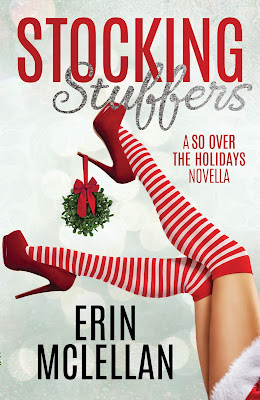 Series: So Over the Holidays #1

Order now: https://amzn.to/2qQ3igC
Note: Commissions may be earned from the links above.


Book blurb:
Sasha Holiday is so over the holidays after getting left at the altar last Christmas Eve. But as the marketing maven for Lady Robin’s Intimate Implements, she’s stuck not-so-merrily pitching naughty toys at a romance book club’s Christmas party. Her loathing of the yuletide only intensifies as a snowstorm rolls in and traps her at the Winterberry Inn. Stranded with her is Perry Winters—a hot bearded book club member trimmed in flannel and tattoos.
Perry’s a romantic with an unerring belief in the magic of the season, and he recognizes a Christmas miracle when he sees it. Brave, smart, and confident—Sasha Holiday is a gift. And the gifts keep coming when she suggests they pass the time with some no-strings fun. After all, she has a big bag of toys that would make even Santa want to stay in bed on Christmas Eve.

But the frisky festivities turn complicated as feelings spark between Sasha and Perry. Perry wants to see Sasha once the snow clears, but Sasha is reluctant to take the relationship sleigh ride again. Perry will have to show her that love is more than just a holiday feeling. 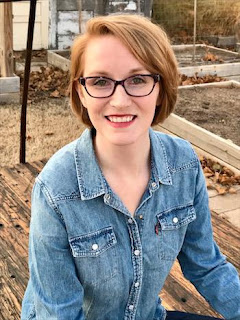 Erin McLellan is the author of several contemporary romances, all of which have characters who are complex, goodhearted, and a little quirky. She likes her stories to have a sexy spark and a happily ever after. Originally from Oklahoma, she currently lives in Alaska and spends her time dreaming up love stories set in the Great Plains. She is a lover of chocolate, college sports, antiquing, Dr Pepper, and binge-worthy TV shows. Erin is a member of Romance Writers of America and its Alaska chapter.

I love my Romances with lots of spice this story had TONS of spice with very little romance, but for me it worked. Sasha or as I like to refer to her Ms. Scrooge really dislikes Christmas, I mean she hates it so when she has to work a sex toy party right before the holiday she dreads it but she is willing to play up the stocking stuffers gimmick to gain a few extra sales but she can't seem to get the party ended quick enough.

Then in walks Perry, the hostesses brother, and there is an instant connection between the two of them. There is a snowstorm of epic proportions heading their way but hits sooner than expected and Sasha is now stranded at Winterbury Inn with Perry to keep her company and her bag of toys....
“It could be the twelve days of Christmas sex toys. A new gizmo every day.”
And...this is where things get interesting. Perry is not the type of guy to have a one-night-stand but Sasha intrigues him and she is only interested in having fun so they break into her bag of tricks and the party really begins.


The Fancy Fleshstroker and her black silky thong were on top of an antique dresser, and they stood out among the twee decorations, glaring in their filthiness.
Perry’s mouth landed on the edge of her jaw, and she tipped her head back, gasping.
“We need my roller bag.”
“The one full of Christmas miracles?” he asked, smiling against her neck.
“That’s the ticket.”
“I’ll get it.” He jumped up off the bed and jogged into the adjoining bathroom and, she assumed, into the Blue Spruce Room. He came back seconds later with her Lady Robin’s roller bag in hand, a huge grin on his face.
Her heart tumbled over, like a snowball falling down a hill, gaining momentum, faster and faster. Hopefully, it wouldn’t hit the bottom and explode into nothing but powder. “I’m leaving tomorrow.”
His smile faltered for half a second, then he shrugged. “I know.”
“And you’re okay with that?”
She wasn’t sure she could say the words outright, couldn’t ask him if he was okay sleeping with her for one last night when it wouldn’t lead to anything. But how ridiculous was she? If she couldn’t hear the words out loud, then she shouldn’t be living by that philosophy.
She took a deep breath. “Are you okay with one more night of no-strings-attached sex?”
His lips quirked. “On the second day of Christmas my fuck buddy gave to me?” he said, his voice musical but gruff.
“The screw of your life, baby. Get over here.” 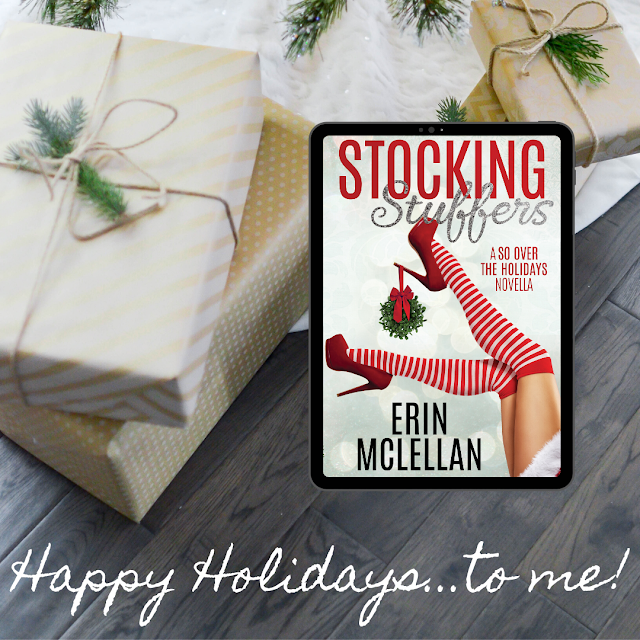 EM: There were three aspects of this book that I had to do quite a bit of research for. The first is the heroine’s VW Bug. I looked up specs and information on driving Bugs in bad weather. I got a few things wrong initially, but luckily, my editor has owned a VW Bug and was able to set me straight. I also had to research gardens and landscaping for this book. The hero wants to be a landscape architect. Lastly, I had to do a lot of sex toy research. Mainly, I needed to come up with unique names for the sex toys my heroine sells, which meant searching vendors to ensure the names weren’t super common.

Do you write listening to music? If so, what music inspired or accompanied this current book?

EM: I don’t often listen to music while writing unless I’m having trouble getting into a certain writing mood. If I need to write a sad scene but can’t get in the right headspace, I’ll listen to sad music. Stocking Stuffers is kind of an odd case. I wrote a lot of this book during the summer and fall last year. It was hard to feel Christmassy in the middle of June. This is also a sexy book. Basically, I went on the search for the sexiest Christmas music I could find and listened to that.

What do you like to do when you are not writing?

EM: Normally, when I’m not writing, I’m reading or watching TV, which doesn’t make me sound very exciting. But I also love to hike and camp, and since moving to Alaska, I’ve learned to downhill ski, which is a lot of fun. Other hobbies include sewing, antiquing, and gardening.