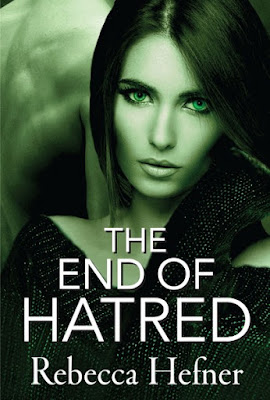 The
End of Hatred
Etherya's
Earth Book 1
by
Rebecca Hefner

These
are dangerous times on Etherya’s Earth…

Slayer Princess
Miranda, heir to the throne, has hated the Vampyres for a thousand
years. Since the Awakening, she's fought to protect her people,
choosing to be a warrior more than a royal. When a female Vampyre
washes up on the shore of her compound’s riverbank, she seizes the
moment to take the offensive.

Sathan, King of the Vampyres,
distraught at his sister’s disappearance and captivity, agrees to
travel with Miranda to resect the Blade of Pestilence, also hoping to
change his people’s state of endless war. Although the woman hates
him due to the constant raids on her compound for the Slayers’
life-giving blood, he can’t help but admire the stubborn and strong
princess.

As their journey progresses, both begin to
understand that they are aligned in their hatred of Crimeous, leader
of the Deamons, as well as their hope for peace between the Slayers
and Vampyres. Determined to fight their growing attraction, they
forge a tentative truce. But old wounds run deep and trust is scarce.
Their faith in each other must remain strong or all will be lost…


**The
Etherya's Earth series is best read in order, so that the reader can
enjoy the evolution of the characters. After all, the author loves a
good twist and wants the reader to uncover them organically. However,
readers of romance rest assured that each book has its own featured
hero/heroine and HEA. 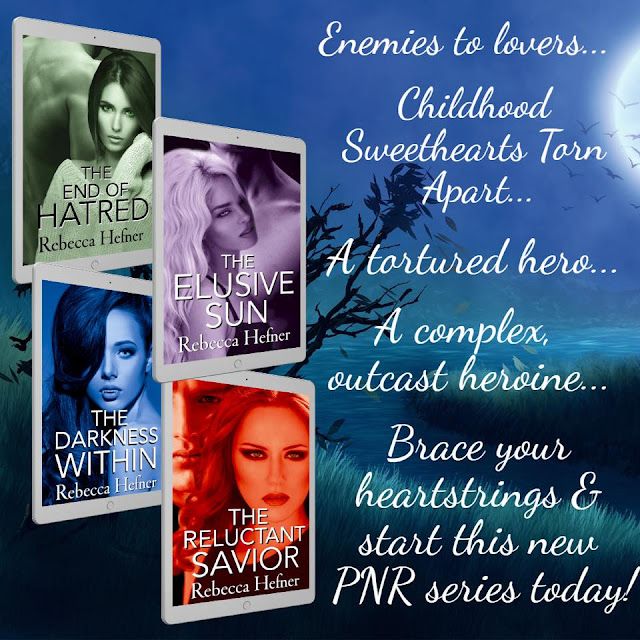 Where do I even start! This book sucked me into the world of Vampyres, Slayers, and Deamons and I kid you not when I say I couldn't put this book down. I grabbed this book when it was on sale on Amazon and I had it on my kindle for a few months before I finally got to it but once I did I devoured it, if I didn't start it so late in the day I would have finished it in one day, but sleep unfortunately did win out.

Miranda is the perfect Princess for her people, she has their best interest in her heart and she will do anything to make their survival her top priority. She proves this when Arderin,the Vampyre Princess washes up on her riverbank. Miranda goes to Sathan, King of the Vampyres, and proposes a deal...one he cannot refuse. But what neither of them expected was that on this journey they were about to embark on they would fall for one another.

The chemistry was amazing but what was even better was the whole world set up, it was so well thought out and the way everyone played a role in the others lives. It was truly a remarkable read. I have all the books in the series on my TBR list and the next book is on my kindle waiting for the right moment for me to get lost in their world again.

I highly recommend this series to anyone that enjoys paranormal romance or any kind. 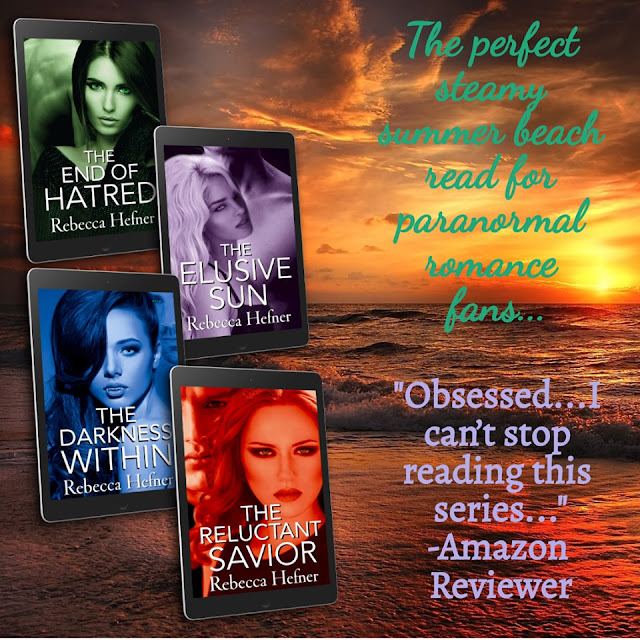 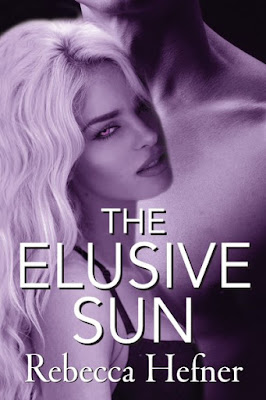 Lila,
a high-born aristocrat of the Vampyre kingdom, was betrothed to
Sathan, King of the Vampyres, for a thousand years. The betrothal,
declared by the goddess Etherya, was deemed unbreakable. Although she
cared for Sathan, and loved him as her king, secretly her heart
yearned for his brother. When Sathan falls for another, Lila ends the
betrothal, terrified at what her life will become now that she won’t
be queen.

Latimus has loved Lila since they played together on
the grassy riverbank as children. Knowing that his brother was the
better man, he never begrudged his betrothal to the woman he secretly
loved. Now that Sathan has married another, Latimus becomes aware of
Lila’s feelings. Determined to push her into the arms of a worthier
man, he believes that a war-torn army commander such as he could
never offer her the life she deserves.

As the war against the
Deamons rages, Latimus fights for his people, protecting them against
the evil Dark Lord Crimeous. When Lila suffers a brutal attack,
Latimus is shaken to his core. Determined to avenge her, he
acknowledges the emotion that has always burned for her in his
blackened heart. But Lila has moved on and as the war ensues he
worries that it might be too late to claim her... 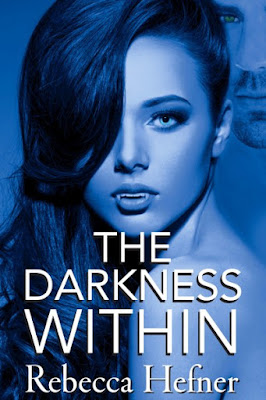 The
Darkness Within
Etherya's
Earth Book 3

Arderin,
princess of the illustrious Vampyre kingdom, has always marched to
the beat of her own drum. Motivated by a calling to heal others,
frustration consumes her since her brother, King Sathan, doesn’t
understand her desire to study medicine in the human world. Moreover,
the son of the Dark Lord Crimeous has moved onto their compound and
he seems obsessed with driving her absolutely insane. Hating him for
his sharp tongue and dark nature, she tries to squelch her unwelcome
attraction to him.

Darkrip has been enthralled by Arderin
since the night he knocked her unconscious and sent her down the
river, prompting the end of the War of the Species. Never has he met
a woman more beautiful and passionate. Frustrated by her dramatics
and consumed by his desire for her, he vows to stay away. For the son
of Crimeous, with his malevolent blood, could never have children or
a normal life.

When Crimeous threatens both their lives,
forcing them into a shared captivity, they do everything they can to
escape and survive. As their connection grows, so does their
attraction. Knowing they have no future together, and the
consequences of furthering their relationship would be disastrous,
they forge ahead in the conflict against the Dark Lord. But the
Universe is fickle and can muddle with even the best laid intentions… 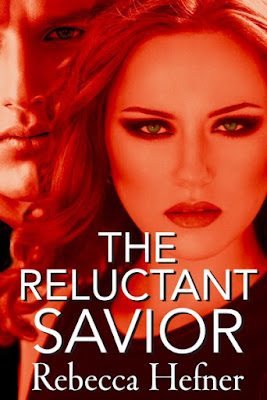 Evie,
daughter of virtuous Princess Rina and malicious Deamon King
Crimeous, is a woman torn in half. The first centuries of her life
taught her fervent lessons about pain and suffering. For ages, she
suppressed her mother’s noble blood, crafting a reality where she
was drifting alone, needing no one. Until an ancient prophecy calls
to her, possibly creating a purpose for her squalid
existence.

Kenden has commanded the Slayer army for a thousand
years. Strong, cunning and loyal, he longs for the day when Crimeous
has been defeated and he can settle down to build a family. Focused
on conquering the Dark Lord, he is stunned when Evie makes a brazen
demand that must be fulfilled before she chooses to fight with
them.

Although incensed by Evie’s ultimatum, Kenden has
never desired a woman more than the flame-haired vixen. Though she
stirs his ire, he also has a deep well of compassion for the beauty
who suffered so much trauma centuries ago. Together they train and by
night their connection grows, building toward the moment when they
will battle her father. But, in the end, Evie has a choice and
struggles to espouse righteousness over malevolence. For when one’s
worst fears are exposed, the evil is so much easier to embrace… 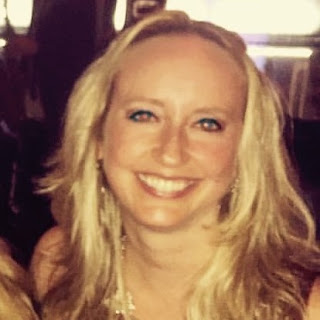 Rebecca Hefner grew up in Western NC and now calls the Hudson River of NYC home. In her youth she would sneak into her mother's bedroom and raid the bookshelf, falling in love with the stories of Judith McNaught, Sandra Brown and Nora Roberts. Years later that love of a good romance, with lots of great characters and conflicts, has extended to her other favorite authors such as JR Ward and Lisa Kleypas. Also a huge Game of Thrones and Star Wars fan, she loves an epic fantasy and
a surprise twist (Luke, he IS your father). One day, over a decade ago, she began writing her own stories and recently mustered the courage to leave her corporate medical device sales job and become a full-time author.

Follow
the tour HERE
for exclusive excerpts, guest posts and a giveaway! 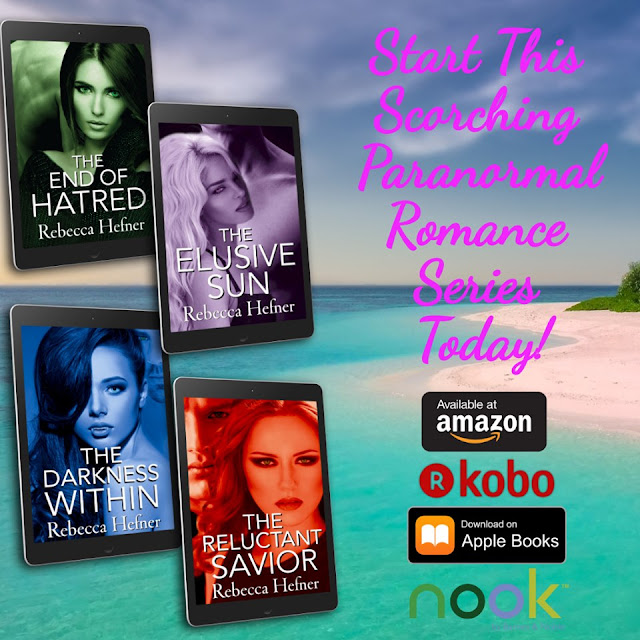