RELEASE TOUR for Accidentally In Love by Katy Ames

Arya Winters’ dream job can make you blush, but her life isn’t nearly as exciting as being the voice of your favorite romance audiobooks. For Gavin McCord, it’s all about getting the job done as quick as possible, but suddenly he can’t stop fantasizing about a woman I’ll never meet. The eighth book in the addicting 425 Madison Avenue, is now live. Read Accidentally in Love by Katy Ames today!

Only on Amazon + Read for FREE on Kindle Unlimited 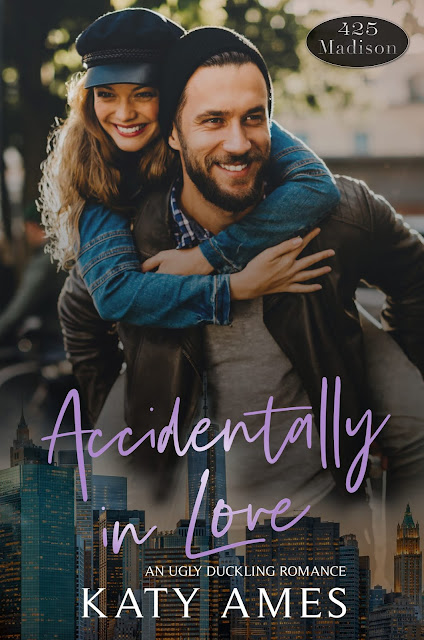 About Accidentally in Love

I know I can make you blush.
It’s a weird claim to fame, but a perk of my dream job: being the voice of your favorite romance audio books. Laughter, hijinks, adventure. Passion. Sweet heaven, the passion. It’s everything I could ever want. Except…
The problem with this fabulous life?
It’s all just fantasy.

Picking between Chinese and Thai delivery doesn’t count as adventure.
The bestie who always makes me laugh is thousands of miles away.
As for the hunky hero? It’s not like he’s just going to come crashing into my apartment.

Until the night a bearded stranger does exactly that…

Do the job. Get the bad guy. Go home.
Most importantly, don’t get involved.
Those are the rules. The agency’s and mine. And they work. Even better, they give me the perfect excuse to keep my distance.
The perfect escape from getting burned again. Except…

Why can’t I stop watching her?
I shouldn’t care more about what she’s doing than my target.
I shouldn’t let her distract me from the job.
And I sure as hell shouldn’t fantasize about a woman I’ll never meet.

That is, until the night I surprise us both by kicking down her apartment door. Rules or no rules, it's true that...

After all, 425 Madison is the perfect place to fall in love.

Each story in the series is completely standalone.

This book was a fun, hot, cute, quick read for me. I loved the way Gavin and Arya met it was so unexpected but so perfect I couldn't have pictured it happening any other way.
Gavin is an FBI Treasury agent that is currently on a stakeout looking into one of the residents of 425 Madison. Who knew that such things happened in a building that is the perfect place to fall in love?   Arya is a voice narrator for Romance audiobooks, who absolutely loves her job and moved across the country to accept the position she was offered just three months earlier. Both of them are sort of loners with not many friends but when they meet there is an instant connection. Arya isn't going to let Gavin get away no matter how hard he tries and I have to say her spunky attitude was so much fun.

This story is the eighth book in the 425 Madison Series but can definitely be read as a standalone. Each of the books in the series have their own HEA so they can be read in any order, if you haven't read one yet now is the perfect time to start. 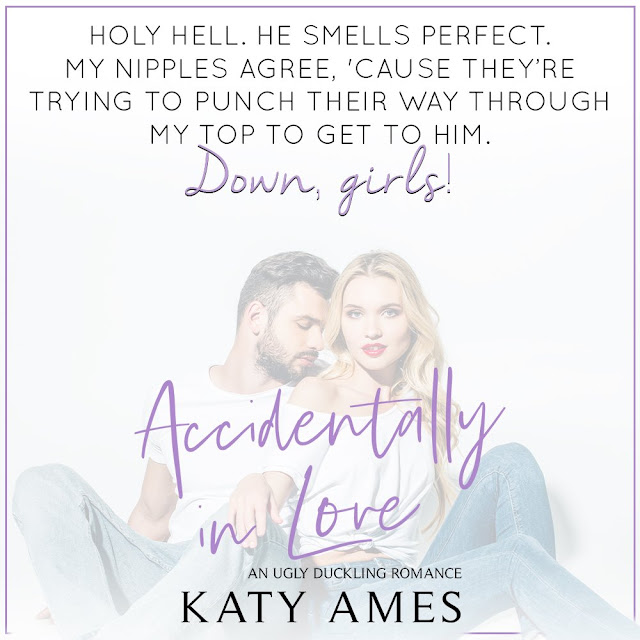 
“Number one rule of tailing someone: don’t breathe so loud they can hear you five flights away.”
“Hey!” I say, thwacking his chest. “Don’t be a jerk. Besides, I don’t think you’re in the position to give spy tips right now.”
One bold eyebrow lifts in question.
Pushing out of his grasp, I whip the hat off my head, breathing in relief as cool air hits my skull. “Isn’t the number one rule of spying not to pick up a tail in the first place?”
The first eyebrow drops, followed by the other. Green eyes turn sharp, primitive, before brightening. A roar of laughter erupts from his chest. We stand there for who knows how long, me huffing and puffing, and Gavin laughing like I’ve just delivered the funniest one-liner he’s ever heard. When he stops, his chest is heaving as hard as mine. One last chuckle escapes when he clocks my annoyed expression.
“Oh, come on. You should be proud. It’s been forever since I laughed that hard. That alone should make up for giving yourself away. Besides, it was a good effort. For a first timer.”
“Ugh,” is the only answer that seems fitting. “When did you realize I was there?”
“Hmm,” he says, stroking his beard, his lips still twisted in a smirk. “Down in the alley. When you scraped that thing against the wall.” He points at the metal tip on the large umbrella.
“You heard that?”
“Hmm,” he repeats, head bobbing. “That and a lot more.” Gavin sweeps his eyes down my body, lingering on my boots before pivoting and heading down the hall.
“Wait, what else?” Keeping up is impossible, what with my thigh muscles screaming and pain scorching my foot. He slows his pace without glancing back, his strides shortening until I catch up.
Another step and another wince, and Gavin mutters something under his breath before lifting me off my feet. My own smirk turns to a shriek when he throws me over his shoulder and swats my butt before continuing down the hall.
“That was completely unnecessary.” My complaint lacks edge, which I blame on the view of his very fine ass.
“Quite the opposite, Ms. Winters. Consider it punishment for ignoring my warnings about staying away.” 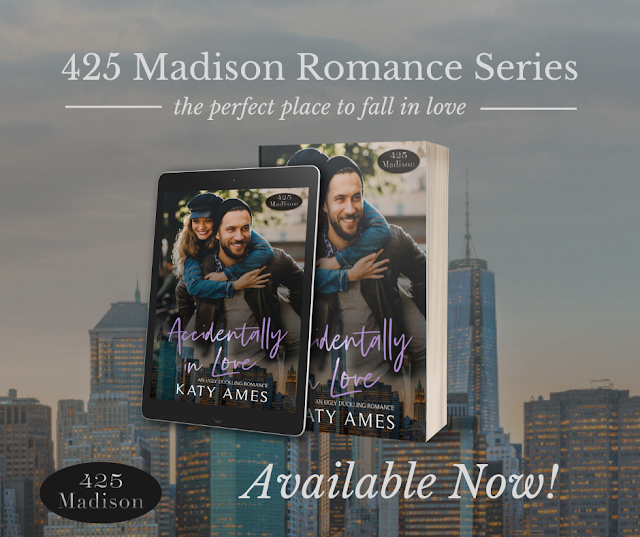 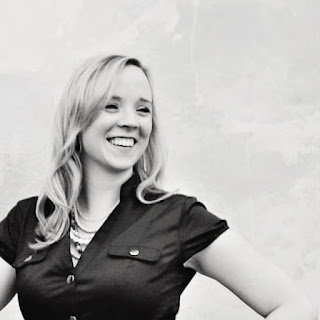 Katy Ames has spent most of her life on the East Coast and hopes to spend more of it in the UK, primarily so she can indulge in her serious plaid obsession. There isn’t a teenage drama or a period British TV show she hasn’t binge-watched at least twice. And she can be persuaded to do almost anything with the promise of bourbon, chocolate, or a nap (not necessarily in that order).

Katy is mom to a small human who has an obscene amount of energy and a blissful ability to ignore swear words, and wife to a man whose reading habits are far too serious. Katy and her family reside in Washington, D.C., a city she where never intended to live and loves so much she’d be happy to talk about it for hours. Just ask.

About the 425 Madison Series 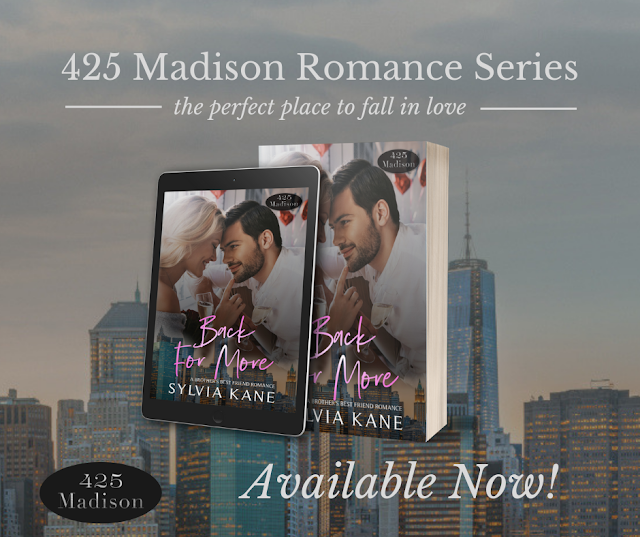 Welcome to 425 Madison Ave the perfect place to fall in love. Nine delicious romances set in fast-paced and sexy NYC just waiting for you to read.

Join these authors as they come together, each with a standalone romance for you to enjoy.

Featuring some of readers' favorite tropes: second-chance romance, best friends sibling romance to a good ol' enemies to lovers romance. We've got you covered with a sports romance, a fake relationship and even an ugly duckling or two. Don't forget a brother's best friend and falling for your soul mate. Maybe a little love triangle as well. Each tale offers you something new, something different. After all, 425 Madison Avenue.

Did you miss the first seven books in the series? You can read them here:


The final book in the series is coming soon! Add it to your Goodreads shelf today!

Sightseeing in Manhattan by C. Lesbirel
A Soul MateRomance
Release: 7/18/19
Add on Goodreads


This release event is brought to you by Forever Write PR -
Forever your source for all your writing needs.
https://www.facebook.com/ForeverWritePR/