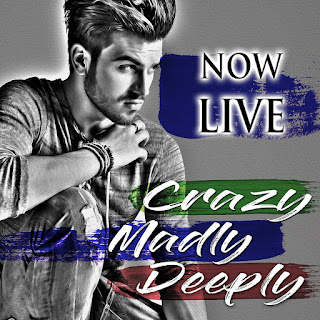 Holden sees things. Lots of things.
Things we would call ugly, but he believes are beautiful.

He paints sad pictures.
And strums lonely guitars.
He drowns out the taunting voices while shunning the expected norms.

I let them hurt him.
I wasn’t strong enough to speak out.
I hurt him, too, only to prove I wasn’t just like him.

But then I saw him.
I heard him.
I learned why Holden wasn’t CRAZY like they said.

I loved him MADLY.
I fell for him DEEPLY.
And alone, I decided to save a man who was the most beautiful of us all.

If you haven't read any of Lily White's books before I highly recommend starting with this one. I was recently turned onto Lily White's books (September 2017) and I must admit that I am a fan, especially of her Dark Romances which is what I have read until this little gem. Crazy Madly Deeply was a gut wrenching read, which totally broke my heart. From the very first page I was pulled in and Holden held my heart until well after I finished the book. This story was so very different from others that I have read by Lily White but honestly I'll take her stories anyway she wants to write them, her brilliance comes through in each and every page.

Holden's love of his sister is evident in everything he does so its not surprising that he will do anything within his power to protect her from the degenerates in their high school, what was surprising to me is the way he was treated by others in the school. I never really understood how someone can come from the "wrong side of town" but I guess growing up in a large city things tend to be a bit different than they are in small towns. Anyway,  Holden quickly became imprinted on my heart and he will be there for a long, long time.


Michaela took a while to grow on me but right away I knew there was more to her than we were being shown. I appreciate the fact that Michaela went through a LOT, and I really mean a LOT of crappy things and I totally understand where her mind was when she was dealing with everything but what really made me truly begin to like her is when she had a choice on how things would proceed and she went with the way that was true for herself and not for others. You may not understand what I mean but once you read this AMAZING book you will.

Crazy Madly Deeply will be a book I recommend to not only other contemporary romance book lovers but also to anyone that is looking for a story that will pull at their heartstrings and leave a lasting impression.

Lily White is a dark writer who likes to dabble on the taboo side of eroticism. She is most known for her Masters Series (Her Master’s Courtesan and Her Master’s Teacher), Target This, Hard Roads, and Asylum. She’s co-authored Serial (a four part serial series). When she isn’t writing as Lily White you can find other books by her under M.S. Willis where she has penned the Control Series, the Estate Series, Because of Ellison (contemporary romance), and Standard Romance Story (Romance Comedy). Lily enjoys stretching her writing muscles by continuing to challenge herself with each book she publishes.
In addition to writing, Lily is an avid reader, gummy bear slayer, and a gold medalist in puppy naps.