Today we are celebrating the cover reveal for FIREBALL by Nazarea Andrews. Fireball is an adult contemporary romance, standalone novel, and it kicks off the brand new River Street Bar series. It will be released on March 8! 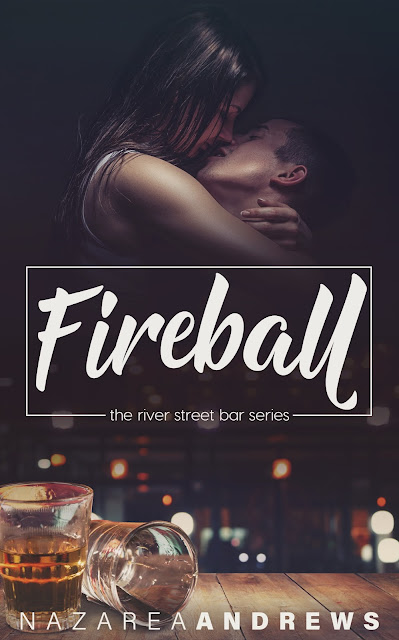 Nazarea is re-launching her READER GROUP.

You can get exclusive news, sneak peeks, and more!

He’s infuriating…
Dempsey Jones has been a nuisance my entire life, the straight-laced Boy Scout grown up to be a firefighter, of all things. He was the one helping kittens out of trees and old ladies cross the road while I was lighting cherry bombs with my best friend in abandoned buildings, and now that we’re all grown up—even if my Dad doesn’t agree—he’s still just as annoying.
She’s impossible…
Taite Ridley has been a constant my whole life, the curly haired mischievous daughter of the police chief, charming and devious and alluring. She was wild in ways I never dared to be and too big for our little town. But she’s here, a small town cop, and I can’t avoid her, even if I wanted to.
And I don’t want to.
It’s like mixing fire and gasoline and when these two collide, someone is gonna get burned… 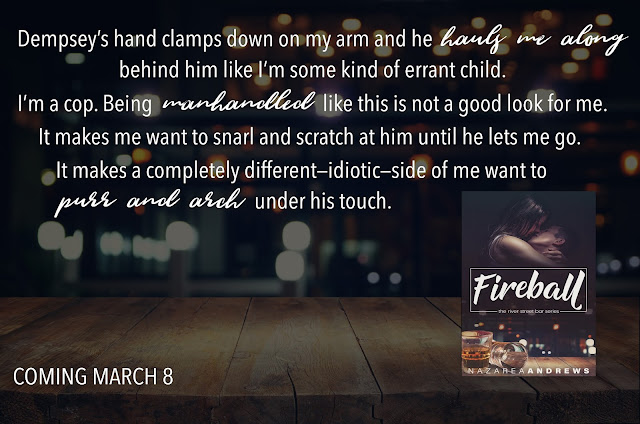 I grew up in River City.
It’s a good place for a kid to grow up—small town enough that I could wander without causing much worry, as long as no one counted my father.
He counted himself, but I stopped a while ago.
But it’s small enough that there’s not enough crime that I couldn’t wander, and big enough that it didn’t bore even me to tears. It was this intoxicatingly perfect mix of small town and big city, where everyone knew everyone and we didn’t have to drive an hour to go to a mall or museum.
And I never wanted to leave it. River City was home. I wandered away for college, and promptly came back, and I loved it—it’s where every good memory I had was, a place I cared about with a ferocity that only a native could. It knew my secrets and my history and it kept both safe.
But right this second, as I stood on Mrs. Rudolph’s front yard in the sideways rain—she was perched on her covered porch with a cup of coffee clasped in her wrinkled hands—I was questioning literally every decision I’d ever made in my life.
“Ma’am, we checked your crawlspace last week.”
“That Harper checked it,” Mrs Rudolph says, dismissive as fuck and I hear a muffled snort behind me. My smile feels brittle as she smiles brightly at me. “But I know you’ll do a good job. You don’t mind, do you, Taite?”
And that’s why.
I love River City with all my heart, but I swear to god, becoming a cop in a city that watched me grow up was probably the worst idea I’d ever had.
And I’d had a long and illustrious career of bad ideas, as Daddy was very helpful to point out.
A choked noise came from behind me and I fixed my plastic smile a little bit wider before saying, “Gimme just one second, Mrs Rudolph, Officer Delgado and I need to talk.”
She nods agreeably and takes a sip of her damnable coffee and I turn to pin my partner with a glare.
Miguel doesn’t even have the good grace to try to hide his smile.
“Don’t look at me like that,” he says, smile wide and cheerful.
“It’s your turn to go crawling under houses.”
“How do you figure that?” he asks, attempting to school his expression.
“I went up the tree for the Foster girls’ kitten last week!”
“Didn’t Dempsey—”
I snarl and he very wisely shuts his mouth. His eyes are still a little too bright, though, and I kinda want to punch him. I do not stomp my foot. “You promised not to bring him up,” I snap.
“I know,” he gives me apologetic eyes. “I slipped, sorry.”
I glance back at the house, at Mrs Rudolph waiting anxiously.
“I have to go, don’t I?” I say, resigned.
Miguel nudges me with one shoulder. “If you don’t, we’ll be here next week. She’s not gonna believe any of us until you tell her there’s nothing down there.”
“But—”
This. This is the problem. I grew up here, the only daughter of the police chief, a fucking widower and somehow became the town mascot. Even when I want to be taken serious, it’s like all anyone sees is the knobby kneed, ratty haired fourteen year old running the streets with Miguel and getting into trouble.
I huff a curse and shrug out of my waterproofed jacket. The rain immediately starts biting into my uniform and I resign myself to spending the rest of my shift wet and muddy.
Maybe Miguel would let us swing by my apartment to change before we headed back to the station.
“I hate this,” I mutter and he nods.
But he doesn’t quite hide his grin as I drop to my knees and crawl under Mrs Rudolph’s damn house.
“I went to school for this. The fucking Academy. So I could crawl around in the mud looking for—fuck. Miguel, what the fuck am I even looking for?” I shout, my voice muffled.

You can get exclusive news, sneak peeks, giveaways, and more! 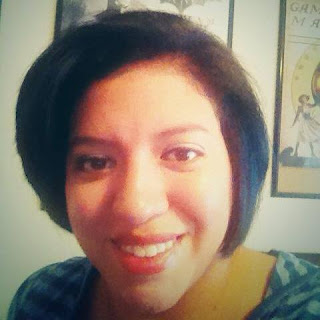 Nazarea Andrews (N to almost everyone) is an avid reader and tends to write the stories she wants to read. Which means she writes everything from zombies and dystopia to contemporary love stories. When not writing, she can most often be found driving her kids to practice and burning dinner while she reads, or binge watching TV shows on Netflix. N loves chocolate, wine, and coffee almost as much as she loves books, but not quite as much as she loves her kids. N is a self-professed geek and enjoys spending her spare time lost in her favorite fandoms and can often be found babbling about them on social media. She lives in south Georgia with her husband, daughters, spoiled cat and overgrown dog. She is the author of World Without End series, Neverland Found, Edge of the Falls, and The University of Branton Series. Stop by her twitter (@NazareaAndrews) and tell her what fantastic book she should read next.