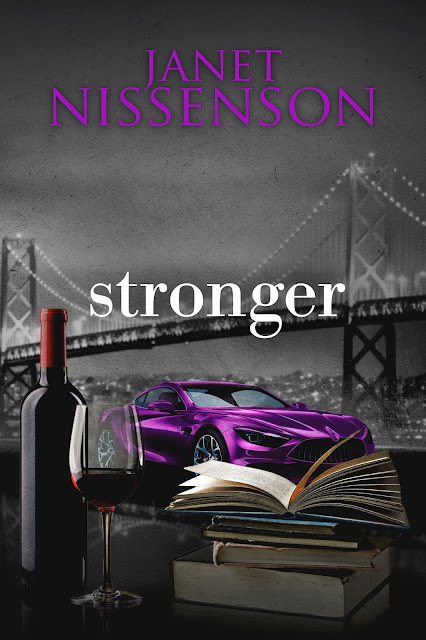 Cara has an admitted problem with hot men, falling so deeply and so quickly under their spell that she loses a little bit of herself with each toxic relationship that always seems to end badly. Every man in her young life thus far has let her down – her high school sweetheart, a college fling, and most of all her self-centered playboy father. She’s determined not to be a sucker for a handsome face and a hard body any longer, and has stuck to her guns for more than two years. And then she meets Dante.

Dante knows he has no business messing with cute little Cara. For one thing she works for his best friend, and more importantly she’s all kinds of wrong for him – too young, too innocent, too kindhearted. And given the mood he’s in these days – after the woman he was ready to propose to chose her career over him - a sweetheart like Cara should be running as fast as she can in the opposite direction.

But the only place Cara wants to run is right into Dante’s arms and stay a good long while. Will he wind up being the one for her – or is she destined yet again for another heartbreak?

This was an enjoyable read but I must admit there were times that I wanted to give Dante a good smack up the side of his head. Seriously why he was still hung up on a shallow egotistical woman? I couldn't for the life of me figure this one out, he was down to earth with a deep love of family and friends and Katie was the total opposite.

I loved Dante and Cara together, and I must admit that the fact that they had to keep their relationship a secret added more layers to their relationship.  Dante was Nicks client and Cara worked for Angela and Nick, which meant she was violating the fraternization policy...oh well! This is a May/December relationship and Dante was occasionally hung up on their age differences but Cara was much more mature than her age so I didn't feel as if there was a great difference in their age at all, and it is only 11 years so it's not terribly drastic.

One thing I love about this series is that each book can be read as a standalone even though previous couples may pop into the story, Nick and Angela's story is one that I haven't read yet but I plan on going back and reading all of the stories I have missed at a later date. I would recommend this book to anyone looking for a story that has many layers to it. This is not a quick read but it will pull you in and you will not want to put it down until the very end, unfortunately that meant I fell asleep for the night while reading...but once I was up I was back at it!

“More pasta?  Or salad?  There’s some of each left.”
Dante groaned, shaking his head and patting his stomach.  “Thanks, but I couldn’t manage another bite right now.  Those cupcakes will need to wait awhile.  Here, I’ll help you clear the table and then we can finish off the wine.  And don’t argue,” he added sternly as she began to protest.  “I might own a dozen cars and live in a penthouse now, but my first job in high school was being a busboy in the family restaurant.  Believe me, I cleared more dirty dishes off the table than you’d ever want to imagine.”
“Okay,” agreed Cara reluctantly.  “Though this isn’t turning out to be much of a thank you dinner, you know.  First you bring wine and flowers and dessert, and now you’re helping to clear the table.”
He leaned over the table and dropped an affectionate kiss on her forehead.  “And I already told you that there’s no need to thank me, honey.  The pleasure of your company is all the thanks I need.”
She beamed at him.  “That’s one of the sweetest things anyone has ever said to me.”
Dante furrowed his brow at her in a mock-ferocious scowl.  “Word of advice, okay?  Do not tell a guy that he’s sweet.  It totally ruins the big, tough macho man image we all work so hard to keep up.”
Cara walked the short distance to his side of the table and wrapped her arms around his neck, giving him a loud smooch on the cheek.  “It was still a really, really sweet thing to say,” she murmured.  “Even coming from a big, tough macho man like you.”
She squealed in surprise as he pulled her onto his lap, and then held onto his neck for dear life.  At the feel of her soft buttocks rubbing against his crotch, he was instantly hard.
“Does that feel sweet to you?” he growled, intentionally grinding his erection against the cleft of her ass.
Cara shook her head, wiggling around until she was straddling him.  “I, ah, wouldn’t use that particular word to describe that part of your anatomy, no.”
His hands ran up and down her denim covered thighs before starting on the buttons of her white cotton shirt.  “Yeah?  What words would you use then?”
She whimpered as he dispensed of first the blouse then her bra in mere seconds before cupping her opulent breasts in his palms.  “Oh, ohh.  Um, I - I guess I would describe it as - oh, God - hard and - and huge and, well, how about talented?”


Dante snickered.  “I’ll take talented over sweet any day.  And speaking of sweet, let’s get these clothes off of you so I can have my first dessert of the evening.”