Avery Flynn's TROUBLE, one of the five books in the upcoming BAD BOY HOMECOMING series, releases June 27th, but we couldn't wait to share an excerpt! Get a sneak peek below and preorder your copy today! 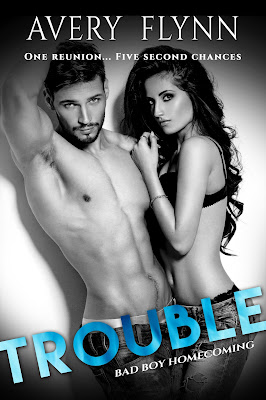 A high school reunion is about to get down and dirty and a whole lot more complicated in this new romance from USA Today bestselling author Avery Flynn.


Brains and a badass attitude. That’s all troublemaker Leah Camacho took with her when she left Catfish Creek. She’d promised herself she’d never go back, but when the invite to her tenth high school reunion arrived along with the chance to show everyone who doubted her what a success she’s made of herself, she couldn’t resist. However, when she discovers a 15-carat, stolen diamond in her rental car’s glove box, there’s only one man she can turn to for help—the same sexy, stubborn domineering man who’d smashed her heart all those years ago.


Sheriff Drew Jackson knew a long time ago that Leah Camacho was nothing but trouble and has sworn to never get caught up in her again—no matter how damn sexy she is or how badly he’d failed to forget her. But, when the woman who test drove his heart right into a concrete wall rolls into Catfish Creek with some serious bad guys on her tail, it’s up to him to keep her safe—even if that means guarding her hot bod 24/7 without giving into temptation or losing his mind.

Find out more about the BAD BOY HOMECOMING series on the website here!

Read an Excerpt from TROUBLE

Drew stood in the kitchen doorway wearing a scowl and a very tiny blue towel slung low across his hips. Water droplets clung to his chest and Leah watched, unable to look away, as one drop made the downward trek across his hard abs to disappear behind the towel. It was enough to make her brain short out.

"What in the hell was that?" Drew asked, stalking toward her.

She swallowed past the sand pit in her mouth and—out of a sense of primal survival desperation—moved so the small, round kitchen table was between them. It wasn't that she was afraid of him. More like she was afraid of what she wanted to do when she was near him—every dirty thing she could possibly imagine.

He glanced down at the table and back up at her with a knowing smirk. "And how were you doing that?"

Her cheeks burned. Damn it. Why was it always like this with him? Taking a deep breath, she clicked together her bad attitude, using it as a shield against his cocky charms. "I called in a favor to get more information about the Rhinestone Cowboys."

He spread his legs wide and crossed his arms over his broad chest. "You don't need to know more."

His stance couldn't have screamed "I strong man, you weak woman" any more if he tried.

This wasn't how she worked. She wasn't about to entrust her life to some random FBI agents who were more concerned with catching the man in charge rather than keeping her safe. And Drew? She might be physically safe with him, but emotionally was a whole other story.

"I'm not going to sit around Catfish Creek and wait for those two goons to make their move."

"That's the stupid plan the Feds came up with and you agreed to." He shoved his hand through his wet hair, making it stand up as he rounded the table to her side.

Her pulse picked up as he neared and desire warm and slick sent a shiver of anticipation through her body. She couldn't control her body's reaction to him and it pissed her off as much as it turned her on. He really was the one man she'd never been able to stop herself from wanting, which is exactly why she had to fight against it so hard.

"I'm not going to sit back and wait for the other shoe to drop. That's not the way I roll."

"No, you just roll over everything in your path without any thought about the consequences."

"All the more reason why I can't wait for the Feds to do their job." Frustration over the situation and her body's reaction to the half naked man in front of her, she pushed past him, her only goal being to get out of the kitchen before she did something she'd regret, "I'm going to get ready. Until I know my next move I have to act like everything's normal. That means picking up my high school reunion welcome packet and saying hi to all the bitches who think I slept my way through the entire varsity football roster and the assholes who started that rumor in the first place."

"If that's the way you feel about coming to the reunion then why are you even here?" he asked.

"Why come back?" she asked. "To see if anything had changed." 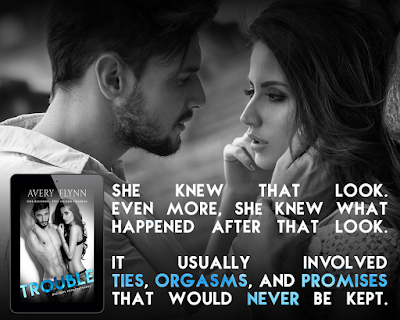 Avery Flynn is an award winning, USA Today bestselling romance author. She has three slightly-wild children, loves a hockey-addicted husband and is desperately hoping someone invents the coffee IV drip.

She was a reader before she was a writer and hopes to always be both. She loves to write about smartass alpha heroes who are as good with a quip as they are with their *ahem* other God-given talents. Her heroines are feisty, fierce and fantastic. Brainy and brave, these ladies know how to stand on their own two feet and knock the bad guys off theirs.