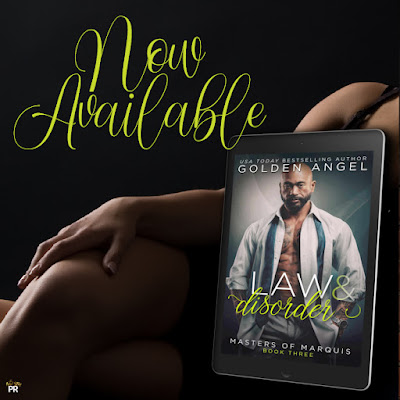 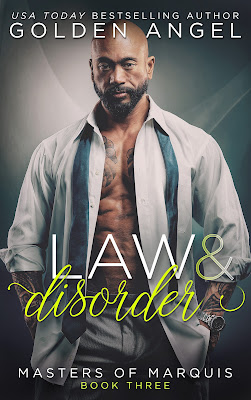 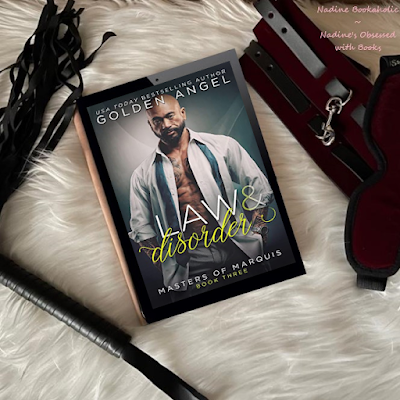 Another great read in the Masters of Marquis Series.

I am loving this series, in this installment we have Lawrence " Master Law" and Iris as our main couple, if you have read the previous book you know that Iris is Master Andrew's sister and she has a knack of getting herself into trouble, in this glorious book Iris finds herself on punishment for a month with Master Law the one to watch over her to make sure she doesn't interrupt a scene again. Now I will admit to reading this book before book two, which I did read a few days later, so I didn't know exactly what had happened but it was explained in brief detail so you know but when I read MASTER CHEF, I was able to see how the whole scene unfolded and Iris' previous interactions with Master Law.

I loved the chemistry between Master Law and Iris even if he did fight it at the beginning, and the fact that he was the only one that didn't care who her brother was was an added bonus. Iris found that she liked to behave for him and looked forward to the end of the night when he would tell her that she was a "Good Girl" for not interrupting anyone's scenes, which was hard at times...especially one night.

This story had a lot going on and I for one loved the ride, I cannot wait for SWITCH PLAY, Quinton and Samantha's story, which comes out later this year.

“Still drooling over Master Law?” Rae elbowed her in the side. Dressed in a pink and green tutu, which matched the two green braids amid the many long brown braids, and a pink bra, she looked as if she could be on her way to a rave right now. The bright neon colors were gorgeous against her brown skin, and Iris had a moment of stark envy. Neon colors like that always washed her out.

“I am not drooling,” she responded indignantly. As if she would ever drool over a man. Salted caramel butter bars, sure. Men? No. Not even Jason Momoa. “I am lusting from afar on my completely inappropriate crush, with no drool involved.”

Even as she joked, a niggle in her stomach made her squirm uncomfortably. While she might joke about it, she wondered if there was more beneath it than she wanted to admit. Like, yeah, she had a little crush.

It had turned out Law wasn’t the unreasonable hardass he’d made himself out to be. When she’d put in the effort, he actually noticed. Praised her for it, even. It might be sad that something so little could make any kind of impact on her, but it did.

While he might have called her ‘trouble’ a month ago in Patrick’s office, he’d been willing to let his perception change once he saw her trying. That was really rare in her world.

“He is hot,” Avery said, glancing over. “I don’t usually go for bald guys, but he pulls it off.”

“Yeah, he does,” Domi joined in, causing Mitch to frown. “He’s like a sexy Filipino Mr. Clean, but with facial hair.”

Giggling, Domi tipped her head back at her boyfriend with his full head of blond hair.

“That’s what you get for insisting on coming to ladies’ night.”

“Nick will be here when he’s done for the night,” Avery said encouragingly, patting Mitch on the shoulder. He looked as though he was considering going all Dom on Domi’s ass. It kept her on her toes that he could flip a switch, just like that, and suddenly, her bratty mouth was in trouble.

On the other hand, Iris had a feeling Domi liked to provoke it. She might look like a pixie, so petite and cute with a riot of dark brown curls, but she was a total brat when she wanted to be.

She exchanged a look with Rae, the other single in their group. They were happy for Domi and Avery, but Iris felt a bit of envy. She wasn’t sure she would find what they had here at Stronghold. Even though she and Andrew had agreed to come on opposite nights when they wanted to scene, his friends were still always around. While she got that he didn’t want her to go to clubs where she might not be as safe as she was at Stronghold, it was almost too safe at Stronghold.

Being a sub for the Dominance class had been nice because it had been at Marquis, and she hadn’t been around her big brother’s friends, who had a bad habit of coming over to talk to her when she was in discussions with a prospective Dom. Except they didn’t really come over to talk to her. They came over to talk to the Dom who had approached her, and it wasn’t as though they were trying to chase him off, but that’s what ended up happening every time.

It was a little demoralizing.

Rae’s problem was she totally had a thing for Mitch’s friend Brian but wasn’t willing to admit it. Brian was one hundred percent a Daddy Dom, and Rae insisted she had no interest in a Daddy Dom, even if she dressed like a baby girl whenever she was at the club. It was too bad because Iris thought they’d make a good couple, but it wasn’t her business.

“Are you two crazy kids planning on playing tonight?” she asked Mitch, distracting him from his contemplation of whether or not to Dom out on Domi.

“Yes.” He tugged one of Domi’s curls, pulling it down and letting it go, so it sprang back into place. “I’ve reserved one of the rooms, but she doesn’t know which one yet.”

“It’s the interrogation room,” Domi said, a little smile curving one side of her lips.

“It’s important to maintain an aura of mystery to keep the relationship interesting,” Mitch said a little louder, acting like he hadn’t heard her.

Mitch got a little louder.

“Which is why I make sure to regularly surprise Domi.”

“Are you two going to the interrogation room tonight?” A smiling face appeared behind Avery but not Nick—Brian quickly followed by Mitch’s friends, Kincaid and Zach, who were holding hands. Though Iris noticed Zach glanced over at the Lounge area, where Amy was sitting and chatting with her friends Caroline and Morgan.

“Yes.” Domi grinned when Mitch grabbed a fistful of her hair, bending her head back so she was forced to look up at him. The move also made her breasts move within her corset.

“It’s not the interrogation room, little brat, and you’d better watch it, or you’re going to get more than you bargained for tonight.” The threat was made with a growl. 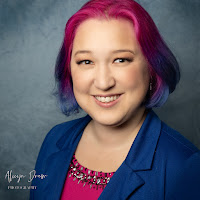 Golden Angel is a USA Today best-selling author and self-described bibliophile with a "kinky" bent who loves to write stories for the characters in her head. If she didn't get them out, she's pretty sure she'd go just a little crazy.

When she's not writing, she can often be found on the couch reading, in front of her sewing machine making a new cosplay, hanging out with her friends, or wandering the Maryland Renaissance Fair.