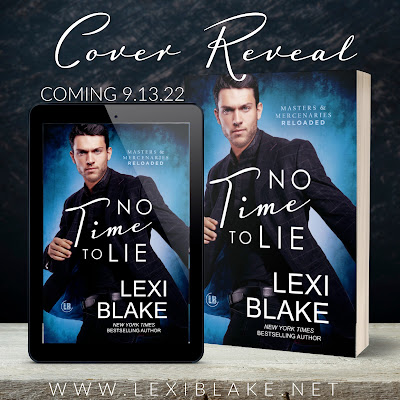 She’s the one that got away.
This time he’s not letting her go.

No Time to Lie, an all new thrilling and spicy, second chance romance in the Masters and Mercenaries: Reloaded Series from New York Times bestselling author Lexi Blake is coming September 13th, and we have the delicious cover!

Drake Radcliffe has spent half his life in the shadows. Recruited by the CIA when he was barely out of high school, Drake doesn’t know how to have a normal life. While most people his age were playing sports or video games, he was playing spy games with the world’s most dangerous adversaries. It has been a life filled with thrills and adrenaline, but it’s also been lonely. All that might change when a mistake from Drake’s past rears its ugly head and he’s forced to face the only woman he ever loved—the one he’d vowed to stay away from.

A beacon of love and compassion

Taylor Cline committed the cardinal sin in her world—she fell for another operative. Drake was everything she wanted in a man, until he broke her heart. She had one unforgettable night with him and then he never looked back. Her future threatened and family in ruins, she shut down and moved on, hoping to never see him again. Just as she is beginning to put it all behind her, a critical assignment puts her under his authority and right back in his arms.

A deadly mission that brings them together

From the wilds of Wyoming to the glittering cities of Europe, Drake and Taylor must race against time to uncover the truth and expose an evil organization. The stakes couldn’t be higher. If they fail, the world could crumble. If they succeed, they could finally have everything their hearts desire.

New York Times bestselling author Lexi Blake lives in North Texas with her husband and three kids. Since starting her publishing journey in 2010, she’s sold over three million copies of her books. She began writing at a young age, concentrating on plays and journalism. It wasn’t until she started writing romance novels that she found success. She likes to find humor in the strangest places and believes in happy endings.