The Darkest Destiny (Lords of the Underworld #15.5) by Gena Showalter ~ Blog Tour with Excerpt 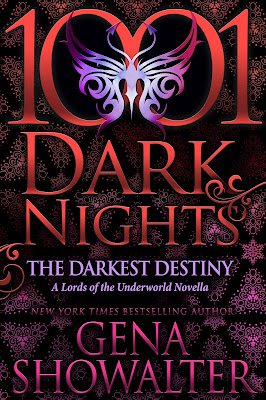 Forsaken. Deathless. A monster in every way. Mostly, Brochan is determined. He craves what fate promised him—the woman who will help him conquer a heavenly kingdom. He will stop at nothing to win her.

Viola, Keeper of the demon of Narcissism, lives for a single purpose—treating herself and her pet to the best life possible. But a crazed warrior is now appearing everywhere she ventures, ruining her fun . . . tempting her beyond reason and keeping her at a razor-edge of desire.

Though legions of males have attempted to win her, all have failed. Somehow, this rampaging beast is tearing down her walls, one by one, claiming he owns her heart and her very destiny. To be with him, however, she must defeat the only force strong enough to destroy her—love. 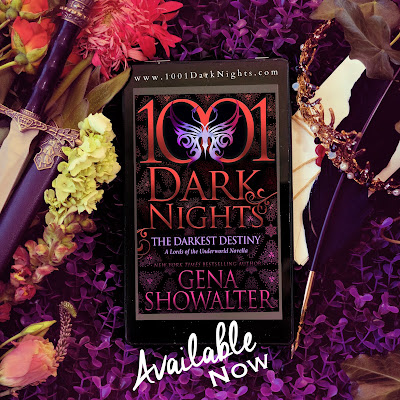 No, he couldn’t be. The rogue had also delivered cleaning supplies and clothing: T-shirts and sweatpants she’d rather die than wear, as well as a French maid costume. The cruel beast obviously taunted her.

She was right the first time. Definitely hate him.

When next she caught sight of him, she would tell him. During every delivery, he had somehow remained hidden, as if he’d known when she slumbered, the coast clear. Even though she didn’t have a set schedule or know when she would succumb to the need for rest. Did he ever ponder their kiss? Or crave more of her?

A fresh tide of anger frothed. He’d gifted her with the best kiss of her life, the truth of his adoration drowning out the demon’s lies. Then he had rejected her. Abandoned her.

He must know what separation from an adoring public did to her. He’d followed her for months. But still, he stayed away?

That settled it. No more kisses for him!

Tremors shook her as she motored forward. When her knees almost buckled, she whimpered. The weakened demon was feeding, weakening her. The heartless fiend had even begun revealing those long-buried memories, the terrible truth now so clear…

As she’d smiled and chatted in those recollections, she’d destroyed people with her words. Males and females, mortals and immortals, had withered under her praises. Because her praises were insults!

Scraping noises halted her. Her ears twitched. Did she detect huffing too?

Gasping, she pressed herself against the nearest wall, hiding in a shadowy corner. Though she was brave—the bravest!—she knew there were times to be leery. This was one such time. She had little strength and few weapons at her disposal.

Had the Forsaken found her? Maybe Brochan had returned for good. Perhaps a stranger had stumbled upon the realm. What if Fluffy had arrived? 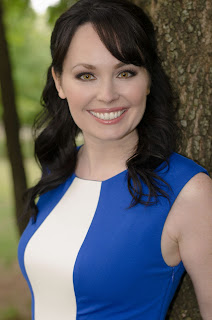 Gena Showalter is the New York Times and USA TODAY bestselling author of a multitude of sub-genres within romance: paranormal, Fantasy, contemporary, and young adult. She’s also written standalone novels, novellas and anthologies, as well as co-authored a nonfiction guide about how to write a book in a year.

Gena lives in Oklahoma with her husband, two adult children who grew up way too fast, and menagerie of dogs and cats who enjoy farting while she works, walking across her keyboard during pivotal scenes and demanding pets at all hours of the day and night. Her novels have appeared in Cosmopolitan’s Red Hot Reads and Seventeen magazine. She’s been interviewed on Nightline and mentioned on Orange is the New Black—the very moment her family decided she might be a real writer after all.

Chances are good she’s hard at work on her next novel. Chances are even better that the book is a twisted tale featuring an alpha male with a dark side and the strong woman who (lovingly…sometimes) kneecaps him.