Marymount girls are good girls. We’re chaste, we’re untouched, and even if we weren’t, no one would know, because we keep our mouths shut.

Not that I have anything to share anyway. I never let guys go too far. I’m behaved.

Beautiful, smart, talented, popular, my skirt’s always pressed, and I never have a hair out of place. I own the hallways, walking tall on Monday and dropping to my knees like the good Catholic girl I am on Sunday.

That’s me. Always in control.

Or so they think. The truth is that it’s easy for me to resist them, because what I truly want, they can never be. Something soft and smooth. Someone dangerous and wild.

Unfortunately, what I want I have to hide. In the locker room after hours. The bathroom stall between classes. The showers after practice.

My head swimming. My hand up her skirt.

For me, life is a web of secrets. No one can find out mine.

I cross the tracks every day for one reason—to graduate from this school and get into the Ivy League. I’m not ashamed of where I come from, my family, or how everyone at Marymount thinks my skirts are too short and my lipstick is too red.

Clay Collins and her friends have always turned up their noses at me. The witch with her beautiful skin, clean shoes, and rich parents who torments me daily and thinks I won’t fight back.

At least not until I get her alone and find out she’s hiding so much more than just what’s underneath those pretty clothes.

The princess thinks I’ll scratch her itch. She thinks she’s still pure as long as it’s not a guy touching her.

I told her to stay on her side of town. I told her not to cross the tracks.

But one night, she did. And when I’m done with her, she’ll never be pure again.

*Tryst Six Venom is a standalone, new adult romance between the wealthy princess with a temper for what’s hers and the hard girl from the wrong crowd. One battles convention. The other, her pride. But nothing will stop it. 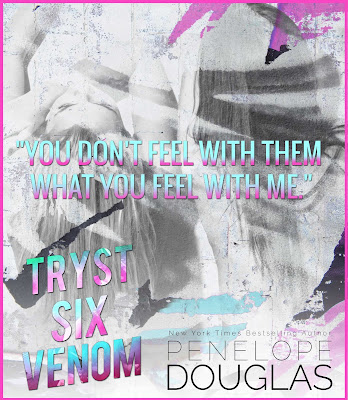 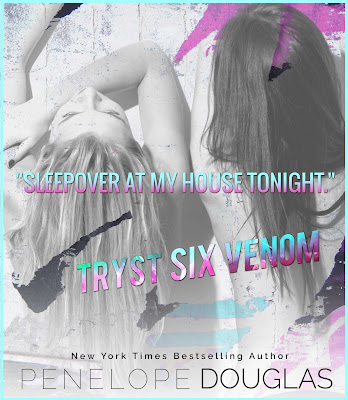 I stalk down the nearly empty row, drop my bag, and look at her. She turns her head, sees me and rises, grabbing her backpack, but I slide into the seat, grab her wrist, and yank her ass back down.

“Sit,” I growl through my teeth, feeling heat rise up my neck as she crashes back into the wooden pew, her jaw flexing.

There’s no point in denying myself any of this. I’m a bitch, but only to her, and only because it feels so good. Fuck it.

“Do something for me?” I ask her, keeping my voice low as students fill the rows around us, and the altar servers light the candles. “Move your ass a little faster down the field than my grandmother this Saturday, or is that too much trouble?”

Liv doesn’t look at me, just stares ahead as she lets out a quiet little laugh. “I haul ass down that field.” Relaxing back into her seat, she hangs her elbows over the back of the pew, and her shirt creeps up a little. I spot the switchblade she keeps hooked over the waist of her skirt, but hidden on the inside, that only I seem to know about. So far anyway. She goes on, “I’ll never understand how a princess who can’t pass a ball for shit and brags to anyone who will listen about being a Swiftie,” and she does air quotes, “‘even before she went pop’ is our team captain. Oh, wait. Yes, I do understand. Daddy is useful. When he’s there.”

My father didn’t get me that position. She can think what she likes.

But I grin and turn toward the front of the church, my arm brushing hers.

That was like four years ago when I said that.

But she just mumbles, “I couldn’t care less about your Twitter and your twenty-eight followers.”

“At least I don’t lose a dozen every day,” I retort.

“The world just doesn’t like tattooed feminazis with hairy armpits,” I tell her, my gaze catching the dimple on her cheek as she smirks, “who pass judgments like all the other constipated Captain Americas on social media who act like they really know anything when they’re just angry their life sucks donkey nuts.”

The dimple grows deeper, her matte red lips pursing to keep her amusement at bay. My heart thumps, and for a moment, I can’t look away. Sometimes I get lost, looking at her. The shape of her nose that I’m kind of jealous of. How soft the lobe of her ear looks. The way she chews the corner of her mouth sometimes.

“Is everything okay?” someone says, snapping me out of it.

I turn my head, seeing Megan Martelle standing over us, holding a stack of collection baskets. Her blue eyes flit between Liv and me, knowing very well that this isn’t a friendly conversation, but lucky for her, this isn’t any of her damn business.

“Fine, thanks,” I reply, my tone a big enough hint she’d have to be blind to miss.

But she looks to Liv instead. “Liv?”

Excuse me? It’s not the name. It’s how she says it. Like they know each other.

Liv must give her some gesture or something, because Martelle gives me one last look and then slowly leaves, continuing down the aisle toward the back of the church without another word.

What the hell is she thinking? Does she want to become my next hobby or something?

I reach down and pull my backpack closer before turning my eyes back to Liv to see if she’s watching her leave.

But she’s staring at me instead, amusement in her eyes.

“What the hell are you smiling at?” I demand.

She never loses her cool, and it pisses me off.

But she just replies, “You have a tattoo.”

Her gaze drifts to my hand, and I squeeze my fingers together, covering it. All over again, I feel the needle carve into the inside of my middle finger on my left hand.

Fair enough. I’d mocked tattooed feminazis, an umbrella term I tossed her under, when, in fact, she doesn’t actually have any tattoos. Not even the one of her family’s little Sanoa Bay gang—the snake and hourglass that she wears on a bracelet around her wrist. Her brothers all seem to have it inked on them somewhere.

Her eyes hold mine, maybe waiting for a response or daring me for one, but the light coming in from the stained-glass windows catches the coppery glint of the strands in her dark hair, a lock hanging over her eye as the rest spills around her shoulders. A dozen or so little braids decorate her hair, none of the ends secured with rubber bands. She looks like a warrior girl in one of those futuristic dystopian movies.

And all of a sudden, nothing is hot anymore. It’s just incredibly warm.

I squeeze my fingers tighter, the lines inked on the inside of my finger making the four quarters of an inch on a ruler, very few ever notice the lines, and those who do probably just assume I’ve leaked pen on myself.

Within that inch we are free. One inch.

“Clay?” she says, her tone different.

I don’t realize I’m staring off until I bring my eyes back into focus and see the black of her Polo shirt. I lift my gaze, seeing a worried expression on hers.

Her eyes shift to my hand on the pew in front of us, and I notice that it’s shaking.

I inhale hard, angry at myself. Why would I not be okay?

She grabs my backpack. “You need one of your little blue pills?”

But I snatch the pack out of her hands and glare at her. “If you let her touch you,” I bite out, changing the subject. “She will live to regret it. I don’t even have to leave this seat to ruin her life.”

Liv looks back at me, and I want to get closer—get in her face, because I want a reaction.

“She won’t be able to take it,” I growl in a low voice. “I will keep going until she can’t take it.”

I can ruin anyone’s life from my phone. It would be fun. And easy.

“You’re not embarrassing our team,” I finally tell her.

She holds my gaze and then draws in a breath, another fucking air of delight written all over her stupid, fucking face. “I don’t like women who chase me anyway,” she says. “When I want them, they know.”

A tingle spreads up my spine, and when I expect to feel anger at her boldness, something else comes over me instead.

When I want them, they know. How do they know? What does she do?

But she rises from her seat without elaborating. “Excuse me,” she says, and takes her bag, trying to leave.

But I stomp down the kneeler, grab her wrist, and yank her to her knees. She sucks in a breath as she catches herself on the pew in front of her, and I pick up my backpack and rise.

I don’t stay to see her reaction. I spin around, ignoring the spying eyes from those around us, and leave the chapel just as Mass begins.

When I want them…

I blink long and hard. Jesus.

Penelope Douglas is a New York Times, USA Today, and Wall Street Journal bestselling author. Her books have been translated into fifteen languages and include The Fall Away Series, The Devil's Night Series, and the stand-alones, Misconduct, Punk 57, Birthday Girl, and Credence. Please look for Tryst Six Venom and Motel, as well as the Hellbent series, coming next!

She lives in Las Vegas with her husband and their daughter.