Treasured, a sexy must read novella in the Masters and Mercenaries Series from New York Times bestselling author Lexi Blake and 1,001 Dark Nights, is available now! 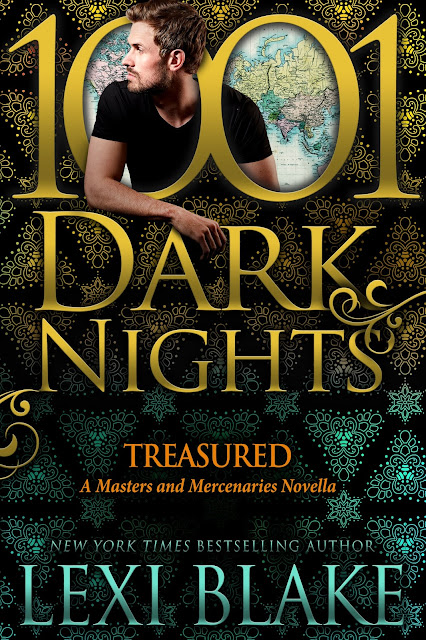 David Hawthorne has a great life. His job as a professor at a prestigious Dallas college is everything he hoped for. Now that his brother is back from the Navy, life seems to be settling down. All he needs to do is finish the book he’s working on and his tenure will be assured. When he gets invited to interview a reclusive expert, he knows he’s gotten lucky. But being the stepson of Sean Taggart comes with its drawbacks, including an overprotective mom who sends a security detail to keep him safe. He doesn’t need a bodyguard, but when Tessa Santiago shows up on his doorstep, the idea of her giving him close cover doesn’t seem so bad.

Tessa has always excelled at most anything she tried, except romance. The whole relationship thing just didn’t work out for her. She’s not looking for love, and she’s certainly not looking for it with an academic who happens to be connected to her boss’s family. The last thing she wants is to escort an overly pampered pretentious man-child around South America to ensure he doesn’t get into trouble. Still, there’s something about David that calls to her. In addition to watching his back, she will have to avoid falling into the trap of soulful eyes and a deep voice that gets her heart racing.

But when the seemingly simple mission turns into a treacherous race for a hidden artifact, David and Tess know this assignment could cost them far more than their jobs. If they can overcome the odds, the lost treasure might not be their most valuable reward. 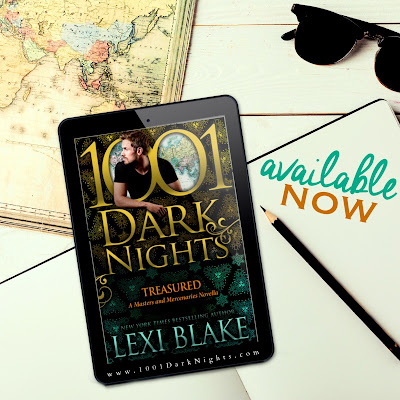 What the hell was she doing?

Tessa glanced down at her watch. She was standing in front of her building ten minutes early, and there was a big part of her that wanted him to be late. Really late. Annoyingly late.

There had to be something about the man that wasn’t perfect beyond his connection to her employer.

She’d come down when she realized if she stayed inside one minute more she was going to decide to change again. Because she’d been halfway to convincing herself that she could do a fine job as a bodyguard in that curve-hugging dress that gave her so much confidence. Lots of bodyguards wore four-inch heels and a push-up bra. Yeah, sure they did.

Coming down here had saved her so much discomfort because in her line of business, slacks, a sensible shirt and shoes, and a blazer were the only way to go. The blazer hid her shoulder holster in a way that off-the-shoulder sex dress never would. And she didn’t care that Hollywood assassins could stuff any number of weapons between their thighs. Hers did not work that way.

It’s not a big deal.

The words David had said haunted her. What did that mean? It’s not a big deal. It had felt like a big deal. Not texting that smart hottie back had been a big fucking deal to her. She’d agonized over it, and he’d just kind of let it wash over him. He’d taken his shot and moved on. She had thought of nothing but him for weeks.

Or he was saving face by playing it cool and she was being ridiculous. The man was making this easy on her and she was inwardly complaining that he wasn’t making it harder. It was perverse, but then she had deeply conflicted feelings about David.

Feelings she could maybe work out over the course of this week. She could get to know him and then she would see he wasn’t as perfect as he seemed to be. Most men showed their true colors when a woman spent too much time with them. He wouldn’t be as patient as he seemed. His charm would wear off when she took charge and he got annoyed.

Yes, this could be exactly what she needed.

Especially if he was late. 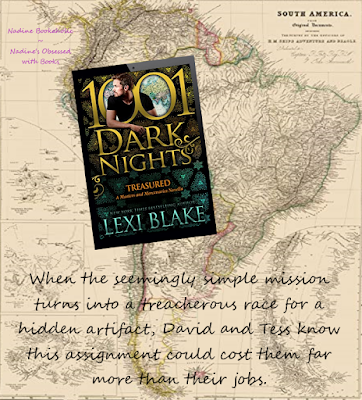 Another great novella in the Masters and Mercenaries Series brought to us by 1,001 Dark Nights and Lexi Blake, I love this collaboration because it allows readers of the series to get stories for characters we wouldn't otherwise have and it allows new readers to the series to jump in and see what it's all about without the pressure of starting from the beginning.
In TREASURED we have David Hawthorne (hot nerd alert!, College Professor, Dom, and Stepson to Sean Taggart) who is the next generation of Taggart's and Tessa Santiago (works for McKay-Taggart and recently broke off engagement to Michael Malone). They meet by chance and have an instant connection but when Tessa figures out that David is a Taggart she ghosts him. I felt so bad for him but thankfully we don't have to wait long before fate intervenes and Tessa is assigned as his bodyguard when he travels to a private island in South America to do some research on a biography he is writing.
This book has it all...chemistry for days, tons of suspense, a great couple that you are rooting for right from the first chapter, and of course tons of Ian Taggart's words of wisdom.
If you haven't read any of the M&M series yet I highly recommend you jump in now.
Happy Reading!!!