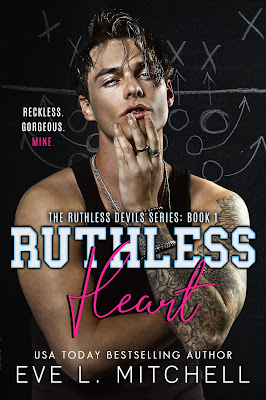 She is his enemy. He is her nightmare.

Freshman year at Cardinal Saints College went by without a hitch for Ava, but sophomore year is proving to be more troublesome. The reason? The Santo boys. Three football stars who have it all: looks, money, talent and the world at their feet. No one messes with the Devils. You’re either with them or against them…and you’d have to be stupid to be against them.

Ava isn’t stupid, but one night of being in the wrong place at the right time is coming back to haunt her. One of the Santo boys—Jett—is out for blood. Specifically, her blood. Thankfully, he doesn’t know who she is, and Ava plans to keep it that way.

Sophomore year threatens to stop Jett's progression to the championships and, more importantly, his plan to play in the NFL. All because of some mystery blonde. But he has a plan: find the threat and eliminate the threat. Jett is ruthless in his pursuit to find the girl who threatens his career.

They say there’s a thin line between love and hate, and neither is prepared for the consequences when they cross that line.

Three guys, three girls, one game. Are you ready to meet the Devils?

Being an avid reader from a young age, Eve still considers herself to be a reader first. She believes there is nothing better than getting that new book either on your e-reader or in your hands, and the fact she may bring that excitement to a fellow reader, fills her with wonder. She writes under a pen name because otherwise her Secret Agent status will be revoked.

Eve lives in the North East of Scotland, with her three coffee machines and her significant other, Mr. M. She enjoys NFL Football, music and having long conversations with the voices in her head, which sometimes turn into the stories she writes.