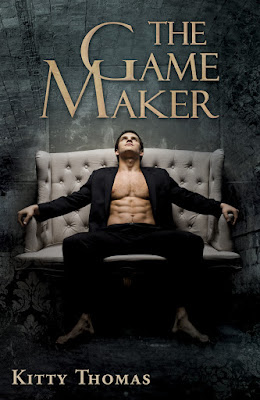 I was too isolated. I was about to be evicted. I made a final desperate call to the man who ruined my life, but he didn’t come for me.

And then there was Seven. When I first woke in the cell, I thought he was my captor, but he is a pawn, like me.

Seven is beautiful and kind. I want him so much I can barely breathe. He wants to protect me from our captor, but he can’t.

We are both locked inside a game neither of us can ever hope to win, and even though it’s wrong, I’m starting to want both men, not just the good one… the monster as well. 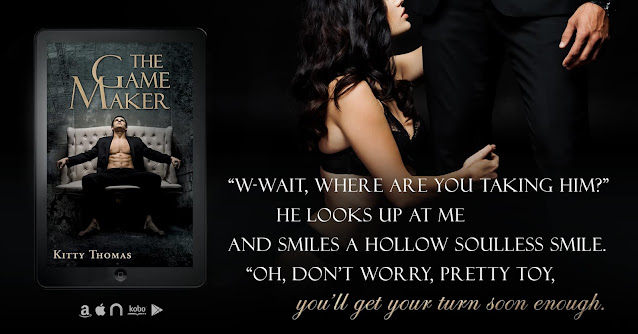 My head is pounding when I regain consciousness. I can’t bring myself to open my eyes. I’m lying on a hard surface, which seems weird to me. At first I think I’m lying on the ground outside where I passed out, but there are no city noises. Instead, I hear classical music being piped in from a speaker above me.

And I smell… roses. One of those highly fragrant varieties. I must be at Andrew’s place. But why the fuck did he leave me on the ground? It’s at this point that I realize I’m naked. Also, Andrew doesn’t listen to classical music.

Instinctively, I want to bolt upright and cover myself, but I don’t have that kind of reaction time. And it’s a real struggle to open my eyes. When I do, I’m momentarily grateful to be in a dimly lit room.

“A-Andrew?” I croak out. I want to scream at him for dumping me on the ground in his apartment, but I can barely choke his name out. I wait for my eyes to adjust. Everything around me is dark gray, and there’s no furniture in this room.

I push myself off the ground into a sitting position and wait for my vision to go back to normal so I can get a sense of where I am. Did Andrew put me in here? He’s a bigger bastard than I thought. This is when I finally realize I’m not alone.

There’s a large, dark figure sitting on the ground against the far wall.

“Andrew, you piece of shit. What are you doing?”

I probably shouldn’t speak to the person who rescued me from homelessness this way, but I don’t care. He needs to grow the fuck up. I expect him to yell at me or threaten to kick me out, but what I hear instead chills me.

This is definitely not Andrew’s voice. No accent. Plus it’s deeper and more frightening. Suddenly the adrenaline hits me, and I have a sudden burst of speed. I back as far from him as I can until I meet the opposite wall. I shield my breasts from his gaze and shift to a sitting position where he can’t see other private parts—even though I know he’s already seen everything. And possibly done more. I was unconscious after all.

As my vision clears further, it seems that the light in the room gets a little brighter. He’s wearing a white T-shirt and jeans, no shoes. His dark hair looks a bit disheveled. He’s very attractive. Heart-stoppingly beautiful, actually. It’s the kind of unearthly beauty that makes me feel relieved for a moment because I know I’m still passed out. This is a weird dream. I just know it is.

It’s not a dream, whispers the same evil internal voice that decided to tell me I was in a cell.

It takes several minutes before my mind is willing to accept what has happened. I don’t know if someone put something in my drink or if I was just that drunk. I don’t know how long this man stalked me before he took me, but I know I’m looking at the man who kidnapped me.

And now the tears come. It takes every ounce of willpower not to break down into hysterical sobs. This reaction is making a lie out of everything I thought I knew about myself. The strength and control I thought I had in my life. Even up to very recently, I thought I was handling things.

But this is the last straw. It’s the last tiny push I needed to find myself in a free fall.

Another dark thought pushes its way into my mind. No one is going to be looking for me. Does the man who took me know that? Andrew sure as shit won’t look or file a police report.

My landlady might not realize why I didn’t pack my things up first, but as nice as Carolyn is, she’ll just be glad she doesn’t have to have me forcibly removed. She isn’t going to report my disappearance to the police. What disappearance? I’ve been evicted. I’m not supposed to be there.

There is no reality now but me and my captor. I’m trying desperately not to think about the reasons this man took me. To rape me? To kill me? To torture me? He sure as shit isn’t going to let me go when he’s done with whatever’s on his nefarious agenda. I know you can’t appeal to a sociopath, and nobody normal does something like this.

“What?” For a moment, my confusion overtakes my fear. What does he mean he didn’t put me in here? Of course he did. Who the fuck can he blame? The invisible demon perched on his shoulder?

He shakes his head slowly. “I’m in the same boat as you, sweetheart.”

I glance back and forth between us. He has clothes on, and they don’t look like he’s worn them for days. Meanwhile, I’m naked. We are not in the same boat. 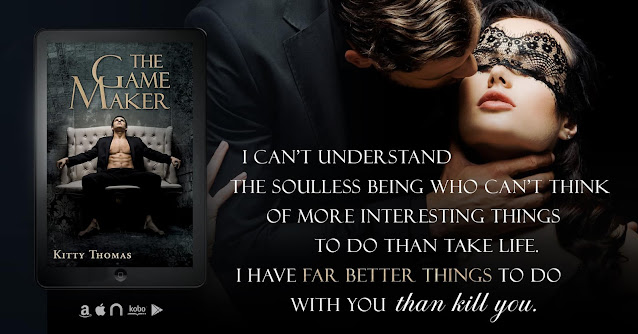 KITTY THOMAS writes dark stories that play with power and have unconventional HEAs. She began publishing in early 2010 with her bestselling COMFORT FOOD and is considered one of the original authors of the dark romance subgenre.

To find out FIRST when a new book comes out, subscribe to Kitty's New Release List: KITTYTHOMAS.COM