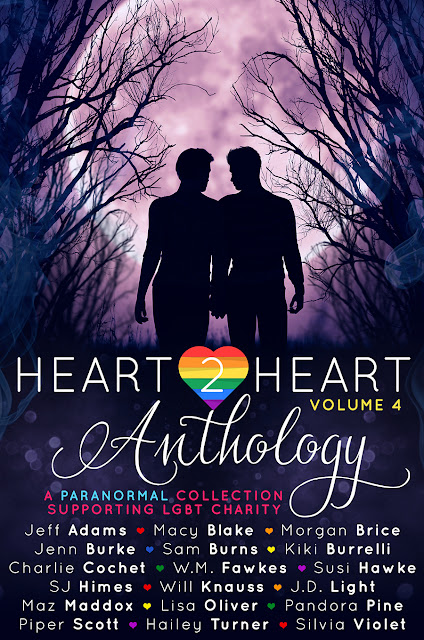 This collection will be available for only 90 days before it’s gone forever.

Once upon a time, a bunch of authors wondered...
Why should Heart2Heart - the phenomenally successful dating app - only work its magic in the human world when lonely lycans, dejected dragons, and jilted jackalopes need love, too?

In this new paranormal universe, mages and shifters, vampires, psychics, and even humans, will reach out to Heart2Heart podcast host Gene E. Del’Amp for help finding a magical match… and they just might find that talking about their woes helps their wishes come true.

Eighteen of your favorite gay romance authors have come together to bring you brand-new paranormal and urban fantasy stories inspired by reader suggestions!

Once again, all proceeds from this collection will go to the authors’ favorite LGBTQ charities, to ensure that love in all its forms will be celebrated and protected every single day of the year!

All Proceeds Go To Charity: 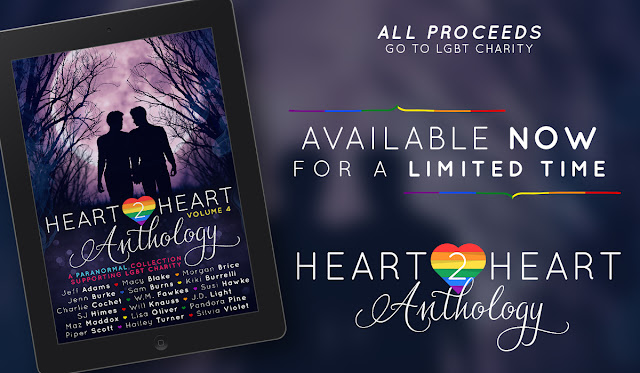 
H2H is a passion project that began as nothing more than a “what if” said among friends. Since then, across three volumes and with the involvement of twenty-six incredible authors of gay romance, the Heart2Heart anthologies have raised over $80k for LGBTQ charities around the world.

Because Heart2Heart is a charity project, all of the work involved in creating and promoting each volume is donated. From the author's creative work, to the editing and formatting, to cover design and promotion, all donation efforts by the Heart2Heart team contribute to the project's ability to donate as much as possible to the chosen charities for each volume.

Heart2Heart is a unique anthology project in the way each story is brand new content that’s inspired by reader suggestions and fits within an overall theme. H2H volume 4 is no exception. In December 2019 we received more than 350 suggestions from readers that our authors then used to inspire their characters and the wishes that would come true thanks to the Heart2Heart podcast.

To shake things up with this new collection, the decision was made to bring together some of the best and brightest authors of paranormal and urban fantasy gay romance for an alternate reality experience. Working within the classic elements of shifters, vampires, mages, and more, we’re excited to present sixteen brand new stories with all of the humor, feels, and spice you would expect from Heart2Heart. 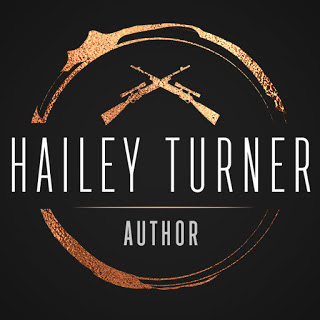 A Special Excerpt from Hailey Turner's Heart2Heart Story "A Caller From San Francisco":


A brief description of your story: As a selkie, Ethan knows to keep his seal skin safe and never give it away. With his clan on the other side of the country, he’s lonely and wishes constantly for someone to come home to. Everything changes when a fire ravages through his home, and he has to put his trust in a complete stranger.


Life would be easier if he’d chosen an apartment in Berkeley, but the San Francisco Bay was a heavily trafficked body of water, and Ethan hadn’t wanted to deal with all the boats. Plus, many of the shoreline parks closed overnight, and Ethan preferred swimming at night where no one could see him change form. Living in San Francisco meant easier access to the beach, even if he didn’t go as often as he’d like.

Ethan was willing to make the sacrifice for the good of his clan, but sometimes it was isolating, even with what friends he’d managed to make in the Bay Area. Sighing, he unzipped his jacket a little while he waited on the underground platform. It was warmer in the station than up on the street, and he was feeling a bit overheated suddenly.

March was cool in parts of the Bay Area, but it got chilly during the night. Usually, Ethan could regulate his body temperature better than his human friends simply because he was a selkie. Tonight though, he stayed a little too warm even when he finally got on the first train. He thought it was a car where the heating was broken and perpetually on, but even when he switched cars, Ethan still found himself sweating.

He tried to ignore how uncomfortable he was on the trek home. He turned up the music a little and zoned out, trying not to fidget so much. He was definitely going to change forms and sleep in the tub tonight. Soaking in water would make him feel a lot better.

Then he made it home and realized nothing would be right again.

The flashing lights of multiple firetrucks up ahead on Sutter Street caught Ethan’s attention. The bus braked to a stop on the wrong side of the intersection since two police cars were blocking the way forward. Ethan turned off his music as the bus driver opened the doors.

“If you’re getting off, you need to get off here,” she said.

Ethan scrambled off the bus, heart pounding in his chest as he rushed across the street, barely cognizant of the lights changing. A police barricade had been set across the sidewalk, and Ethan’s sneakers skidded over wet cement. Smoke hung heavy on the air, stinging his nose as he finally caught sight of the devastation that used to be his apartment building—and where he’d left his seal skin, as he always did when venturing out into the world.

Ethan didn’t know he was crying until he tasted tears on his lips.

What are your thoughts on being part of Heart2Heart volume 4?
I’ve loved being part of this volume! Getting to play with magic this time around was so much fun, and the company of my fellow authors was stellar as always. I was happy and honored to be invited back. Heart2Heart is such a fun community effort, and I had a blast.

Where can readers find you online:
You can follow me on other social media platforms, join my Facebook readers group, and sign up for my newsletter right over here: linktr.ee/haileyturnerwrites 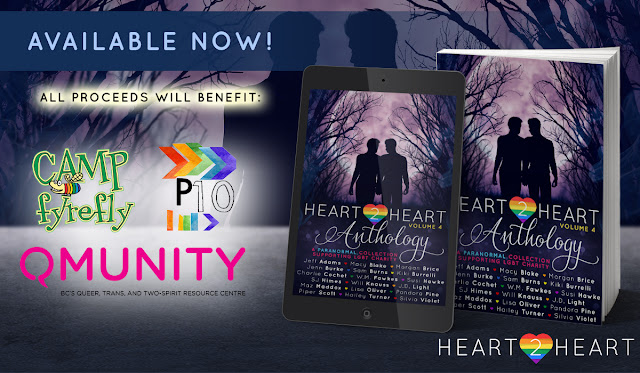 More information on the Charities chosen for Volume 4:


As with previous editions of the anthology, we’re honored to be donating our net profits to three deserving charities.
🌈 - Camp fYrefly (multiple locations, summer camp)

“Camp fYrefly is a summer camp and leadership retreat designed for lesbian, gay, bisexual, trans-identified, two-spirited, intersexed, queer, and questioning youth, (LGBTQ2S+) and planned in part by a committee of the same youth it seeks to serve. Founded in 2004 by Dr. André P. Grace and Dr. Kristopher Wells, Camp fYrefly is designed to help youth develop the leadership skills and personal resiliency necessary for them to become agents for positive change in their schools, families, and communities.”
https://www.ualberta.ca/camp-fyrefly
🌈 - Project 10 (youth services and advocacy, Quebec)

Through advocacy and education, using a harm reduction approach, Project 10 aims to facilitate the empowerment of youth at individual, community, and institutional levels with a particular emphasis on supporting individuals and groups who experience multiple and intersecting oppressions.

Services are free of charge, confidential and anonymous, and are offered in English and French.”
http://p10.qc.ca/
🌈 - QMUNITY (local services, BC)

“A non-profit organization based in Vancouver, BC that works to improve queer, trans, and Two-Spirit lives. We provide a safer space for LGBTQ/2S people and their allies to fully self-express while feeling welcome and included. Our building serves as a catalyst for community initiatives and collective strength.”
https://qmunity.ca/about/

These are all great Charities and we need to take care of our youth and the next generation. Love is Love. Be safe and kind. No one should have to suffer for who they are or who they love!!

Authors and their stories:

Charlie Cochet - A Caller from Windermere

J.D. Light - A Caller from Springfield

Jenn Burke - A Caller from Ottawa

Kiki Burrelli - A Caller from Portland

Macy Blake - A Caller from Knoxville

Morgan Brice - A Caller from Pittsburgh

Pandora Pine - A Caller from Boston

Piper Scott - A Caller from Chicago

Silvia Violet - A Caller from Savannah

SJ Himes - A Caller from Montreal

Susi Hawke - A Caller from Austin 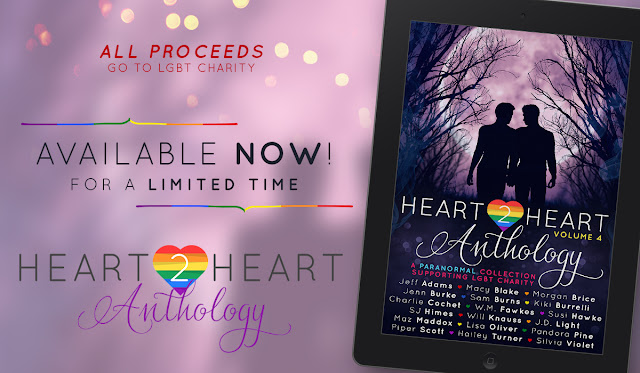