Today we have the release blitz for Sarah Robinson’s WYLDE FIRE! Check it out and be sure to grab your copy today! 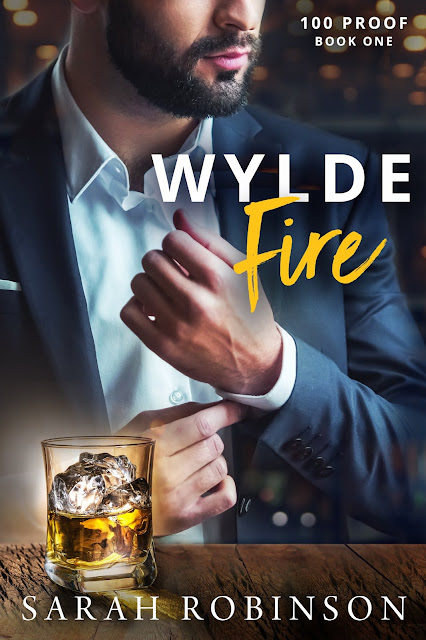 Sam Wylde is ready to prove he’s more than just the privileged son of a wealthy Southern dynasty.

Wyldefire Whiskey is poised to take Nashville by storm—and with any luck, overshadow the scandal of his cheating ex-girlfriend marrying his brother. The only problem? This gruff country boy has no idea how to throw a launch party that will get people talking.

The answer to everything might just be Holly Glen.
A party wrapped up in one tiny woman, Holly is tattooed, tempting, and exactly the event planner Sam needs to liven up his brand—and his life. He can give her what she needs, too.

All it will take is a ring on her finger.

Falling in real love with his fake wife was not part of the plan—but one shot of Holly isn’t going to be enough. 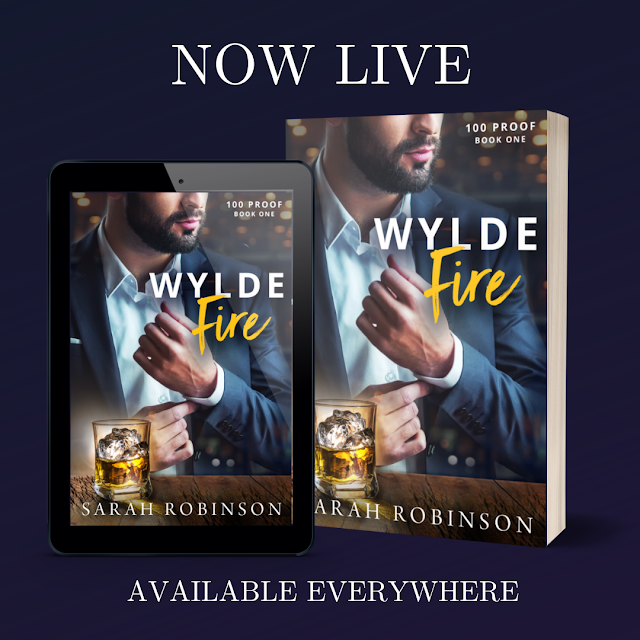 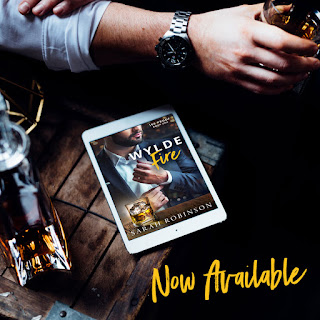 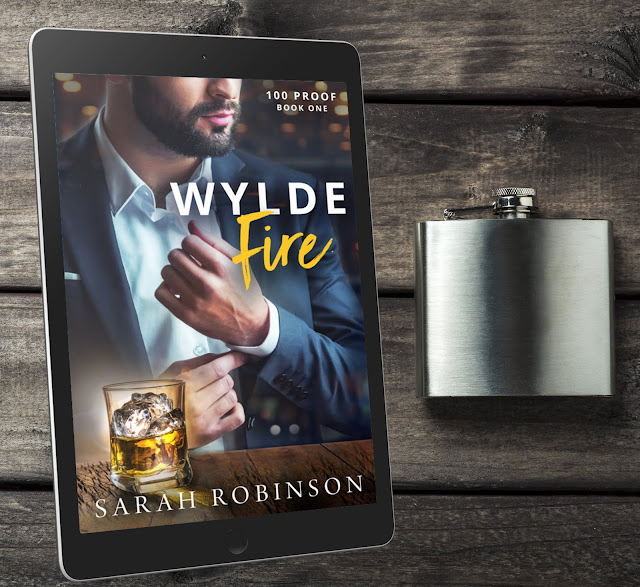 It's been a while since I have read the "Fake Relationship" trope and now I am wondering why. This was a fun read, that I was able to devour in just one afternoon. I found myself laughing out loud and shedding a few tears as well. Sarah Robinson did a wonderful job with creating characters that made you not only like them but care about them. I am looking forward to more from this series.

Sam's brother is getting married to his ex-girlfriend and Sam needs a date for the wedding...if you ask me I would just skip it but hey it's family and all so you know you have to put on your big girl panties and muddle through, well in his case it would be boxer-briefs but you get the point.

Holly's family had a devastating accident and it brought her back to her hometown where she is the owner / operator of a business that does event planning which is perfect for what Sam needs in order to get Wyldfire Whiskey's launch party the talk of the town, state, country...you see where I'm going with this.

Holly also cares for her sister which is becoming harder and harder since her income isn't as hefty as it had once been, maybe just maybe Sam and Holly can help one another out.

I would love to say this was a second chance romance as well because Holly had a crush on Sam in high school but Sam never really showed interest in her then so I really can't but there is that feel of it because Holly's crush really never went away even after all this time.

If you enjoy the fake relationship trope or even a good contemporary romance I would say grab a copy and start this series today, I see great things are heading our way with the 100 Proof Series. 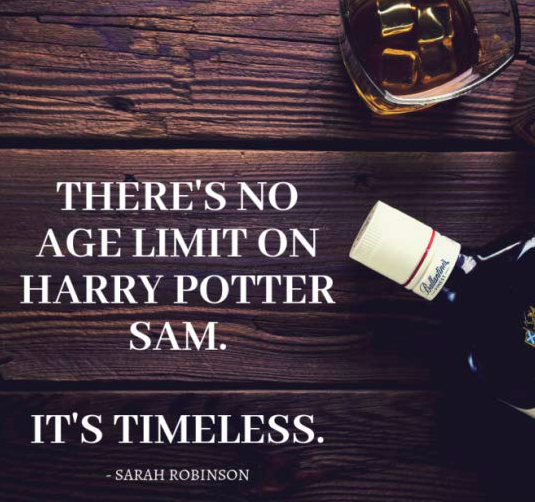 "You cannot do this to me, Cassie," Sam Wylde argued over the speakerphone attached to his truck's dashboard. He cringed as his Southern drawl came out a little thicker than usual. Frustration did that to him, and right now it was taking everything in him to not start cussing.

With a deft twist of his wrist, he steered his truck into the parking lot next to Town Hall, cutting off another car with a halfhearted wave of acknowledgement. He needed to pick up several permits before the city offices closed, leaving no room for pleasantries.

Damn, for a Saturday, the lot sure is packed.

He sighed and forced his attention back to the phone call. "We've got a few months until the launch of the entire brand. Everything I've done the last two years is riding on this."

"I'm really sorry," Cassie, his event planner, said from the other end of the phone. Or former event planner, apparently. "But I can't be in two places at once, and neither can my influencers and vendors. We're booked for that day now."

Teetering on the brink of exploding, Sam breathed in slowly. "But. You. Signed. With. Us. First." He ground the words out slow and steady.

"Technically, I haven't signed an actual contract. I was helping you out as a favor to Noah," Cassie informed him. "And where I go…so do my connections."

Sam needed no reminders that his cousin was a major pain in his ass. There was no doubt in his mind Cassie quitting on the launch was directly related to Noah Wylde breaking things off romantically between the two of them yesterday. Yes, yesterday. Sam was pretty out of touch with the small-town gossip vine, but even he'd heard about the messy, public break up last night. Bringing his cousin into the business had been at the not-so-subtle suggestion of his father and uncle, and Sam had never regretted acquiescing to their demands more.

Despite his frustrations with his cousin, Wyldefire Whiskey was still Sam's pride and joy. He and his cousin, along with a silent partner, Caleb Daughtry, had built their own distillery from the ground up and begun crafting their own brand of Tennessee whiskey. The first batch was being bottled now, and, in a few months, they'd be on liquor store shelves nationwide. He'd hired Cassie to plan their giant grand opening launch party at a swanky hotel in Nashville, only a short distance from the distillery—and Sam's hometown—in River Ridge, Tennessee. It was the last step in a massive public relations campaign for the entire brand.

"There's no one else in town who does events this large, Cassie. Especially last minute." He hated begging, but right now, he had no other choice. Cassie was an extremely well-connected socialite across the South who had come highly recommended by his PR company. He'd already put thousands of dollars into the brand's publicity, and a launch party filled with celebrities and social influencers she'd bring was supposed to be the final piece they needed to make their whiskey a household name.

"Like I said, I'm sorry," Cassie continued, zero remorse in her tone. "I'll make sure you get your check back on Monday. Have a great weekend!"

The line went dead and Sam slammed his foot against the brake, coming to a dead stop in the middle of the parking lot. His hands were clenched so tightly around the wheel, there was a good chance he'd snap it in half.

"Sonofabitch!" His anger bubbled over, exploding at no one in particular.

Disconnecting the call, he placed his foot back on the gas and turned into the next aisle of cars to look for a spot. Pulling his truck past the open spot just enough to give him room to reverse, he shifted gears and anchored his arm behind the passenger seat, looking out the rear window.

A little blue coupe turned into the spot seconds before he could. So quick, he almost missed it entirely. Are you kidding me?

Sam shifted into park right in the middle of the aisle. Shoving the door open, he hopped down from the cab and stomped around the bed of his truck toward the coupe.

"Hey!" he shouted at the driver, throwing his hands up in the air. "What the hell was that? You stole my spot!"

Sam’s next words jammed in his throat, startled for a moment when the perpetrator, a tall, slender woman with fiery hair, climbed out of the driver's seat as he approached. As angry as he was, he was first and foremost, a hot-blooded, all-American man. It was impossible not to notice her curvy figure as she crossed her arms over her chest, or the way the sun, just beginning to drift lower in the late afternoon, illuminated the varying crimson hues in her scarlet hair. She leveled intensely silver eyes at him.

Sam pushed away the distracting thoughts, trying to manage his irritation—and growing arousal. "Darlin, you parked in my spot." He tried for the nicest tone he could muster, but it still came out sounding terse.

"Looks like I did." Molten eyes, somehow both angry and intoxicating, stared back at him, unrelenting.

She's admitting it? His anger dissipated slightly, which he realized was a bit odd since the admission should have infuriated him. Something about her blatant honesty was disarming and…refreshing? Or maybe it was those soft pink lips that smirked up at the corners, that had him feeling…forgiving. "Excuse me?"

The tiniest flash of guilt crossed her expression, but she masked it quickly, firming her jaw and pushing back her shoulders. The seductive smirk returned. "I almost crashed when you cut me off pulling into the lot. Maybe if you were paying a little more attention, rather than yelling at your dashboard, you wouldn't have nearly killed me, and you wouldn't have lost your spot. Really, I'm doing you a favor. You can take a few laps around this pretty parking lot and find your inner Zen."

His mouth twitched, but he held tight, refusing to let the smile come. "So, you're…what? The karmic delivery man?"

"Woman, actually, but…yeah. I guess today I am." A black tank top hugged her gentle curves and showed off one arm full of colorful tattoos as she reached into the trunk of her car and pulled out a large cardboard box then set it on the asphalt. "Someone needs to be."

Her last words were quieter, as if to herself, but he heard them nonetheless. He noted the strain and tightness in her tone, and found himself wondering what the story was behind it.

But then she bent down. Every coherent thought fled his brain as Sam paused to admire her blue jeans molded to a firm round ass. Damn. It'd been too long. Starting a business and having his heart broken all at the same time will do that to a man.

Forcing his eyes away, Sam glanced back at his truck, resigning himself to finding another place to park. He didn't have the time to fight with this woman who was making his blood heat, in more ways than one. Plus, admittedly, he had cut her off and not even given it a second thought.

She kept her back to him, continuing to unload boxes from the trunk of her car.

"Sorry about cutting you off," Sam grumbled, though he knew she could still hear him. He didn't like apologies. He rarely gave them, but he felt caught off guard by her and didn't like it. "I'll let you have the spot this time."

She paused slightly while he spoke, but didn't look back at him. "Let me?" When she did whirl around, her hands were straight down and fists balled. "Samuel. Jed. Wylde. You didn't let me do anything. I took that spot to teach you a lesson in manners—something you're sorely lacking."

Sam raised a brow, a small smile on his lips despite the tightness in his chest. She knows me? Shit. Was she a one-night stand he'd forgotten? Another one of Noah's conquests with a vendetta for the Wylde boys now? He racked his brain, sweating when he couldn't place her.

"Honestly, I don't know why I even bothered. You haven't changed one bit." Hands on her hips now, she was shaking her head in that same disapproving manner he'd gotten most of his life. He was familiar with disappointing women, and it was one of the many reasons why he kept most of his relationships to only a night or two.

Between the sheets, he never left a woman less than completely satisfied. It was his life outside the bedroom that seemed to be the problem.

Sam let his eyes rake over her body—from her cowboy boots to her bright pink lips. How could he have forgotten those lips? "We've met before?" 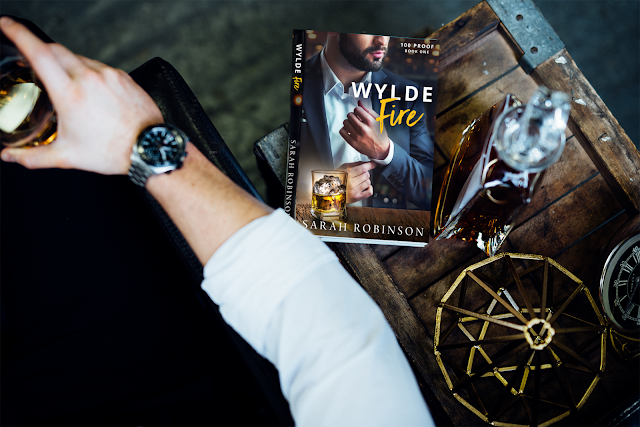