Tight Quarters (Out of Uniform #6)

“Sexy, sweet and heartfelt, Annabeth Albert's Out of Uniform series is a fresh take on Navy SEALs that will delight and entertain romance readers.”

--Layla Reyne, author of the Agents Irish and Whisky series. 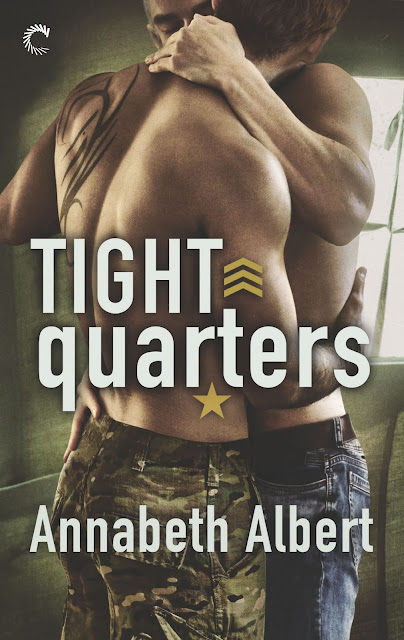 Series: Out of Uniform #6

Petty Officer Bacon, a navy SEAL and ace sharpshooter, has been on the front lines of more than his fair share of dangerous ops. Yet when a minor injury relegates him to the beta team, he’s tasked with what may be his riskiest assignment yet: the silver fox journalist he’s babysitting is the hottest, most charismatic man he’s ever encountered.

Award-winning journalist Spencer Bryant may have been named one of Pride magazine’s most eligible bachelors of the year, but he’s not looking to change his relationship status. He’s a consummate professional who won’t risk his ethics or impeccable reputation by getting involved with a source. Even a sexy-as-hell military man. But while Spencer can resist his physical attraction to Bacon, he has less control over his emotions—especially when the mission goes sideways and the two men are trapped alone.

Getting out of the jungle alive turns out to be easy compared to facing the truth about their feelings for one another back in the real world. And whether or not they can build a future is a different story altogether.

This book is approximately 82,000 words

If you have been following my reviews you'll know I am a fan of Annabeth Albert's work, and with stories like this one it's no surprise. But I did something different this time, I didn't read the ARC given to me right away because I knew that I had a few days after the release before I would be posting this Blog Tour Promo Post so I waited and purchased the audio book, and I am sooooo glad I did. WOW! Greg Boudreaux did a phenomenal job with the narration of this book. I enjoy audio books, the way they envelop you into the story, it really adds another layer to the enjoyment I get from reading and this is why I am so glad I decided to go this route with Bacon and Spencer's story.

We've had glimpses of Bacon in a couple of other books in the Out of Uniform series but we really didn't know much about him until now, and I really really like him not only as a SEAL and Fellow Team Member but as a human being, a man to look up to. He had a rough go of things as a kid and teenager but he didn't let it keep him down, he did what he had to do to become the man he is today and that includes being a good friend to some that may not deserve it.

Spencer, now there is a silver fox that would catch many eyes both of the female and male persuasions but it's Bacon that has caught Spencer's eye. Spencer is a man of substance, he feels its his duty as an investigative journalist to get to the bottom of things that some may not want you to know and shed light on the subject, so to say not many are thrilled with him being embedded with the SEALS would be an understatement but it is something that needs to be done.

Tight Quarters is the sixth book in the Out of Uniform series but it can be read as a standalone. I recommend this entire series, each of the couples have their own different struggles to overcome in order to get their HEAs and the common thread between each of the books are that some are SEALs together and others are friends. Happy Reading!!! 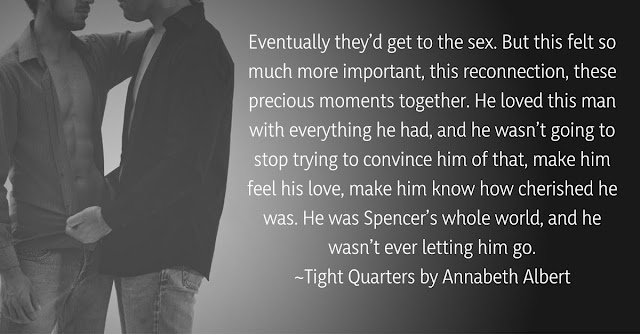 
“But you know, timing’s everything. Maybe not till after this mission, after we’re done with the reporter. You don’t need those rumors.” Curly clapped him on the shoulder.
“This isn’t about Spencer Bryant,” Bacon said firmly. “But you’re right. Waiting makes some sense. I’m not in some huge rush. Just fed up.”
“I hear you,” Curly said as they reached the closed conference room door. He knocked and the senior chief opened it.
“Oh good, Bacon. We need to brief you on what to expect tomorrow.” The senior chief ushered him into the room after dismissing Curly. The small, dimly lit room contained a large table covered in maps, with laptops open in front of the senior chief, XO, and LT.
“You got more for me to do? We’ve got to be shorthanded with Shiny down, right?” He couldn’t contain his eagerness. Now more than ever he was ready to be done with babysitting duty.
“Shiny’s fine. Concussion check was inclusive, and he says he’ll be good to go.” The LT waved away Bacon’s concern. “We talked about having him assigned to the reporter—”
“Excellent idea.” Bacon needed more distance from Spencer. Even as much as he wanted to keep an eye on him, he needed to outrun his rogue impulses before he did something stupid like kiss Spencer. Or even worse, talk to him more, share more than he should.


Rafflecopter prize and code: Reader’s Choice of any Out of Uniform book in paper + surprise swag pack!