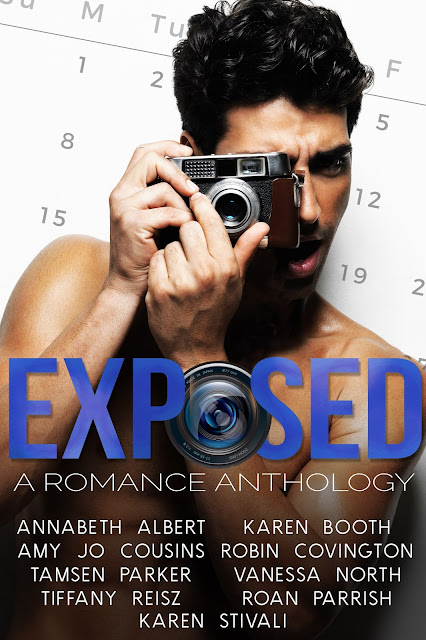 Hot. Naked. Guys. Reading.
When the sexiest Top 30 Under 30 men agree to pose naked for the "Expose Yourself To A Good Book" charity calendar, their hot bodies aren't the only thing that gets EXPOSED. Nine brand new romances with M/F, M/M, F/F and menage pairings from bestselling and award winning authors, there's something for everyone in this limited release anthology.

Annabeth Albert
LEVEL UP
When Landon, a genius physicist, is picked for a charity calendar, he must deal with an inconvenient attraction to Bailey, his rising-star photographer. Can he slay enough demons from his past to ensure a future together with him?

Karen Booth
WISHING
Jobless and painfully single, Samantha agrees to drive musician Duncan to a photo shoot. He’s in town for only five days, so sexy, and she’s eager for a no-strings fling. But Duncan shoots straight for the heart, making her unsure how she’ll ever survive his goodbye.

Amy Jo Cousins
KATE LIKES GIRLS
Garden center manager Kate Rhee is on a mission. No more hook ups with women or second-guessing her recent break up with an unavailable man. Too bad the foxy, pink-haired bar owner she meets at a naked calendar photo shoot has sworn off girlfriends. Because Kate isn’t doing casual. She can totally resist that temptation. Totally.

Robin Covington
GHOST
Oliver Burns publicly bragged he’d sign the reclusive artist “G”- creator of the First Nations graphic novel, Ghost Warriors - to his comic publishing company. But that gets tough when “G” is Gareth Rain – the man he pulled a post-one-night-stand runner on years ago and the man he’s never forgotten.

Vanessa North
RIGGED
For Kaitlyn, seeing her best friend Gordon naked is no big deal—until watching Sean tie him up changes everything.

Tamsen Parker
THROWN OFF TRACK
Teague has been License to Game’s bassist for over a decade, during which time he’s slept with almost everyone in his path. But it’s always felt like going through the motions. Until he sees his bandmate Christian naked at a charity photoshoot and suddenly, he knows what it is to want.

Tiffany Reisz
THE WATERMARK
Jason "Still" Waters' life looks perfect from the outside—money, fame, and the words "World Champion Bull-Rider" after his name. But Jason has a secret, one he never planned on telling anybody...until he meets Simone. She's the kinky girl of his dreams...and his conservative family's worst nightmare.

Karen Stivali
LEGAL BRIEFS
When organizing a naked charity calendar puts Rose's tenure bid in jeopardy, the last person she wants help from is Michael, the gorgeous, arrogant lawyer she butted heads with during his shoot. He'll defend her for free, but if their secrets come out they could both pay with their hearts. 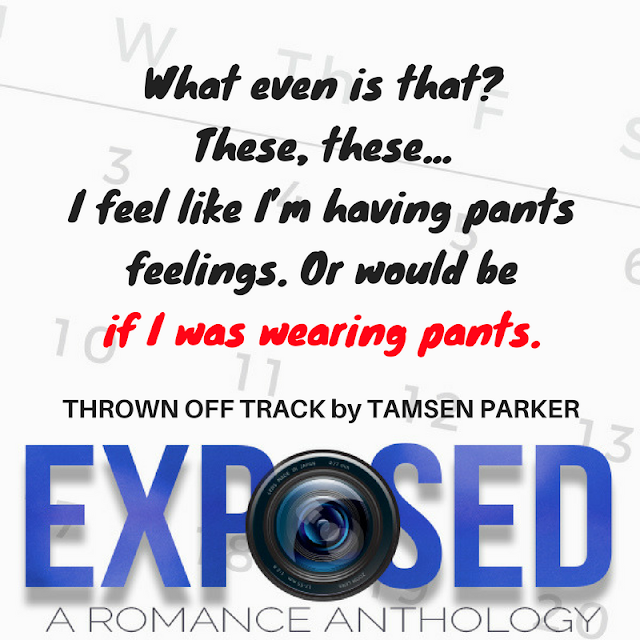 “The authors of this anthology are hoping to show readers that romance series, like the real world, should reflect our society and should feature the stories of people falling in love without regard to their gender and sexuality. That is why you’ll find m/f, m/m, f/f and menage stories all within this collection.” --Karen Stivali, Curator and Publisher, Exposed: A Romance Anthology

“One of my favorite things about my friends in the romance community, aside from their stellar writing skills, is their passionate commitment to having romance novels depict healthy, loving relationships featuring people of all orientations falling in love in varied combinations. The premise for this anthology is that indie bookstore owner Emma Davis and her best friend, college professor Rose Everheart, both owe a debt of gratitude to the literacy foundation that changed their lives. When they’re trying to come up with an idea to raise money for the foundation, they combine the viral popularity of Hot Dudes Reading with the enormous success of the Naked Rowers charity calendars and the idea for Hot Naked Guys Reading is born.” --Karen Stivali, Curator and Publisher, Exposed: A Romance Anthology

“The calendar will feature men who are not only irresistibly sexy, but have been named to Top 30 Under 30 lists in their respective fields, posed in famous libraries throughout the country. The Expose Yourself to a Good Book campaign draws the attention of photographers, reporters and other professionals. People often find love where they least expect it, when they’re not looking for it, so this anthology explores the journeys of not only the models but the crew, the organizers and all the people brought together in the creation of this charity calendar. Readers will find m/f, m/m, f/f and ménage stories, told by award-winning and bestselling authors from the romance community in this limited-release collection.” --Karen Stivali, Curator and Publisher, Exposed: A Romance Anthology 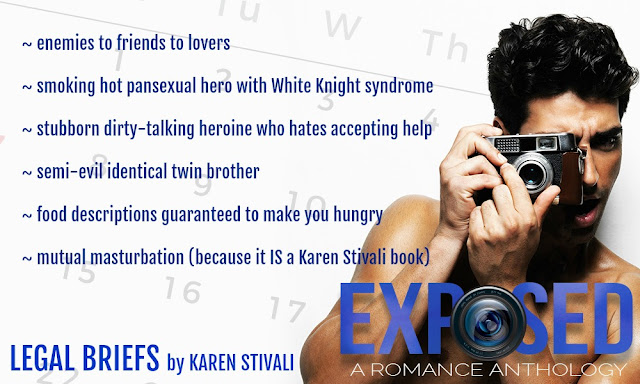 “I missed you.” He murmurs the word as he kisses his way back up to my neck and latches on, his erection pressing into me, making me wish our clothes would magically disappear.
His phone rings and I feel the vibration against my hip.
He fumbles to grab it and glances at the screen. “Shit. I have to take this.” He swipes at the screen looking worried and barks, “What?”
I can’t hear the other side of the conversation, but his face quickly relaxes.
“No, it’s fine. I just can’t talk. I have a…pressing matter to attend to.” He rolls his eyes and I can see him willing the other person to stop talking. “Okay. Call you tomorrow.”
“Everything okay?”
He slides the phone onto the counter and returns his hands to me, grinding against me again. “Yes. Just my brother. Nothing important.”
“Did you refer to your dick as a ‘pressing matter’?”
He grins and kisses me, rubbing against me again. “Is it pressing?”
“Yes,” the word comes out as a groan as he hits just the right spot.
“Does it matter?” He swivels again, and I sigh, dropping my head against his chest.
“Yes.”
“I rest my case.”


Annabeth Albert grew up sneaking romance novels under the bed covers. Now, she devours all subgenres of romance out in the open—no flashlights required! When she’s not adding to her keeper shelf, she’s a multi-published Pacific Northwest romance writer. The #OutOfUniform series joins her critically acclaimed and fan-favorite LGBTQ romance #Gaymers, #PortlandHeat and #PerfectHarmony series.
To find out what she’s working on next and other fun extras, check out her website: www.annabethalbert.com or connect with Annabeth on Twitter, Facebook, Instagram, and Spotify! Also, be sure to sign up for her newsletter for free ficlets, bonus reads, and contests. The fan group, Annabeth’s Angels, on Facebook is also a great place for bonus content and exclusive contests.
Emotionally complex, sexy, and funny stories are her favorites both to read and to write. Annabeth loves finding happy endings for a variety of pairings and is a passionate gay rights supporter. In between searching out dark heroes to redeem, she works a rewarding day job and wrangles two active children.

Karen Booth is a Midwestern girl transplanted in the South, raised on ‘80s music, and forever envious of Judy Blume. She is the author of more than twenty sexy contemporary romances.

Amy Jo Cousins writes contemporary romance and erotica about smart people finding their own best kind of smexy. She lives in Chicago with her son, where she tweets too much, sometimes runs really far, and waits for the Cubs to win the World Series again.

A USAToday bestseller, Robin Covington loves to explore the theme of fooling around and falling in love in her books. Her stories burn up the sheets. . .one page at a time. When she’s not writing she’s collecting tasty man candy, indulging in a little comic book geek love, hoarding red nail polish and stalking Chris Evans.

A 2016 RITA® Award finalist, Robin’s books have won the National Reader’s Choice and Golden Leaf Awards and finaled in the Romantic Times Reviewer’s Choice, and the Book Seller’s Best.

She lives in Maryland with her handsome husband, her two brilliant children (they get it from her, of course!), and her beloved furbabies, Dutch and Dixie Joan Wilder (Yes – THE Joan Wilder)

Drop her a line at robin@robincovingtonromance.com - she always writes back.

Vanessa North is a romance novelist, a short fiction geek, and a knitter of strange and wonderful things living her own HEA in Northwest Georgia with her husband, twin boy-children, and a very, very large dog.

She lives with her family outside of Boston, where she tweets too much, sleeps too little and is always in the middle of a book. Aside from good food, sweet rieslings and gin cocktails, she has a fondness for monograms and subway maps. She should really start drinking coffee.

Roan Parrish lives in Philadelphia, where she is gradually attempting to write love stories in every genre.

Tiffany Reisz lives in Lexington, Kentucky with her husband, author Andrew Shaffer. She has won a RITA Award (The Saint), a Lambda Award (The King), and two RT Booklovers Editor’s Choice Awards (The Siren and One Hot December). Find her online at TiffanyReisz.com.

Karen Stivali is the multiple award winning author of over twenty straight and LGBTQ+ contemporary romances. She writes novels about love…like real life, only hotter. 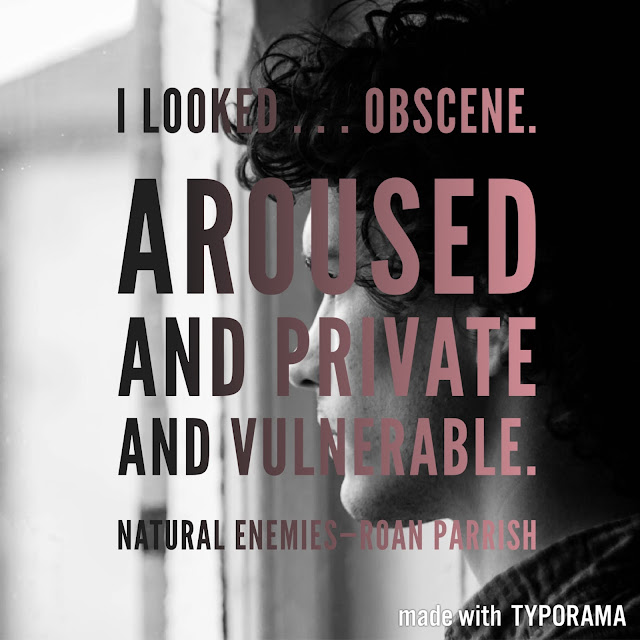 Prize: Enter to win one of three e-copies of any backlist books by any of the contributing authors.