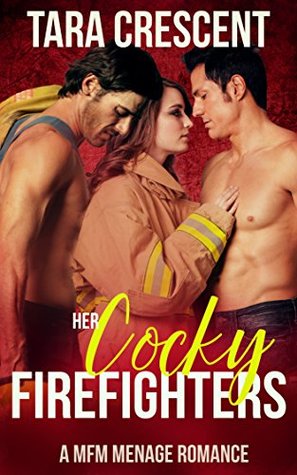 
Six years ago, I had a smokin' hot one-night stand with two firefighters. Then I find out they live in Goat, Oregon. My new hometown.

The chemistry between us is just as strong as ever, and I can’t resist feeding the flames.

Falling in love? I’ve been there, done that, got the t-shirt. Never again.

There’s only one thing I want from Sean and Nick.

I want to hit their hydrants. Handle their hoses. Slide down their poles.

But things are about to get complicated. Goat’s in crisis. An election is tearing the town apart. An arsonist is on the loose. And the spark between us is growing to a blazing out-of-control inferno.

We’re about to get burned.

“Welcome to Goat,” a sign on the outskirts of town announces. “Embrace your weird.”

If you have been following my reviews you know that I am a big fan of Tara Crescent's books, they are not only steamy but they can usually be read in just an afternoon.  Her Cocky Firefighters is the second book in The Cocky Series which can be read as a standalone although I highly recommend reading the first book Her Cocky Doctors. So hot you’ll need two firefighters to douse your flame, let’s be honest who hasn’t had a fantasy about a sexy firefighter....or two ;)

Hailey hasn't had an easy time of things, her fiance ran off with her best friend right before their wedding, her online magazine Girl Power is loosing followers, and her rent is being raised by $300. So to say it doesn't take much for her best friend Lana to convince her to move to the small town of Goat, Oregon and take over as a journalist for the Weekly Goat is putting it mildly. But neither one knew that by Hailey moving to Goat it would put her right into the path of Nick and Sean whom she had an one-night stand - menage style with six years ago.

I loved the chemistry between Sean, Hailey, and Nick, but not only is there plenty of sexy time between the three there is also an arsonist on the loose which keeps Sean and Nick pretty busy. Friendships are made, some are strengthened, all in all this was a fun, sexy read that I highly recommend to anyone that likes a good poly romance with a bit of suspense with it.