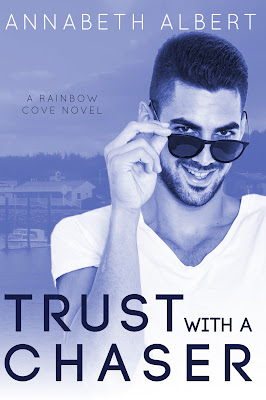 One hot cop. One bar owner out for redemption. One smoking-hot summer fling destined to leave scorch marks…

Mason Hanks has returned to Rainbow Cove, Oregon with one goal in mind: turn the struggling coastal community into a thriving LGBTQ tourism destination. Step one is transforming an old bar and grill into a gay-friendly eatery. Step two? Don’t piss off Nash Flint, the very hot, very stern chief of police who’s not so sure he’s on board with Mason’s big plans.

Nash Flint just wants to keep his community safe and enjoy the occasional burger in peace. He’s not big on change nor is he a fan of Mason’s troublemaking family, especially his rowdy older brothers. But Mason slowly wins him over with fantastic cooking and the sort of friendship Nash has been starving for.

When their unlikely friendship takes a turn for the sexy, both men try to steer clear of trouble. Nash believes he’s too set in his ways for Mason, and Mason worries that his family’s reputation will ruin any future with Nash. Burning up the sheets in secret is a surefire way to crash and burn, and discovery forces a heart-wrenching decision—is love worth the risk of losing everything?

Trust with a Chaser is a 75,000 word stand-alone gay romance with a May/December theme, a hot law-enforcement hero, opposites attract, plenty of sexy times, and one hard-fought, guaranteed happy ending with no cliffhangers. 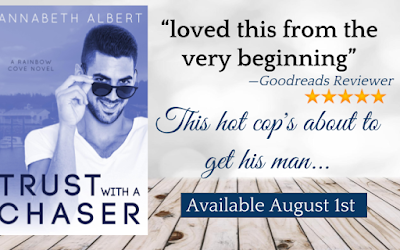 When Adam stepped inside the glorified closet I was using as an office, eyes all twitchy and hands wringing a bar towel, I knew I wasn’t going to like what came out of his mouth.

Fuck. I squeezed my eyes shut and took a deep breath. “Please don’t call Police Chief Flint that. He might hear, and I’m pretty sure he’d find a citation for you. And I am not bailing your ass out.”

“You’re just worried that one of these days you’re going to slip up and call him that.” Adam grinned at me. This was an old argument—he’d been calling Flint that stupid nickname since we were in high school. The hard-nosed cop wasn’t one to cut teen drivers any slack—especially if they were in any way associated with the name “Hanks.” “Anyway, you know he freaks me out. I’ve got no idea what he wants—all our permits are in order, right?”

“Of course.” Standing, I grabbed the folder with the permitting paperwork. I prided myself in the organization I was bringing to the bar and grill that I co-owned with Adam and our friend, Logan. Flint wouldn’t find anything to complain about, not with me in charge. “I’ll go deal with him. You go back to the bar in case we get a rush.”

Adam snorted. Despite it being opening weekend, traffic had been embarrassingly light. We’d worked for weeks transforming the old tavern—a Rainbow Cove institution for decades—into the newly renamed Rainbow Tavern. The gay-friendly bar and grill was our vision for pulling our sleepy little coastal town into the twenty-first century. Logan had crafted a new menu of upscale bar food ready to go, and Adam had innovative drinks specials at the ready. All we needed were customers. And to not run afoul of Nash Flint on our first day of operation.

Flint was a Rainbow Cove institution himself—born and raised here, same as Adam and me, but unlike me, he’d never left, sliding into his father’s shoes as police chief and apparently fitting the role as easily as a pair of broken-in jeans. He’d been Officer Flint last time I’d seen him, almost ten years prior.

Guess I could have seen him had I come down for Freddy’s trial, something I still felt niggles of guilt over, and I told myself that was why my stomach fluttered on my way out to the tavern’s dining room. Unlike Adam, I’d never found Flint particularly…

Sexy. All my thoughts fled as I took in the man sitting in front of the plate-glass window. He dwarfed the small wooden chair, one of dozens that Adam and I had painted bright colors. Broad shoulders stretched the confines of his uniform shirt, biceps bulging under the short sleeves. His cut-glass jaw was firm as ever, as were those hard hazel eyes. But what had been frankly terrifying to my teenaged self made my twenty-seven-year-old libido sit up and take serious notice.

Flint blinked as I approached, head tilting to one side. I’d been getting a lot of that since I’d been back in town. “Mason…Hanks?”

He returned my handshake with a sure grip, only a moment’s hesitation. I guessed he wasn’t all that used to shaking hands with a Hanks. Oh well. I was out to prove to the whole damn town that I wasn’t like my father and brothers, and if I had to start with Flint, so be it.

“Nice place you’ve got here.” His eyes swept around the renovated room—restored antique bar on the far wall where Adam wasn’t bothering to conceal his nosiness, dance floor beyond that, colorful tables and chairs in the front of the bar, only a handful occupied despite the dinner hour.

“Thanks. Our permits are all in order.” I held out my folder. “Liquor license is on top.”

He waved the folder off. “Not worried about that.”

No? Then why the heck was Flint in my establishment? “Good. We’re on the up-and-up. You won’t have trouble from us—”

“Glad to hear it,” he said levelly, eyes skeptical, reminding me that I was, after all, nothing more than a Hanks. “Cheeseburger?”

“That Ringer kid didn’t see fit to give me a menu, but I’m trusting you all offer something approximating a burger? Salad, no fries, and an iced tea.”

“You want to order?” I was still struggling to keep up with him.

“This is a food establishment, right?” He shook his head as if he hadn’t expected more from me, and that rankled.

“Of course.” I crossed the room in long strides, grabbed an order pad from the bar, ignoring Adam’s gaping. As soon as I returned to Flint’s table, I added, “Anything you want. On the house.”

“None of that.” He sighed like my very existence was tiring. “Got my meals from the old tavern for years. They kept a tab open for me.”

“Let’s see if you can cook first,” he said, voice drier than yesterday’s toast. “I thought I’d come by, check the place out.”

“Appreciated,” I said and meant it. Business, any business, was good, but people in Rainbow Cove trusted Flint. If he gave us the seal of approval, more locals might give us a try, make us less dependent on the tourist trade that we were going after. Tourism took a while to build, and our grand plans of making Rainbow Cove an LGBTQ travel destination weren’t going to happen overnight. We needed every customer we could get, Flint included, even if he was the unlikeliest of allies.

“You still haven’t brought me a menu.” He shook his head. “But whatever you’ve got passing for a burger is fine. Nothing vegan though.”

“We’ve got local grass-fed beef, third-pound patty on a brioche bun with a pesto mayo and local gouda. Or—”

“I reckon that will do fine.” Flint always had a bit more country than coastal in his voice. Not Southern, but you could tell he was rural Oregon through and through, and I liked the slow, deep rumble of his words. What I didn’t like, however, was the implication in his tone that he wasn’t expecting much from us.

“Sure you don’t want fries? We have hand-cut sweet potato as an option with a chipotle dipping sauce. As far as salads, I’ve got side, Caesar, spring berry and pecan—”

“I’m on duty here. Kind of pressed for time. The burger and a side salad are fine. I don’t need anything fancy.”

Yeah, well, maybe I want to give it to you. I quashed that thought, same as I had the one about how hot he looked in his uniform. Wanting to impress Nash Flint wasn’t going to get me anywhere.

“I’ll put a rush on it.” I made a note on the order pad, not that it was really needed since Logan hardly had a packed house to worry about.

As I walked over to the window to put in Flint’s order, I noticed more than one table giving him curious glances. Hell, maybe I was wrong about any business being good business. Last thing I needed was Flint scaring away what few customers we had. Not that he was known as a gossip or anything like that, but he was awfully…old school. Traditional. The last kind of guy you’d expect to find at a gay bar, that was for sure, and even though we were attempting to attract a mixed clientele, he stood out.

I really didn't know what to expect with Nash, the Chief of Police in the Small Town of Rainbow Cove, being so far in the closet I really feared he'd never come out, but I guess he was just waiting for the right guy to come along and shake things up.

Mason and Nash wormed their way into my heart right from the beginning. They each brought something to the relationship, there was an equal give and take which was nice to see. Their families, were like the Hatfields and the McCoys, there was a true dislike for one another but luckily Nash and Mason both could see past their families squabbles and find their own happiness.

Trust with a Chaser was a great start to the Rainbow Cove series an I am looking forward to the next book Tender with a Twist. 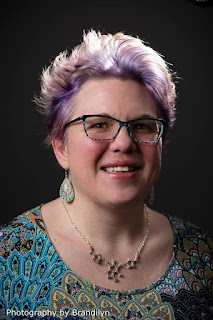