Today I am sharing an incredible giveaway hosted by the 2017 'Best First Book' RITA Nominated Authors! They are giving away 2 prize packs! The grand prize winner will receive a paperback copy of each of the 6 nominated books. A second winner will receive an ebook copy of each of the titles. Be sure to sign up below and check out the authors who are participating and their incredible novels! 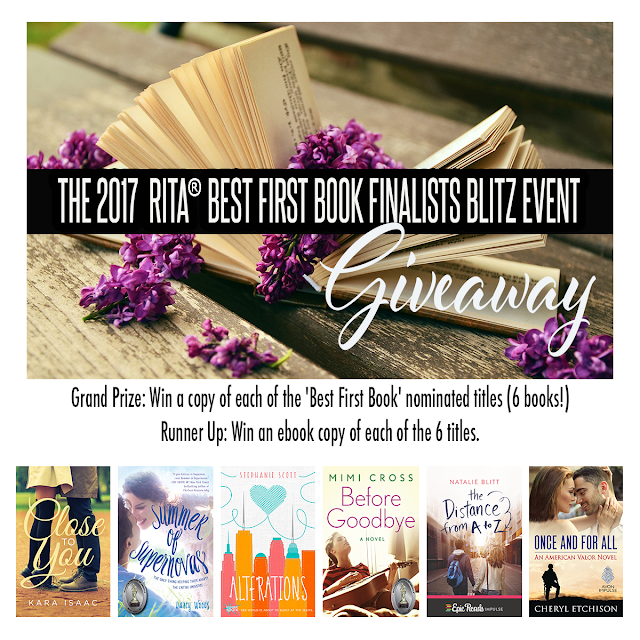 If anyone saw the prom boards Amelia Blanco makes on her favorite fashion app, they'd think Ethan Laurenti was her boyfriend. They wouldn't know that all the plans she's made for them are just dreams, and that she's the girl who watches him from the kitchen while her parents cook for his famous family.

When Amelia's abuelita enrolls her in a month-long fashion internship in NYC, Amelia can't imagine leaving Miami--and Ethan--for that long. As soon as she gets to New York, however, she finds a bigger world and new possibilities. She meets people her own age who can actually carry on a conversation about stitching and design. Her pin boards become less about prom with Ethan and more about creating her own style. By the time she returns to Miami, Amelia feels like she can accomplish anything, and surprises herself by agreeing to help Ethan's awkward, Steve-Jobs-wannabe brother, Liam, create his own fashion app.

As Liam and Amelia get closer, Ethan realizes that this newly confident, stylish girl may be the one for him after all . . . even though he has a reality TV star girlfriend he conveniently keeps forgetting about. The "new and improved" Amelia soon finds herself in between two brothers, a whole lot of drama, and choice she never dreamed she'd have to make.

THE DISTANCE FROM A TO Z by Natalie Blitt

This full-length novel by debut author Natalie Blitt is a pitch-perfect blend of Stephanie Perkins and Miranda Kenneally that proves the age-old adage: opposites attract.

Seventeen-year-old Abby has only one goal for her summer: to make sure she is fluent in French—well, that, and to get as far away from baseball and her Cubs-obsessed family as possible. A summer of culture and language, with no sports in sight.

That turns out to be impossible, though, because her French partner is the exact kind of boy she was hoping to avoid. Eight weeks. 120 hours of class. 80 hours of conversation practice with someone who seems to wear baseball caps and jerseys every day.

But Zeke in French is a different person than Zeke in English. And Abby can’t help but fall for him, hard. As Abby begins to suspect that Zeke is hiding something, she has to decide if bridging the gap between who she is and who he is is worth the risk.

Epic Reads Impulse is a digital imprint with new releases each month.

BEFORE GOODBYE by Mimi Cross

Music means more than anything to high school student Cate Reese; it’s also what unites her with Cal Woods. Devoted classical guitar players, Cate and Cal are childhood friends newly smitten by love—until a devastating car accident rips Cal out of Cate’s life forever. Blaming herself for the horrific tragedy and struggling to surface from her despair, Cate spirals downhill in a desperate attempt to ease her pain.

Fellow student David Bennet might look like the school’s golden boy, but underneath the surface the popular athlete battles demons of his own. Racked with survivor’s guilt after his brother’s suicide, things get worse when tragedy darkens his world again—but connecting with Cate, his sister’s longtime babysitter, starts bringing the light back in.

As Cate and David grow closer, the two sh
attered teenagers learn to examine the pieces of their lives…and, together, find a way to be whole again.


ONCE AND FOR ALL: AN AMERICAN VALOR NOVEL by Cheryl Etchison

The Rangers of the 1st/75th fight hard, train hard and play hard. They are physically strong and mentally tough, disciplined and courageous. But all their military training hasn't prepared them for falling in love.

Rule #1: Military and matrimony don't mix.
But if there's one person Staff Sergeant Danny MacGregor would break all his rules for, it's Bree--his first friend, first love, first everything. Maybe he likes playing the hero. Maybe he's trying to ease ten years of guilt. Either way, he'll do whatever he can to help her.

Bree Dunbar has battled cancer, twice. What she wants most is a fresh start in a place where she can find a new job, and where people aren't constantly treating her like she's sick. By some miracle her wish is granted, but it comes with one major string attached-- the man who broke her heart ten years before.

The rules for this marriage of convenience are simple: when she's ready to stand on her own two feet, she'll walk away and he'll let her go. Only, as they both know all too well, things don't always go according to plan...

CLOSE TO YOU by Kara Isaac

A disgraced scholar running from her past and an entrepreneur chasing his future find themselves thrown together—and fall in love—on a Tolkien tour of New Zealand.

Allison Shire (yes, like where the Hobbits live) is a disgraced academic who is done with love. Her belief in “happily ever after” ended the day she discovered her husband was still married to a wife she knew nothing about. She finally finds a use for her English degree by guiding tours through the famous sites featured in the Lord of the Rings and The Hobbit movies. By living life on the road and traveling New Zealand as a luxury tour guide, Allison manages to outrun the pain of her past she can’t face.

Jackson Gregory was on the cusp of making it big. Then suddenly his girlfriend left him—for his biggest business competitor—and took his most guarded commercial secrets with her. To make matters worse, the Iowa farm that has been in his family for generations is facing foreclosure. Determined to save his parents from financial ruin, he’ll do whatever it takes to convince his wealthy great-uncle to invest in his next scheme, which means accompanying him to the bottom of the world to spend three weeks pretending to be a die-hard Lord of the Rings fan, even though he knows nothing about the stories. The one thing that stands between him and his goal is a know-it-all tour guide who can’t stand him and pegged him as a fake the moment he walked off the plane.

When Allison leads the group through the famous sites of the Tolkien movies, she and Jackson start to see each other differently, and as they keep getting thrown together on the tour, they find themselves drawn to each other. Neither expected to fall in love again, but can they find a way beyond their regrets to take a chance on the one thing they’re not looking for?

SUMMER OF SUPERNOVAS by Darcy Woods

Fans of Jennifer E. Smith and Jenny Han will fall in love with this heartfelt and humor-laced debut following one zodiac-obsessed teen as she struggles to find the guy of her cosmic dreams.

As the daughter of an expert astrologer, Wilamena Carlisle knows that truth lies within the stars. So when she discovers a planetary alignment that won’t repeat for a decade, she’s forced to tackle her greatest astrological fear: The Fifth House—relationships and love. But Wil must decide whether to trust her heart or her chart when she falls for a sensitive guitar player whose zodiac sign points to cosmic disaster.

If Wil’s fate is truly written in the stars, then this summer is about to go supernova. . . .