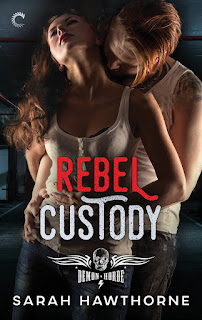 A son in danger
The Demon Horde MC are no strangers to breaking the rules, but making a man pay to get his son back crosses one too many lines for Skeeter. He'll do anything, including play by the book, if it means bringing his son home. Hiring straitlaced attorney Miriam Englestein is meant to solve his problems, not create new ones. One look at her and his good-guy facade goes out the window. He wants to throw his buttoned-up lawyer onto the back of his bike and make her his.

A woman at risk
Miri wants nothing to do with the club. Her father may be in their pocket, but she's on the right side of the law and she intends to stay there. But there's something about Skeeter's plea—something about him—she can't walk away from. While she's tempted to let him do unspeakably wicked and delicious things to her, she can't risk her law practice, or her heart.

A dangerous deception
When Miriam agrees to pose as Skeeter's woman to get details they need for the case, things heat up fast—and it's not long before the lines between business and personal blur, and they're both in over their heads. In the MC world, lies have a way of coming back to you, and they put everyone at risk. 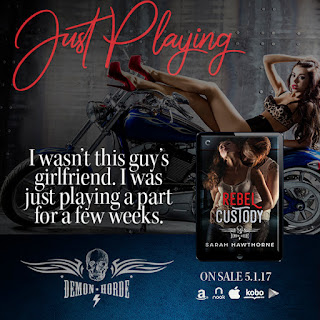 Jean Luc / Skeeter is swoon worthy, this badass biker finds out he has a son that he never knew about and does everything in his power to gain custody of him. LOVE THAT! He didn't take the easy way out and let things stay as they are, he is doing the right thing and in doing that he will hopefully give his son the best life possible. Little did he know that in his pursue to gain his son he will also find his true love.

Mari figured that in practicing family law she wouldn't interact with her fathers clients but when one of the Demon Horde bikers is in need of a family lawyer she has to take the case. When Mari first meets Jean Luc there is a bit of a misunderstanding that had me in stitches.

This story can be read as a standalone but in order to fully understand the "Patching In" you will want to read Enforcers Price first. 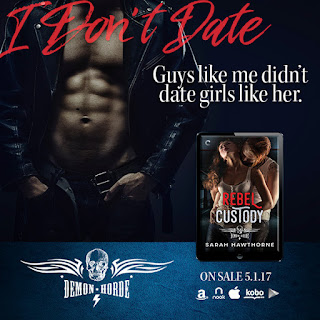 An hour later me and Rip and Clint cut our engines and parked in a field behind the motel. It was easy to track down which room belonged to Davide. There was a beat-up blue truck with Louisiana plates parked at the far end, as far away as possible from the motel office and the security camera.
So we crouched with ivy up to our goddamn shoulders and waited. The lights flickered in the room, like someone was watching television.
“Shit, Skeeter, it’s been forty-five minutes,” Clint muttered in our ivy hole.
A sliver of light shone in the dark motel as someone opened their door. It was a woman coming out for a smoke. She collapsed into a plastic patio chair and lit up a joint. Too short to be Delphie, dark hair. Craggy face. Torn jean shorts. Maybe Davide’s girlfriend? Under the hyperfocus of the binoculars, she looked worn.
Then Davide came out and sat in the other chair. They passed a joint back and forth. The door opened again and showed a small, dark figure. With the bright light of the inside of the room, the person’s features were in shadow. The shadow only went a foot or so past the doorknob. A kid
My heart leaped up into my throat. I tried to breathe, but it just came out as a guttural sound. Even though I couldn’t see the kid clearly, I knew. It was like a brush stroke inside my brain that spread truth. Davide hadn’t come all the way across the country just to shake me down. He was telling the truth.
Holy shit.
I had a kid. 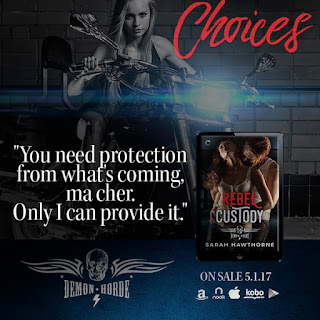 Look for Outlaw Ride (Demon Horde #3) releasing in September 2017 with Carina Press! And be sure to pick up your copy of Enfocer’s Price (Demon Horde #1), available today! 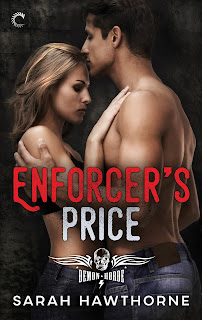 A man looking for redemption
Colt spent eight months in prison for trusting the wrong woman, nearly bringing down his entire motorcycle club in the process. Now he needs to fix the MC's cash flow problems or watch the only family he's ever known fall apart.
Meeting Krista wasn't part of his mission.
Falling for her could mean his destruction.

A single mom trying to get by
Krista was ready to leave hooking behind when her ex cleaned out her bank account. Stuck working to provide for her daughter, she protects herself with one rule: never get involved with someone at the club.
Not that she wants to. Sex has become a job, a means to an end.

One night together as an escape
Krista's body wakes at Colt's touch, allowing her to imagine a life after the MC. A future. A happily-ever-after, if only briefly. Krista brings out feelings in Colt he forgot could exist. But just as he begins to trust again, Krista's truth is revealed - testing the very boundaries of Colt's jealousy and faith.

“I’ve been looking forward to Enforcer’s Price since the moment I learned the premise, and I’m happy to say that this debut novel by Sarah Hawthorne doesn’t disappoint. Edgy and real, Enforcer’s Price grabs at your heart and doesn’t let go!” -- J. Kenner/Julie Kenner, New York Times & #1 International bestselling author

“I loved Enforcer’s Price. It’s a wild ride showing the gritty side of love in an MC.” -- Jade Chandler, author of the Jericho Brotherhood series

“Enforcer's Pride is a wild ride. It gets you in the feels and keeps going. It's a dark and gritty MC romance, and I can't wait for more.” -- Jade Chandler, author of the Jericho Brotherhood series

“Enforcer’s Price is a sexy romance with spicy, cagey, and memorable characters who need to make the right choices this time around or forfeit everything. The plot is believable and has intense moments that leave the reader breathless. Hawthorne writes with passion and honesty.” -- Romantic Times 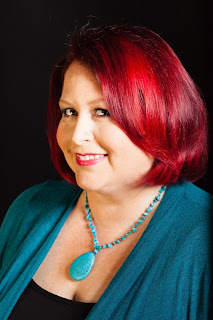 Sarah Hawthorne lives in the Pacific Northwest and drinks coffee in the winter and champagne in the summer. She enjoys writing, gardening and planning vacations. Please visit Sarah at www.sarahhawthorne.com.