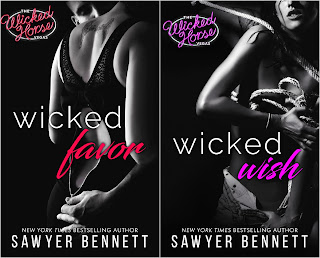 Sad to have seen The Wicked Horse come to an end? Well, a new one’s been opened in Vegas and it’s hotter than ever! Wicked Favor & Wicked Wish are the first two books in the new series from New York Times Bestselling Author Sawyer Bennett.

As the owner of The Wicked Horse, an elite sex club located along the Vegas Strip, Jerico Jameson never spends the night alone. Gorgeous, ripped, and totally alpha, Jerico doesn’t grant favors and will rarely give you the time of day—unless he wants you in his bed. So when the sister of his sworn enemy shows up asking for help, saying no should be easy. But when Jerico takes one look at her and sees an opportunity to help this beautiful woman while exacting revenge on her brother, he’s not about to pass that up.
Beaten and bruised, Trista Barnes is running out of options, and Jerico is her last chance to get out of the mess she’s in. She doesn’t know why Jerico despises her brother so much, but as long as he can help her, she doesn’t care. Jerico offers her safety while opening her up to a sinful world she never knew existed.
As she succumbs to Jerico’s erotic charm, Trista lets herself fall into the wicked world of guilt free pleasure with no regrets. Under his strong alpha hand, she blooms, and so does Jerico’s possessiveness. But what happens when Trista finds out she was a pawn in Jerico’s game all along, and that the price for his favor was steeper than she ever imagined – her heart.

New York Times bestselling author Sawyer Bennett heats up Sin City when the Wicked Horse comes to Las Vegas. Stop by and visit the Wicked Horse Vegas to fulfill your Wicked Wish and to make your darkest desires reality.

Never in your wildest dreams could you begin to imagine all the filthy and depraved things that go on inside The Wicked Horse. Step inside to make every one of your dirty fantasies come true.

Since the release of her debut contemporary romance novel, Off Sides, in January 2013, Sawyer Bennett has released more than 30 books and has been featured on both the USA Today and New York Times bestseller lists on multiple occasions.

Sawyer likes her Bloody Marys strong, her martinis dirty, and her heroes a combination of the two. When not bringing fictional romance to life, Sawyer is a chauffeur, stylist, chef, maid, and personal assistant to a very active toddler, as well as full-time servant to two adorably naughty dogs. She believes in the good of others, and that a bad day can be cured with a great work-out, cake, or a combination of the two.