“You don’t ever have to keep anything you feel locked up, Clay. I’m your Dom, and whatever you need from me, I’ll gladly give to you.”

Police Officer Clay Foster is finally at peace and happy with his life. He enjoys his career as a member of Houston’s SWAT team, and he loves submitting to his Dom in the bedroom. His life is perfect, until one cruel act destroys Clay’s bubble of happiness. Shattered trust forces Clay to reevaluate his career, his relationship, and himself.

Sergeant Logan Pierce is the leader of Houston’s elite SWAT team. On the force, he’s the best at what he does. In private, the most important thing in his life is taking care of his submissive, Clay. Clay is his whole world, and Logan will do whatever is necessary to keep him safe. Even if that means going up against Clay’s stubbornness in order to help him heal.

Can Logan and Clay work together to rebuild their happiness? Can they find their way back to the shared passion of Dominance and submission? Or will their love and relationship end before it’s truly begun? 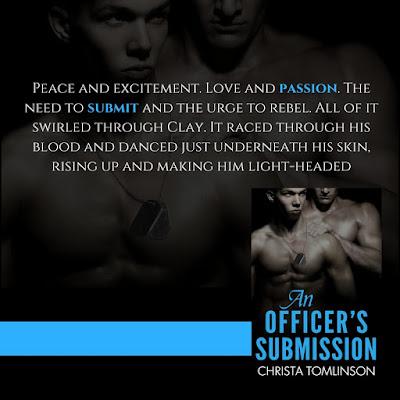 Clay lay on the couch, his feet in Logan’s lap. It was a comfortable night. They’d just returned from dinner out with their co-worker, Q, and his wife, Cassie. Q had been a little quiet, but it had been nice to have dinner with the couple. Now they were relaxing before bed. The TV was on, but Clay wasn’t paying any attention to it. Instead, he focused on Logan, who absently rubbed Clay’s foot while they watched the ten o’clock news. He looked good as always, dressed in a lightweight, chocolate-brown sweater that complemented his dark blond hair and hazel eyes. His face was clean-shaven, his jawline hard. Logan looked exactly like what he was—a regimented and in control SWAT team sergeant for the Houston Police Department. When a commercial came on, Clay spoke up. “It’s good to be back home.”

Logan looked down at him with an eyebrow raised. “Home?”

Clay snorted a laugh. As usual, they were at Logan’s house. When he thought about it, he realized he hadn’t been back to his apartment in weeks. In fact, his bags from their recent trip to Colorado were here at Logan’s. He hadn’t bothered to take them back to his place after their return.

“If I’m in your space too much, I can throw all my stuff in the car and head back to my apartment,” he said as he pretended to pull away.

Logan tightened his grip on his foot. “You’re not going anywhere.”

Clay bit his lip to hold back a grin. “I didn’t think you wanted me to. But what I meant is, I feel good about life. That trip was awesome. I got to play in the snow, just like I wanted.”

“And I got to warm you up when you were done.”

“You did a very good job. You might have gotten me a little overheated a few times,” he teased. He wiggled his toes as Logan squeezed his foot again. “You and I are in a great place. And I think things are going to be better at work now too. We redid Hayden’s ridiculous course and passed with flying colors this time.”

“And you didn’t have any fights with Ryan afterward,” Logan said with a smile.

Clay rolled his eyes. “Ryan is cool people now. He wasn’t cool then.”

Logan gave him an admonishing look. “Still, you shouldn’t have started that fight. You knew better.”

“I know. But he pissed me off. And maybe it was good that we had that fight to get all of the animosity out of our systems.”

“Anyway. I’m hoping the fact that we passed the redo means Hayden will get off our backs and quit fucking with our schedule.”

This time it was Logan who snorted a laugh, but he didn’t otherwise answer. Clay didn’t really expect him to. He was vocal in his dislike of their captain, but Logan wasn’t one to show disrespect for a superior. Hayden had been doing everything he could to piss them off the past couple of months. He hadn’t come out and said it, but Clay figured it was because he and Logan were out and a couple. The captain hadn’t had such a hard-on for making things difficult for their team before their announcement.

“So, you’re good with Ryan. The team is gelling again. And we’re hoping Hayden will finally move on and give up on his pet project of tormenting our team. Anything else?”

Clay shifted, looking at the TV instead of Logan. “What else is there?”

“Are you still blaming yourself for that idiot making those fake calls to our team?”

Clay pulled his feet off Logan’s lap for real this time and got up from the couch. “Why wouldn’t I blame myself? It was my fault.”

“It wasn’t your fault. And I don’t like hearing you say that it was.”

“C’mon, Sarge. You know that was on me.” Clay roughly ran a hand through his hair, turning his back on his lover. “If I hadn’t gone to that convention and went on camera bragging about how badass our team was, that whacko would have never taken it as a challenge to try and prove he was better than us.” He turned back around as Logan grabbed his hand and pulled him to stand in between his legs.

“Maybe not. But maybe he would have taken his anger out in another way.”

“You read the report Roberts put together on the guy. He was looking for revenge because he felt he’d been slighted too many times. What if he’d decided to go on a shooting rampage at IR Media Gaming’s headquarters? What if he’d physically attacked the people he wanted revenge against? That teacher, the store manager, or your friend Ian? Someone or several someones could have been hurt. At least with the revenge tactics he chose, no one was. We managed to catch the idiot, and hopefully he’ll be granted some time to think about what he did.”

“Are you forgetting he tried to kill me?” Clay saw a muscle tic in Logan’s jaw at the question, his hazel eyes going hard before he answered.

Clay tilted his head to the side as he studied his lover. “You know, I noticed that the perp seemed a little worse for wear before you got him loaded in the patrol car.” Along with Ryan, Clay had been the last to leave the guy’s apartment. By the time he’d made it outside and down the stairs, he’d noticed Carlos, Logan’s best friend, standing at the corner of the building, looking like he was keeping watch. A few moments later, Logan had led the man from around the side of the apartment building. He hadn’t had any marks on him, but he’d been bent over, coughing as Logan walked him to the squad car. “Did you do anything to cause that?”

“I’ll never let anyone hurt you.”

Logan’s response was a non-answer, but it confirmed Clay’s suspicions. “I’m a cop. On occasion, I might get hurt. And you can’t go after people because of that.”

“And you’re mine. Did you forget that?”

“Come here.” Clay followed the gentle pull Logan gave his hand to drop down to the couch and straddle his lap.

“You’re my lover. My submissive. It’s my right and my pleasure to protect you, always.” He brought a hand up, his thumb sliding across the metal collar that circled Clay’s neck. “I won’t let anything or anyone hurt you or take you away from me.”

A thrill shot through Clay at that declaration. Logan’s unapologetic possessiveness had caused problems early on in their relationship, but they’d worked on it and come to an understanding on boundaries. Now, he was able to revel in Logan’s possessiveness and caring, because he knew it wouldn’t get out of hand. Clay pressed his forehead to Logan’s and closed his eyes. “I love when you talk to me like that.”

Logan’s hand moved to grip the back of his neck. “Do you?”

“Because it makes me feel like the most important thing in your world. I’ve never felt like that with anyone.”

“It’s true. You are the most important thing to me. Having you in my life, wearing my collar, means everything to me.”

Clay opened his eyes and looked into his lover’s gaze, seeing the sincerity there. Not that he doubted him. Logan had proven time and time again how much he loved him. “I don’t deserve you, Sir. And I don’t do enough to show you how much I love you in return.”

“You don’t have to do anything to deserve me. I’m with you because I don’t ever want to be with anyone else.”

“Well, maybe I can show you what I feel tonight. Physically.” He brought a hand up to rub the pad of muscle on Logan’s chest. “Let me serve you, Sir.”

Christa lives in Houston, Texas with her two dogs, and is a retired roller derby player. She enjoys hearing from readers, other authors and aspiring writers. For more on Christa's work, including deleted scenes, excerpts, and free reads, visit www.ChristaTomlinson.com