Recommended for mature readers due to strong language and graphic violence.

Rayne Kilpatrick has everything. A job she’s dreamed of since a little girl. The perfect house. And a man she loves and is about to marry… Until he never returns from a humanitarian mission.

When footage of his gruesome murder by a Muslim extremist group is shown across the country and around the globe, she wants the person responsible for the disappearance of the man she loves to pay. She wants him to lose the one person who means the world to him, too, and she won’t stop until he does.

Alexander Burnham has everything… Finally. A job he enjoys where he can actually make a difference in the world. The perfect woman who he’s loved his entire life. And the most beautiful daughter a father could ask for… Until he walks into her bedroom one morning to find it empty.

It’s a race against the clock for Alexander to put the pieces together and find out who has taken his daughter and what they want from him. As information comes to light, he is forced to bury the guilt he feels after losing his fellow team member and focus instead on finding and saving his daughter…

Before it’s too late.

Vanished can be read in conjunction with or separate from the Beautiful Mess series. 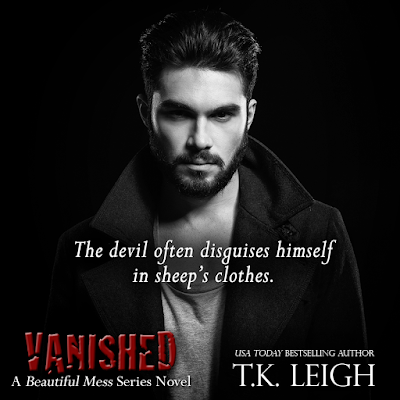 
99c for release day only 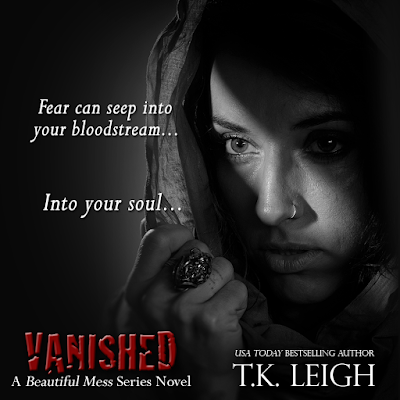 This was no longer home to a fearless girl who had more love for Olivia than she deserved. This would now become a place of nightmares for her daughter. Would she ever be able to sleep in this room again? Would she ever want to sleep alone? Would she ever feel safe?

Olivia struggled to come to terms with what Melanie’s life would be like if she survived this. She hadn’t done anything to deserve this. Alexander wasn’t without his faults, and neither was Olivia, but Melanie was so young, so pure, so innocent. Now, at far too young an age, she would be jaded by the cruelties of the world.

Would she ever see her smile again?

Would she ever hear her carefree laugh?

Would she ever feel her unconditional love as she flung her arms around her?

Bleakness invaded Olivia right down to her core as she fell onto Melanie’s unmade bed. Sheets that were once warm from her presence had grown cold, and Olivia could no longer keep it in. She wasn’t just watching a made-for-TV movie about a successful, semi-famous family losing their daughter. She was living the nightmare. wishing with everything she had that this would all be over soon, that it wasn’t real.

“Wake up!” Olivia screamed, slapping her face as relentless tears streamed down her cheeks. She curled into a ball, the torment growing inside her becoming unbearable. It felt like someone was ripping her open with sadistic apathy, the pace languid and sluggish, taking pleasure from each strained breath she struggled to capture. Her skin prickled with the heat of a thousand branding irons. No matter how loud she screamed, it wouldn’t dull the pain.

“Wake up, Olivia!” she bellowed again, louder and more desperate. Nothing worked. No matter what she did, no matter how loud her cries, nothing would wake her from this nightmare.

Sobs wracked through her body as she fought for air. She tried to gain control over her body and tears, but it was useless. She was no longer in command of her own destiny. Even the seemingly innate task of inhaling and exhaling had become arduous and complicated. Melanie was her lifeline, her reason for living. Without her, Olivia’s heart gave out, her lungs refused to work, her body shut down.

Suddenly, a pair of familiar, strong arms cradled her, lifting her off the torturous bed, cocooning her in a shelter only they could provide. They comforted her sobs, giving her exactly what she needed. She cried into her husband’s chest, a hundred tears falling for every regret. No words were spoken. Lowering himself to the floor, he simply held her in his lap, wiping her tears, providing her with warmth in this cold, hateful world.

She didn’t know how many minutes ticked by as he remained there, silently assuring her with his presence that they would get through this, that everything would work out. Still, she knew they would never be the same. This had shaken their family to its core. There was no returning to the way things were before.

Exhaustion set in as her cries subsided and she closed her eyes. The last thing she saw before drifting off was Melanie standing alone in a dark room, a blank expression on her pale face. 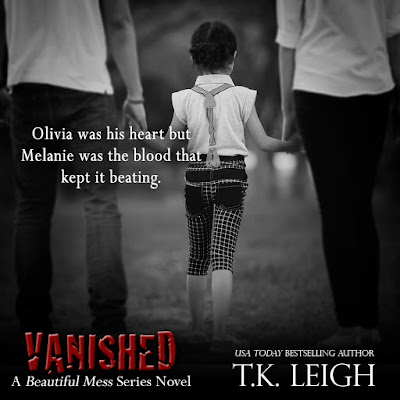 T.K. Leigh, otherwise known as Tracy Leigh Kellam, is a USA Today Bestselling author of the Beautiful Mess series, in addition to several other works. Originally from New England, she now resides in sunny Southern California with her husband, dog, and three cats, all of which she has rescued (including the husband). In late 2015, she gave birth to her first (and only) baby. When she’s not planted in front of her computer, writing away, she can be found training for her next marathon (of which she has run over fifteen fulls and far too many halfs to recall) or chasing her daughter around the house.

T.K. Leigh is represented by Jane Dystel of Dystel & Goderich Literary Management. All publishing inquiries, including audio, foreign, and film rights, should be directed to her.

a Rafflecopter giveaway
at February 07, 2017