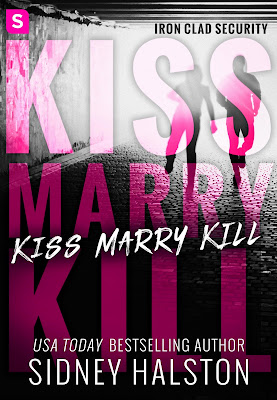 KISS MARRY KILL by Sidney Halston
Iron Clad Security series Book #1
E-Original published by Swerve
Publication Date: March 28, 2017
ISBN: 9781250132420
Price: $3.99
Description
He's been chasing a memory . . .
It was just supposed to be a regular Thursday afternoon…and then he saw her. Sitting in seat L214, one seat over from his at the baseball game, right next to her douche of a soon-to-be-ex-boyfriend. An impromptu kiss for the kiss cam, and Jax knew his life would never be the same. Five years and a tour in Afghanistan later, Jax is back stateside running his own private security firm, Iron-Clad, with his best friend. He isn't the man he used to be... but Megan isn't the sexy and sweet, though sheltered, twenty-two-year-old he left behind, either. And she's in trouble. ...but now they're on the run.
Megan Cruz has made something of herself. She’s turned her dreams of pop stardom into a reality. But when a deadly stalker breaks into her home claiming to be her number-one fan, the only person she can turn to is the boy who got away. But Jax isn’t the same carefree charmer who stole her heart, then broke it when he joined the military. This man is seductive, hard, guarded. And he'll do anything to protect what's his.

“Oh my god! Look!” She pulled on Richard’s arm and pointed up to the screen. “We’re on the jumbotron! You have to kiss me. It’s the kiss cam, Richard!”
She leaned over but he swatted her away and the crowd booed.
“Richard!” she yelled again, again pointing to the screen, hating herself for having to beg.
When he continued to ignore her, she hunched over and looked around, embarrassed. Once the camera was off them she leaned closer and asked, “Why did you bother coming if you weren’t even going to watch?” Normally, she was quiet and reserved and internalized her emotions because Cruzes didn’t show emotions. But right now she wasn’t sad. She was pissed.
“I did it for you because you kept saying you wanted to come. I hate baseball. You know that.”
“Actually I did not know that.” What else didn’t she know about him? He didn’t know she hated beer and she didn’t know he hated baseball. A day at the ballpark seemed silly now, what they needed was freakin’ counseling!
Her parents had been putting pressure on them to marry and Richard seemed completely on board with the plan, although he hadn’t proposed. These days, they barely saw each other. She was sick of it. She understood he had goals, but she wanted to be important in his life. How delusional had she been in thinking maybe they could have fun today, re-spark their relationship before their lives started to get even more hectic. But instead of connected, she felt even more distant.
How many times had she watched some boring political documentary because he wanted to watch it? She’d done it for him without a peep, and the man couldn’t be bothered to at least pretend he “wanted to be here.
She sat with her arms crossed over her chest, the game effectively ruined by his sour mood. The bobbing leg of the guy on her left was getting annoying, too. Even though he smelled wonderful—some sort of manly cologne she’d never smelled before. A scent very different from Richard’s exorbitantly priced Dior Sauvage that he liked to douse himself with whenever he left his house. Lately she had been feeling things change between them. It was an overwhelming sense of loneliness that she couldn’t shake off. She felt silly and guilty for feeling this way with a boyfriend at her side, so she’d shut the emotion off, ignoring it and trying to make the best of things. But even sitting there with him, it was as if she was alone.
When everyone began to cheer, she forced herself to look up at the jumbotron again. “Richard! Look!” She pointed up, wiping the scowl off her face, suddenly desperate to prove to herself and the world that there was some spark in their relationship, some romance. “It’s the kiss cam again. Come on, please, it’ll take two seconds.”
Again he brushed her off, and she fought back tears.
What an asshole!
People were whispering and pointing all around the stadium. She groaned to herself, Oh, God, my humiliation is being televised for the entire nation to witness.
She slid lower in her chair and tilted the bill of her cap down. It was a harsh reality to face in front of thousands of people, but one that struck her hard and fast like a bucket of cold water.
This was the end.
Richard was not only a selfish bastard, he was a selfish bastard who didn’t want her. But the real sobering surprise was that she didn’t even care because she didn’t want him either.
For the second time, the asshole rejected her.
Again they were on display and again her obtuse guy refused to kiss her. She’d elbowed him, but he was too busy typing into his phone to pay her any mind. She looked downright crestfallen and embarrassed in front of a maxed-out stadium, slouched down hiding her eyes with her baseball cap.
Jax didn’t know what came over him in the moment but something definitely did. It was probably his fly-by-the-seat-of-his-pants character or maybe the fact that she didn’t deserve to be humiliated. No girl did. Especially not this girl.
He tapped her on the shoulder.
She turned, her eyes full of unshed tears.
From his peripheral vision he could see she was still spotlighted on the jumbotron.
He was moments away from doing something bold and inappropriate. And those big sad brown eyes, glossy downturned lips, and pink cheeks fueled him.
Without hesitation he cupped her face and moved in for a kiss. 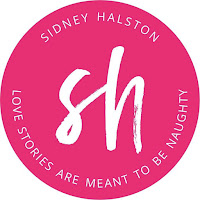 Author Bio
USA Today bestselling author Sidney Halston lives her life by one simple rule: "Just Do It" - Nike. And that's exactly what she did. After working hard as an attorney, Sidney picked up a pen for the first time at thirty years old to begin her dream of writing. Having never written anything other than very exciting legal briefs, she found an outlet for her imaginative, romantic side and wrote Seeing Red.

That first pen stroke sealed the deal, and she fell in love with writing. Sidney lives in South Florida with her husband and children. She loves her family above all else, and reading follows a close second. When she's not writing, you can find her reading and reading and reading. She's a reader first and a writer second. When she's not writing or reading, her life is complete and utter chaos, trying to balance family life with work and writing (and reading). But she wouldn't have it any other way.