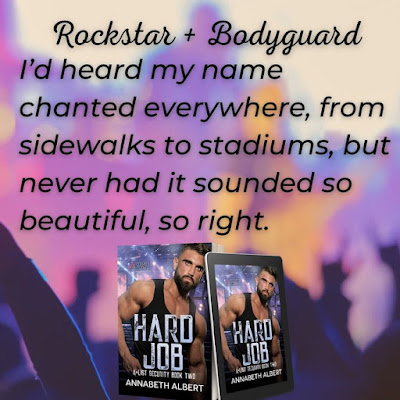 How hard can it be to guard the country’s biggest rockstar? 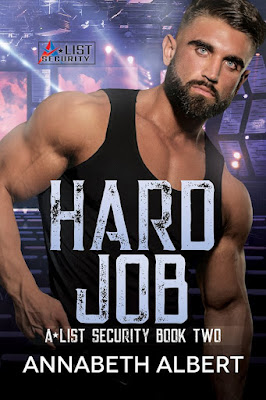 As a SEAL officer, I’m no stranger to danger, but running my own security firm is a new challenge. Finding the right bodyguard for each client isn’t easy. Our next gig? My little brother’s best friend, rock god Ezra Moon, has a security crisis. Ezra is convinced I’m the right man for the job, but I’m not so sure.

From crowd surfing to infamous pictures, Ezra is known for taking risks. It’s no wonder his record label thinks he needs a keeper on tour.

But there’s not a tour bus big enough to contain our incendiary attraction. Ezra and his antics push every last one of my buttons, but the real problem is how much I want to kiss some sense into him. He’s a client, and angry make-out sessions aren’t the answer. Yet we keep finding ourselves alone and burning up the sheets until our secret fling threatens to scorch both of us.

I’ve spent my whole life running from the spotlight, trying to distance myself from my notorious father. Ezra wants to live his best life on the biggest stage. A future seems impossible, but our feelings are undeniable. Can I admit how hard I’ve fallen for Ezra without losing everything?

HARD JOB is book two in a brand-new SEAL bodyguard series. It features a reluctant SEAL bodyguard, a mouthy rock star with a heart of gold, molten chemistry, and pie. Lots of pie. Also, all the high heat, big emotions, and found family feels readers expect from this fan-favorite military romance author. Join A-List security for this new series featuring former SEALs and the celebrity clients who win their hearts. Happy endings and no cliffhangers guaranteed! 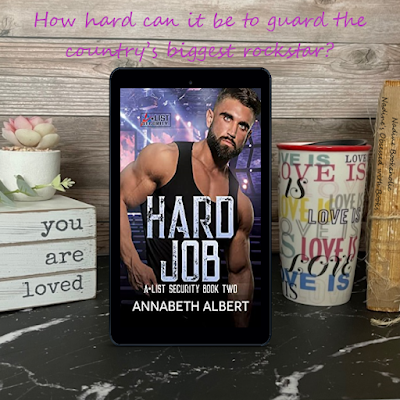 I have been a fan of Annabeth Albert's for a while now I especially love her Military Romances so when I heard she was writing this series of Former Military men turned Security I couldn't wait for it, and this book is like getting two great Romances in one because not only do we have a retired Navy SEAL but we also have a ROCKSTAR! Heck yeah you read that right, we get both and I for one loved it.
Former Navy SEAL Duncan Lubov runs A-List Security and his brother Danny, who was in the first book of the series, is requesting his help to keep his best friend Ezra Moon safe while he is on tour with his band. What Danny didn't think of when making this request is that Ezra has been mooning over Duncan since he was a fifteen year old teenager and Duncan was in the Military....I wonder if he knew that if he would have made the same request?
I really connected with Duncan in this story and I totally understood his reasoning on certain things...no one wants to be the punchline. If you want to know what I mean you'll have to read the book 😉 Ezra was great for him though and the only thing better than their mutual love of pies was their chemistry.
I wouldn't consider this a forced proximity romance even though they did travel on a tour bus because they had separate hotel rooms when they were at their destinations. I would highly recommend this book to those that enjoy Siblings Best Friend or the Age Gap tropes in their MM Romances.
Happy Reading!!!

Annabeth Albert grew up sneaking romance novels under the bed covers. Now, she devours all subgenres of romance out in the open—no flashlights required! When she’s not adding to her keeper shelf, she’s a multi-published Pacific Northwest romance writer. The #OutOfUniform series joins her critically acclaimed and fan-favorite LGBTQ romance #Gaymers, #PortlandHeat and #PerfectHarmony series. To find out what she’s working on next and other fun extras, check out her website: www.annabethalbert.com or connect with Annabeth on Twitter, Facebook, Instagram, and Spotify!
Also, be sure to sign up for her newsletter for free ficlets, bonus reads, and contests. The fan group, Annabeth’s Angels, on Facebook is also a great place for bonus content and exclusive contests. Emotionally complex, sexy, and funny stories are her favorites both to read and to write. Annabeth loves finding happy endings for a variety of pairings and is a passionate gay rights supporter. In between searching out dark heroes to redeem, she works a rewarding day job and wrangles two active children.