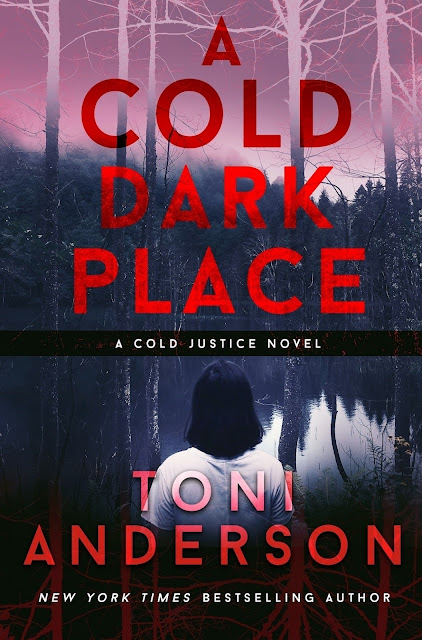 But his secret will destroy them both.

FBI agent Mallory Rooney spent the last eighteen years searching for her identical twin sister’s abductor. With a serial killer carving her sister’s initials into the bodies of his victims, Mallory thinks she may finally have found him.

Former soldier Alex Parker is a highly decorated but damaged war hero with a secret—he’s a covert government assassin who hunts predators. Now he’s looking into the murders too.

When danger starts to circle Mallory, Alex is forced out of the shadows to protect her and they must race against the clock to find the killer. But the lies and betrayals that define Alex’s life threaten to destroy them both—especially when the man who stole her sister all those years ago, makes Mallory his next target.
ADD TO GOODREADS 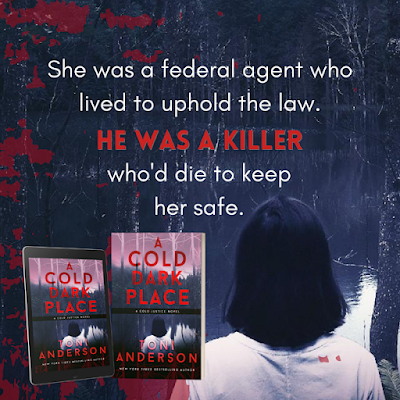 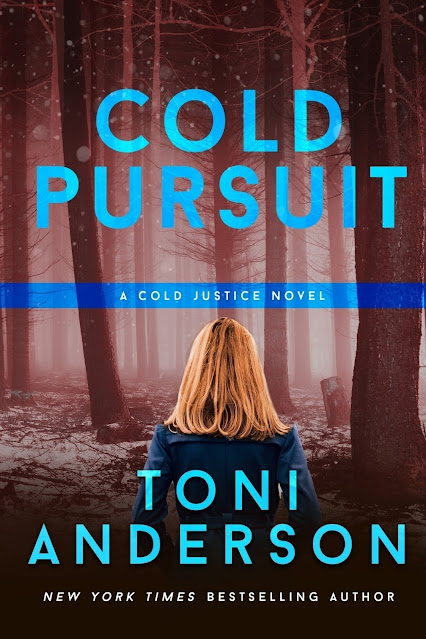 COLD PURSUIT
A desperate single-mother protecting her child. A dedicated FBI agent chasing a lead. Ruthless terrorists who want them both dead.

Single mom Vivi Vincent is thrust into her worst nightmare when she and her eight-year-old son are trapped inside a mall during a terror attack. Jed Brennan, a dedicated FBI agent on enforced leave, helps Vivi and her son survive the assault. But the danger is just beginning...

Vivi’s son may have witnessed critical details of the terrorists’ future plans and is targeted for death, but he’s mute, and he’s traumatized. When someone launches a strike against the FBI’s safe house, Jed fears the bad guys have an inside man. Not knowing who to trust, he hides mother and son in a log cabin deep in the heart of the Wisconsin Northwoods. There Jed and Vivi try to figure out how to unlock the information inside her son’s head.

What they don't bargain for is the red-hot attraction that flares between them or the extent of the sinister plot that threatens to rip apart any chance of happiness they might have together.
ADD TO GOODREADS 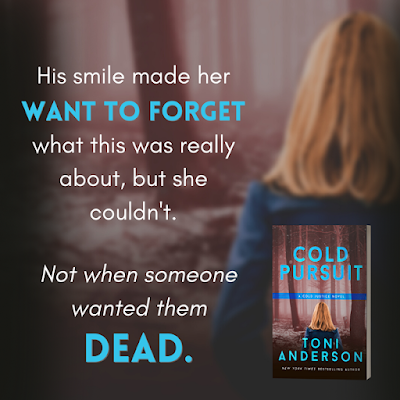 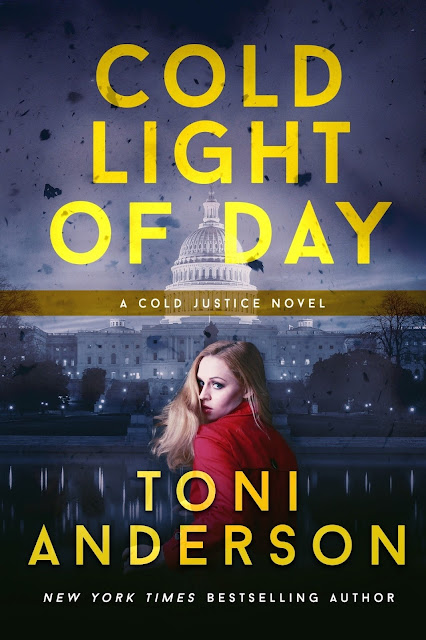 COLD LIGHT OF DAY
What happens when an FBI agent falls for the daughter of the most notorious spy in US history? Discover the explosive chemistry in this non-stop action Romantic Suspense!
Physicist Scarlett Stone is the daughter of the most reviled spy in FBI history. With her father dying in prison, time is running out. Using a false identity, she gains access to the Russian ambassador's Christmas party, and searches for evidence to prove her father's innocence.
Former Navy SEAL, now FBI Supervisory Special Agent, Matt Lazlo, is instantly attracted to Scarlett when they are first introduced. But when he discovers she lied to him about her identity, he hunts her down with the ruthless efficiency he usually reserves for serial killers.
Not only does Scarlett's scheme fail, it puts her in the sights of people who reward unwanted curiosity with callous brutality. The FBI—and Matt—aren't thrilled with her, either. As agents involved in her father's criminal investigation begin to die in mysterious circumstances, and the attempts to silence Scarlett intensify, Matt and his colleagues begin to wonder—is Scarlett telling the truth? Is there a traitor in their midst?
ADD TO GOODREADS 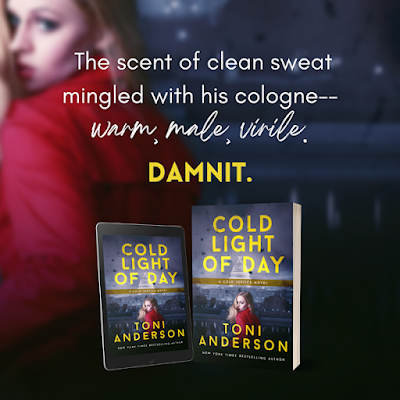 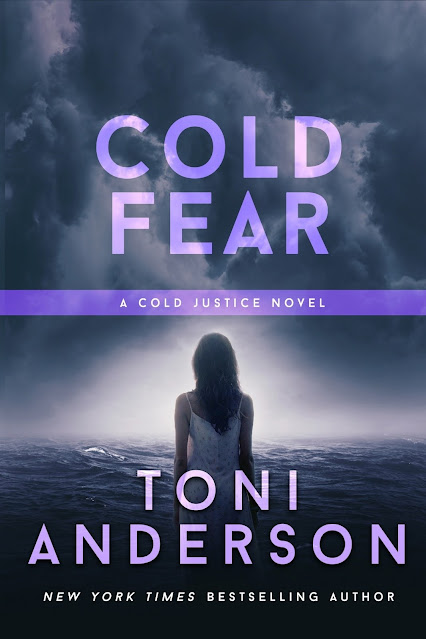 COLD FEAR
Enigmatic and aloof FBI profiler Lincoln Frazer falls for a woman hiding dark secrets...
When old evidence turns up on a fresh corpse, ASAC Lincoln Frazer is determined it won't delay the execution of a convicted serial killer. But when more young women are brutally slain, it becomes clear—this new killer is intimately familiar with the old murders.
After her mother's death, Army Captain Dr. Isadora Campbell resigned her commission in order to return to the Outer Banks to raise her rebellious teenage sister. But Izzy hides a terrible secret, and it doesn't take long to realize someone knows exactly what she did, all those years ago.
Thrust together during the investigation, Frazer and Izzy find themselves reluctantly drawn to one another. When the truth about Izzy's past emerges, Frazer struggles with her deception. And when the killer strikes again, the race is on to save Izzy from the same terrible fate as all the other dead girls.
ADD TO GOODREADS 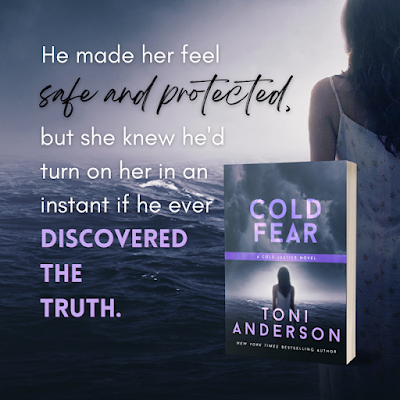 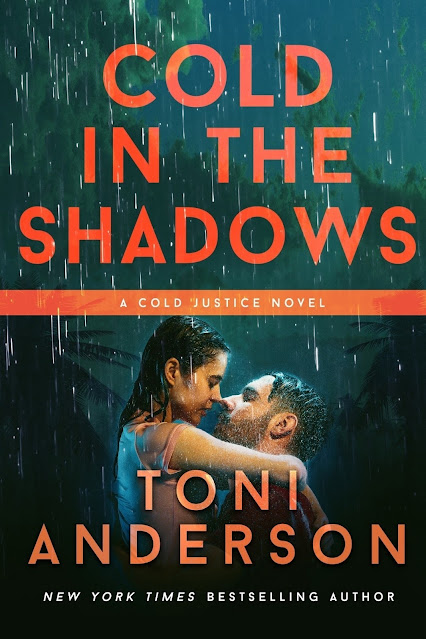 COLD IN THE SHADOWS
CIA Officer Patrick Killion needs to figure out if feisty frog biologist, Audrey Lockhart, is a deadly assassin or an innocent scapegoat. And the only way to do that is to gain her trust, and then betray it.
Attacked and left for dead, Audrey is forced to put her trust in an enigmatic stranger who saves her from certain death. Then Audrey discovers her rescue was actually an abduction, and the man she thought was her savior is her captor.
Killion is falling hard and fast for his target and suddenly he has his hands full, dealing with a smart, beautiful woman who is furious at his deception. Betrayal is everywhere and Killion doesn't know who to trust. The organization he works for? Or the woman he's falling in love with?
ADD TO GOODREADS 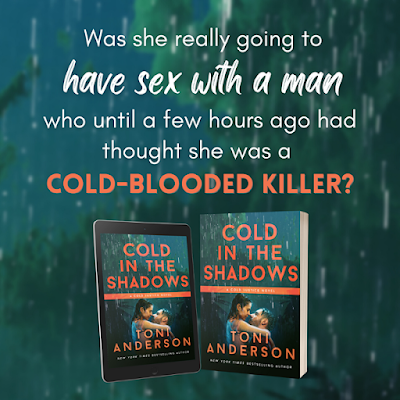 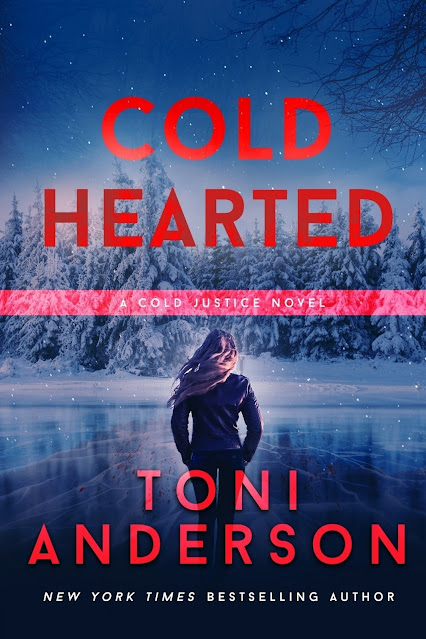 COLD HEARTED
Hunting for a killer who doesn't play by the rules.
Detective Erin Donovan expects life to settle down after the arrest and conviction of a serial rapist who terrorized her college town last summer. Then two young women are brutally slain and the murders bear all the hallmarks of the campus rapist. Did Erin arrest the wrong man?
Her job is at stake and tensions are high. Just when it looks like things can't get worse, the FBI’s Behavioral Analysis Unit sends a profiler to assist the investigation—in the form of a man Erin has never been able to forget.
Three years ago, former Marine scout sniper Darsh Singh’s feelings for Erin had him breaking all his own rules. Now his only interest in the former NYPD detective is figuring out if she messed up an investigation and helped send an innocent man to prison.
Being forced to work together rekindles their attraction, and as Darsh and Erin begin to fall for one another, the serial predator fixates on the female detective hunting him. Can they identify the killer before he makes Erin his final victim?
ADD TO GOODREADS 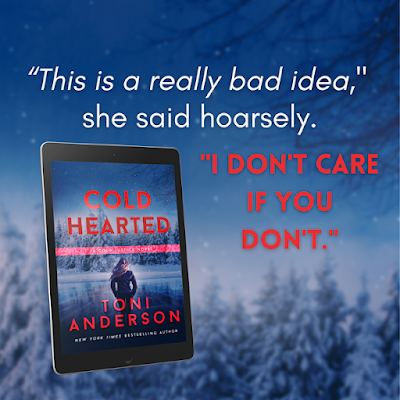 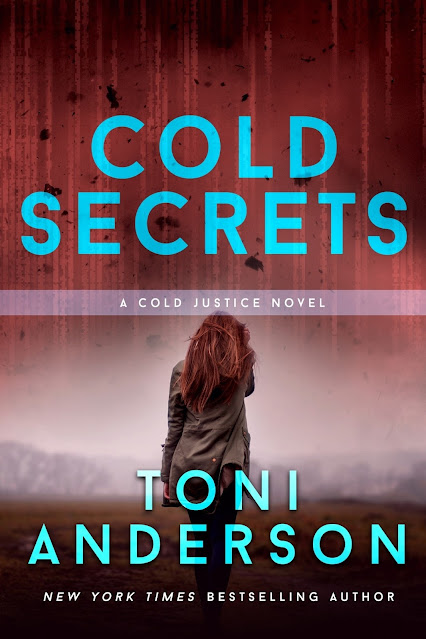 COLD SECRETS
An FBI agent risks her heart and closely guarded secrets in this pulse-pounding Romantic Thriller.
When an international ring of traffickers kidnaps an eight-year-old girl in Boston, FBI Supervisory Special Agent Lucas Randall heads undercover. But his rescue mission goes disastrously wrong and Lucas barely escapes with his life. Now the ruthless crime gang is trying to hunt him down, along with everyone else who threatens their operation.
Computer expert Ashley Chen joined the FBI to fight against evil in the world—evil she experienced firsthand. She has mad skills and deadly secrets, and once she starts working with straight-shooting Lucas Randall, she also has big trouble. After years of pushing people away, she's finally falling for someone. The feeling is entirely mutual, but as Ashley intensifies her online pursuit of an international trafficking ring, her traumatic past collides with her present.
Suddenly, Lucas doesn't know which side Ashley is on. As the case escalates into a high-stakes game of cat and mouse, it turns out Ashley isn't the only one with something to hide. But if neither can trust the other with their secrets, how can they trust each other with their hearts?
ADD TO GOODREADS 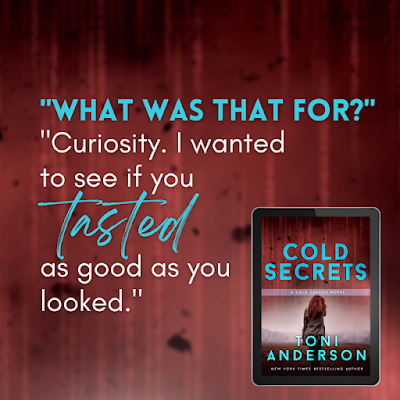 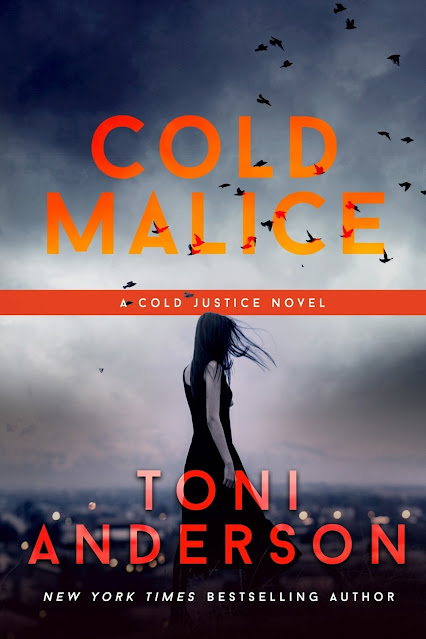 COLD MALICE
Twenty years ago, she was a cult leader's innocent daughter and he was an undercover agent who broke her heart and destroyed her life. Now he's back...
Assistant Special Agent in Charge Steve (Mac) McKenzie is leading a task force investigating a series of malicious crimes in the heart of Washington, DC. His undercover work in an antigovernment compound twenty years earlier is related—as is the sweet, innocent girl he befriended back then. Now that girl is a beautiful woman, and she has something to hide.
Tess Fallon spent a lifetime trying to outrun her family's bigotry, but someone is using the anniversary of her father's death to carry out evil crimes and she's terrified her younger brother is involved. She sets out to uncover the truth and comes face-to-face with a man she once idolized, a man she thought long dead. As the crimes escalate, it becomes obvious the killer has an agenda, and Tess and Mac are running out of time to stop him.
Will the perpetrator use a decades-old dream of revolution to attack the federal government? And will the fact that Tess and Mac have fallen hard for one another give a stone-cold killer the power to destroy them?
ADD TO GOODREADS 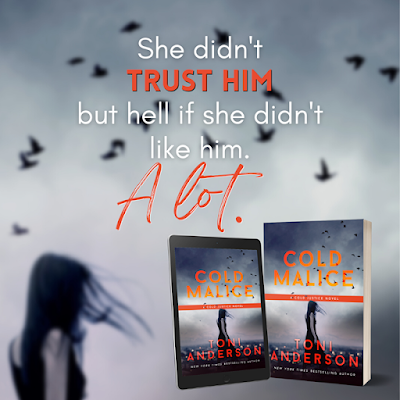 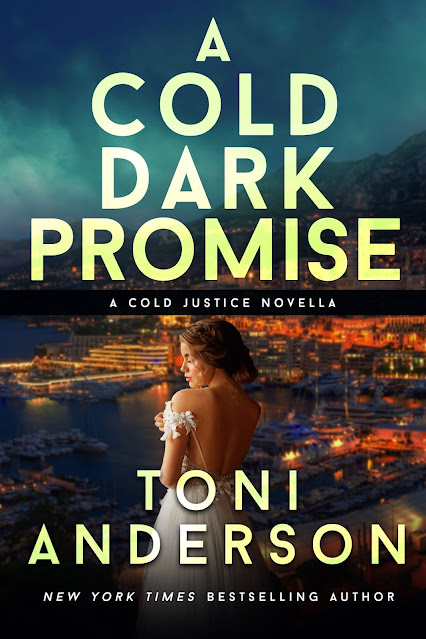 A COLD DARK PROMISE
A heart-wrenching, emotional story about love, bioweapons, and the importance of keeping promises.

In the midst of wedding preparations, a shadowy figure from Alex Parker's past reappears and threatens the joy he's found with Mallory Rooney.

Four years ago, Jane Sanders’s powerful ex-husband kidnapped their young daughter and Jane hasn't seen her since. Now, she finally has a lead and she knows just the man to help get her daughter back. Trouble is, he's an assassin. And he terrifies her.

Despite his upcoming nuptials, Alex agrees to help, but it doesn't take long for the routine operation to turn complicated—and deadly on a global scale.

Can the former assassin make it home in time to marry the woman he loves, or will his dark past destroy all hope for their future?
ADD TO GOODREADS 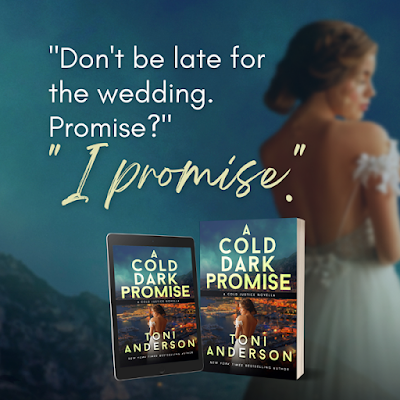 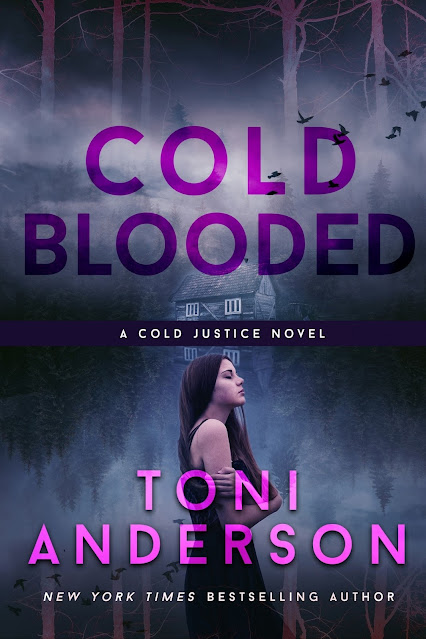 COLD BLOODED
A journalist searching for the truth about her best friend’s death—and the FBI agent who needs her to stop.

Disgraced investigative journalist Pip West is devastated when she discovers her best friend’s body face-down in a tranquil lake. When cops and federal agents determine that her friend overdosed then drowned, Pip knows they’re mistaken and intends to prove it.

Special Agent Hunt Kincaid doesn’t trust journalists and has no patience for Pip’s delusions, especially since her actions could expose why the FBI is so interested in her friend’s final days. The dead scientist worked at the cutting edge of vaccine research and may have a connection to a new, weaponized, vaccine-resistant anthrax strain that just hit the blackmarket.

The more Pip digs, the closer she gets to both the intriguing FBI agent, and to a bioweapons terrorist who’s more than willing to cold-bloodedly sacrifice anyone who gets in his way.
ADD TO GOODREADS 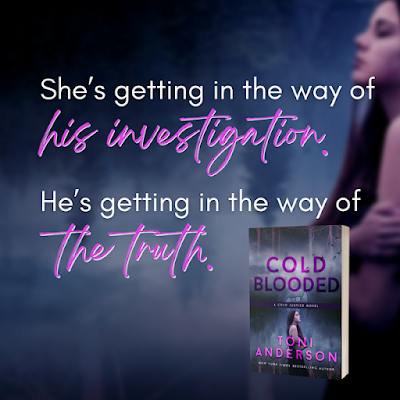 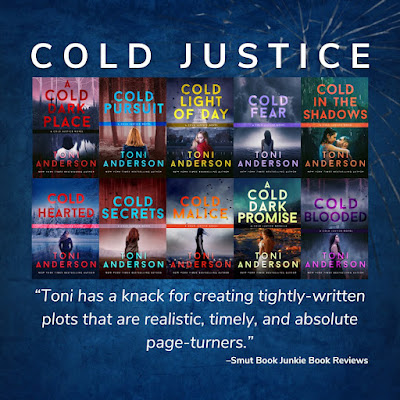 Toni Anderson writes gritty, sexy, FBI Romantic Thrillers, and is a New York Times and a USA Today bestselling author. Her books have won the Daphne du Maurier Award for Excellence in Mystery and Suspense, Readers’ Choice, Aspen Gold, Book Buyers’ Best, Golden Quill, National Excellence in Story Telling (NEST) Contest, and National Excellence in Romance Fiction awards. She's been a finalist in both the VIVIAN and the RITA. Nearly three million copies of her books have been downloaded.

Best known for her "COLD JUSTICE" books perhaps it's not surprising to discover Toni lives in one of the most extreme climates on earth—Manitoba, Canada. Formerly a Marine Biologist, she still misses the ocean, but is lucky enough to travel for research purposes. In January 2016, she visited FBI Headquarters in Washington DC, including a tour of the Strategic Information and Operations Center. She hopes not to get arrested for her Google searches.