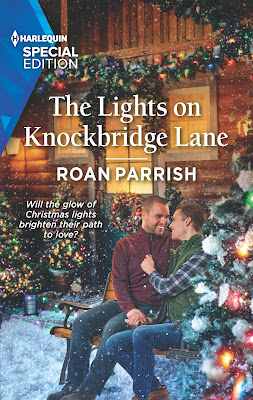 Raising a family was always Adam Mills’ dream, although solo parenting and moving back to tiny Garnet Run certainly were not. After a messy breakup, Adam is doing his best to give his young daughter the life she deserves—including accepting help from their new, reclusive neighbor to fulfill her Christmas wish.

Though the little house may not have “the most lights ever,” the Mills home begins to brighten as handsome Wes Mobray spends more time there and slowly sheds his protective layers. But when the eye-catching house ends up in the news, Wes has to make a choice: hide from the darkness of his unusual past or embrace the light of a future—and a family—with Adam.

Add The Lights on Knockbridge Lane to your Goodreads!

Buy The Lights on Knockbridge Lane by Roan Parrish

Add The Lights on Knockbridge Lane to your Goodreads!

Everyone on Knockbridge Lane had a different theory about Westley Mobray. It was the first thing Adam Mills heard about as he introduced himself around last week, when he and August moved in.

The eight-year-old McKinnon twins next door said he was a vampire. Their parents, Darren and Rose McKinnon, scoffed at that, but said he could be a witch. Marisol Gutierrez three doors down insisted she’d seen him skulking around the neighborhood at night, hunting for animals to sacrifice to the devil. A teenager at the end of the street reported that anyone who looked him in the eyes would be hypnotized, and anyone who touched him would turn to stone. Mr. Montgomery on the corner just said freak.

Westley Mobray was never seen before sunset, though mysterious packages arrived on his doorstep often. He never spoke to anyone and never waved hello. And late at night, the windows of his run-down house glowed an eerie green.

At least, that’s what they told Adam.

So when he saw the man in question through the twilit haze of his own front window—with his daughter in tow—he was understandably startled. Especially since he’d thought she was playing quietly in her room.

He’d slammed two coffees to prevent it, but he’d been asleep. The kind of light, unsatisfying sleep he often fell into when he had a moment of quiet. Which was something that didn’t happen that often as the newly single parent of an eight-year-old.

His insomnia had been pretty bad since the divorce, and worse since they moved back to Garnet Run, where he was the only one responsible for Gus.

The knock at the door jerked him out of that strange sleep, and he scrambled for the door, stubbing his toe in the process, so that when he yanked it open he was biting back the kind of words that he tried with varying degrees of success not to say in front of Gus.

He focused on Gus first. She was all in one piece and was even smiling. It was her I did something bad and delightful smile, but a smile was good—at least when on a child who seemed to have been forcibly dragged home by an irate stranger.

“Where is your coat?” is what came out of Adam’s mouth.

Sometimes he tried to remember what it was like when he talked about things like the composition of his next shot, which restaurant’s tiramisu he preferred, or the latest cozy mystery he was reading.

Now he said things like “Where is your coat” and “Don’t take that apart” and “If you don’t stop making that sound I might have to throttle you.” Okay, he didn’t say the last one so much as think it. Often.

“It’s not that cold,” his wonderful, brilliant daughter said, her lips only vaguely blue.

Adam counseled himself to breathe.

Once he’d determined that Gus was all in one piece and frostbite wasn’t imminent, he turned his attention to the man who’d brought her home.

Westley Mobray was tall and severe, with shaved dark hair and strong dark eyebrows over piercing blue eyes. Those eyes were narrowed slightly, either in anger or—if the neighborhood rumors were to be believed—because he never went outside when there was the slightest bit of light still in the sky, as it would, of course, burn him to ash.

“She broke into my house,” he said. His voice was low and rough with disuse. 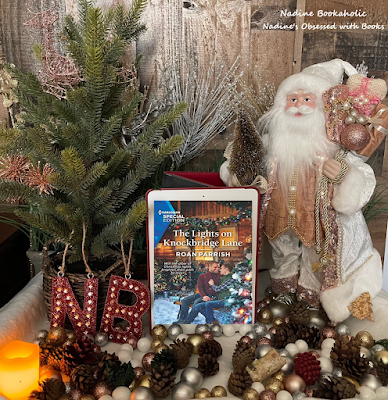 My first dip into the world of Roan Parrish and this was the perfect book for it. Steamy, Sweet, and an all around Feel Good Read that is sure to get everyone into the holiday spirit.
Gus stole the show every time she was on the page, this adorable eight year old will have you laughing out loud more than you would believe. The frank way she speaks was just perfect. Adam has been raising Gus since she was an infant and he definitely more of a dad than an Uncle to her, their bond was so strong it was touching. Adam would do anything his little girl wants and if she want the most lights ever on their house for Christmas, well that's what she'll have.
Wes is a recluse, he doesn't go outside much at all he prefers to stay indoors and work on his project which could change things radically for those in under funded areas. He enjoys the company of his pets and that's about it, until Adam and Gus move in next door.
I really enjoyed the way things played out with Adam and Wes, and the relationship between Wes and Gus was great! She had him wrapped around her little finger in no time at all.
If you are looking for an MM Romance that will get you into the holiday spirit I highly recommend this book to you. And if you enjoy Audiobooks, Michael Dean did a great job with the narration and really brought this story to life.
Happy Reading!!!

Roan Parrish lives in Philadelphia, where she’s gradually attempting to write love stories in every genre. When not writing, she can be found cutting her friends’ hair, meandering through the city while listening to torch songs and melodic death metal, or cooking overly elaborate meals. She loves bonfires, winter beaches, minor chord harmonies, and self-tattooing. One time she may or may not have baked a six-layer chocolate cake and then thrown it out the window in a fit of pique.

Connect with the Author