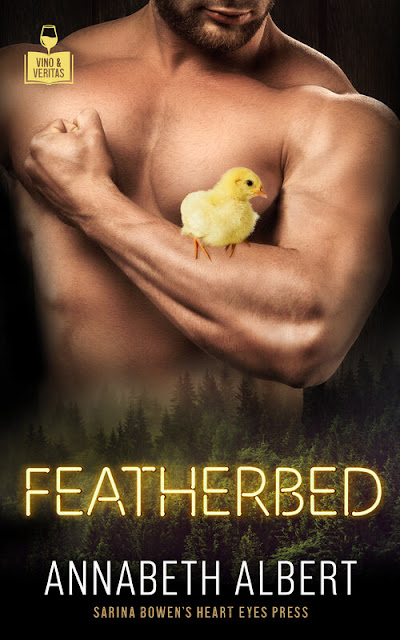 When a bookworm on borrowed time meets a younger, free-spirited chicken farmer, sparks and feathers fly…

Harrison Phillip Fletcher III isn’t supposed to be here. Not in Burlington, Vermont, not running Vino & Veritas, a quaint inclusive bookstore and wine bar, and definitely not still alive at forty-two. Also not supposed to be here? An unexpected delivery of chickens.

Finn Barnes knows chickens. The burly organic farmer knows all about rare breed poultry, but dealing with a hot, older bookseller is an entirely different matter. City slicker types like Harrison never end up staying in Vermont for the long-term.

They should steer clear of each other. But the flare of attraction is mutual. And somehow, amid book discussions and farm tours, they discover plenty in common. Now they’re stealing kisses in Finn’s barn, sneaking out like teens, and burning up the sheets.

What starts as a fling brings very real feelings for two lonely souls, but a future together seems as unlikely as chickens in a bookstore. Feathers may be flying, but learning to trust takes time neither may have. Can they take a leap of faith together before it’s too late?

Featherbed is a stand-alone novel in Sarina Bowen’s True North world. This opposites attract, age gap romance features a low-angst, fluffy—and feathery—romp as a fish out of water discovers the home he never thought he’d find. 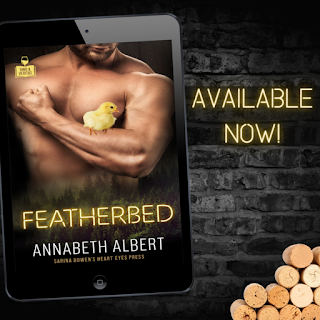 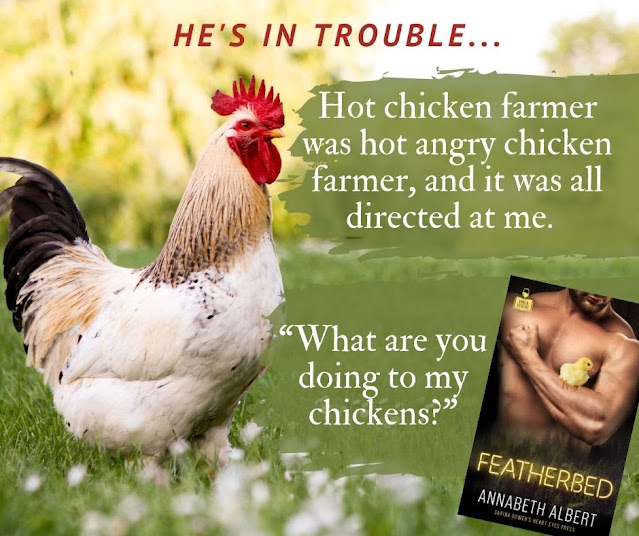 “What’s next?” Harrison was so serious that I wasn’t sure whether he meant us or the shelf project, but I couldn’t resist messing with him a little.

“No one calls me Harry.” His mouth pursed. I wanted to kiss it. Perversely, the more uptight he got, the more I wanted to unravel him.

“Not even your mom?” I found the correct drill bit for the project and slotted it in.

“Ha.” Harrison had locked his gaze on my hands in a way that made me both self-conscious and more than a little turned-on. “I call her Mom only because she dislikes the formality of Mother.”

“Whereas you love the formality. I get it. Harry.” I put deliberate emphasis on the nickname, so that I could categorize all the different shades of pink and purple he was turning. Besides, it was a good distraction from how his shrewd eyes made me feel.

“You’re fun to harass.” I grinned at him, which earned me an eye roll in return.

“I try. Now give me something to do.”

“Okay, okay. Back to work. You can help by measuring to mark each of the screw holes.”

“Because you have a dirty mind, Harry.” I gave him an exaggerated leer.

“You better stop that.” He didn’t sound particularly convincing.

“Stop teasing or stop looking at you?” Laughing, I waggled the drill in his direction. “I’ll remind you that I’m the one holding power tools.”

“So you are.” Harrison kept holding my gaze, eyes soft and expectant behind his glasses, tongue darting out to lick at his lips. In that moment, he was infinitely appealing and nothing at all like Astin.

Maybe I’d been mistaken in thinking he was a branch of the same tree of rich dudes who had no issues taking what they wanted. Like him, Astin had favored designer clothing, pricey-looking watches, and the same luxury brand car, and had also dropped clues about inheritances. But unlike Astin, there was a certain humility to Harrison, and he didn’t try to tell me how to do my job.

Oh, Harrison was still a city slicker, and probably not sticking around, but he wasn’t an entitled asshole either. He wanted to kiss me. That want was all over his face, but so was his restraint. As with the woodworking, he’d let me lead. He’d wait for me to make my move and didn’t have a ready arsenal of slick lines. His uncertainty was perhaps the most charming thing about him.

And so, still meeting his eyes, I set the drill back down on the workbench. “No power tools now. You still want to shut me up?”

I stepped closer, in case he had any doubt as to my intent. He smelled good. Expensive, like someone had married delicate herbs and leather scents in an aftershave that probably cost more than a year’s supply of my soap.

“Yeah. I think I do.” His cultured voice had gone husky, but still contained that vulnerability I found so damn intoxicating.

“Show me.” Touching the sleeve of his waffle-knit sweater, I turned him toward me. There. I’d made my move. The next was his. 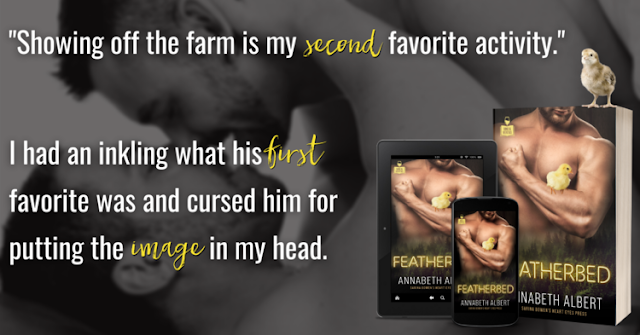 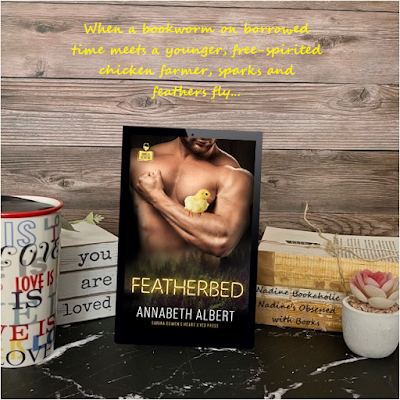 What a great way to start the Vino & Veritas series in the TRUE NORTH WORLD, Featherbed by Annabeth Albert takes us on a sweet & steamy journey as Harrison Phillip Fletcher, III does everything he can to help his moms dream become a reality before his fate claims him.
Leaving New York City behind and moving to Vermont was a huge change for Harrison but when he finds a delivery of chickens instead of books arrived at his bookstore he knows things are not going to be anything like he expected.
Finn Barnes is expecting a delivery of some rare chickens, Ayam Cemani, which he plans on breeding for their unique coloring. What he didn't expect is to have to pick them up in town at a bookstore/wine bar that is getting ready for it's grand opening.
The first meeting between Harrison and Finn was hysterical, actually there were quite a few times I found myself laughing out loud. I also found myself needing a few tissues as well as a few glasses of ice cold water because when these two finally got together they were hot! The chemistry was there right from the beginning but things progressed slowly between them so no insta-love here it was a natural progression which I enjoyed watching evolve. I especially enjoy when opposites find that they fit quite nicely together.
This book can be read as a standalone, you do not have to have read Sarina Bowen’s World of True North to enjoy this. I would recommend this book to anyone that enjoys MM romance, Age-Gap Romance, Small Town Romances or Opposites Attract Romances.
Happy Reading!!! 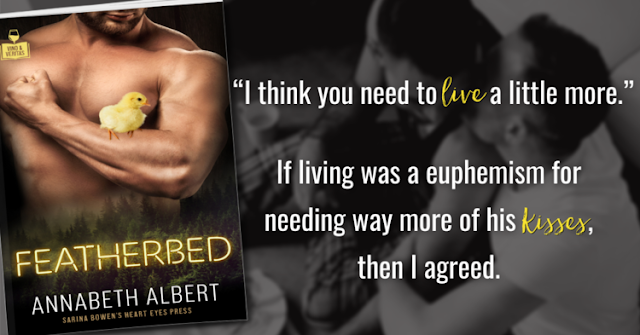