Today we have the blog tour for WOLF RANCH: FERAL by Renee Rose & Vanessa Vale! Check it out and be sure to grab your copy today! 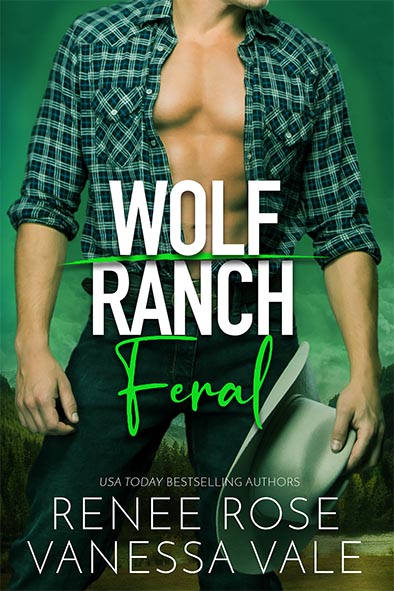 Pack Rule #3: The alpha must mate.

The stronger the alpha, the greater the danger.

Moon madness could claim me any time now.

I’ve looked all over the continent, gone to mating games, but I still haven’t found the she-wolf meant to be mine. I’ve already become too feral in bed.

I’m not safe—not for random females. Especially not the human variety.

One just moved into the ranch next door. She’s way too tempting. And I’m way too dangerous.

I have to stay away. I don’t dare get near her.

Because I would die before I ever let anything harm the little human.

Catch Up on the Series:

“What are you doing up here?” She knelt by a decent sized hole in the shingles. It hadn’t been ripped off from the rain the night before, but maybe from the storms a few weeks ago, when one of our trees fell through the barn during Boyd’s and Audrey’s wedding reception.

“What the fuck are you doing up here?”

She waved the hammer she held in her left hand. “Fixing a leak.”

“Not happening.” She was squatting down, and she shifted slightly to face me. At least she had on jeans and sturdy leather boots. I wouldn’t have to punish her for wearing something stupid like flip flops. “I found a few shingles in the old barn. I’m giving it a patch for now.”

“I’m not arguing with you about what you’re doing, I’m arguing at the fact that you are doing it. It’s dangerous as fuck up here. You could have slipped off, and no one would have known.”

Her back stiffened, and her eyes narrowed. Her breathing picked up, and I couldn’t miss the way her breasts rose and fell beneath her white tank top. Or the fact that her skin had a sheen of perspiration or that I could scent that tang of sweat along with her sweet essence. She had on more clothes than I’d ever seen her in, but she was still stunning. And now she was as pissed as me. It was obvious she didn’t like to be told what to do. In a situation like this, thirty feet up? Too fucking bad.

“You’re not my keeper,” she practically growled, which made my wolf want to growl right back.

“It sure as fuck isn’t Markle,” I countered.

Her eyes narrowed, and her cheeks flushed. “It isn’t you.”

“It sure is, angel. Give me that hammer, and we’ll get this patched. Then you’re getting your hot little ass off this roof.”

“I can patch it just fine, thank you.” Her sass was supposed to piss me off. It only made me hard. Made me ache to sink balls deep inside her. But not up here on a fucking roof.

“You have two minutes to finish.” I didn’t move, just glared. Waited. My issue wasn’t with her ability to fix the roof—she could do the job. Once she was down though, I was going to destroy that ladder so she couldn’t get up here again.

She huffed, then slid one of the rectangular roofing sheets into place, hammered it along the top side. She did two more, covering the damaged area.

I held out my hand for the hammer. With a frown, she handed it to me.

“I’ll go down first. You follow. Then we’ll discuss your punishment.”

Her mouth fell open, and one brow lifted, but I stood and went to the ladder. She hadn’t moved.

I tipped my chin. “Bad girls get punished.”

If there was a button on Natalie labeled Fucking Pissed, I just pushed it. Except her nipples popped through her tank top, telling me how much she loved the idea.

“Did you seriously get on the roof alone?” I countered. “One of the ranch hands does something like this, he’d be shoveling manure for a month. You’ll only get your ass spanked.”

She was still squatting down on the roof, but I couldn’t miss the way she squirmed. “And you think you’re the guy to do it?”

I tilted my head to the side, drinking in the sight of her. Feisty. Aroused. Pretending to be invincible. “Course, it’s not punishment if you like it. We’ll go with Plan B.”

Her lips stretched into a grin. “Catch me if you can.”

Vanessa Vale is the USA Today bestselling author of sexy romance novels, including her popular Bridgewater historical romance series and hot contemporary romances. With over one million books sold, Vanessa writes about unapologetic bad boys who don’t just fall in love, they fall hard. Her books are available worldwide in multiple languages in e-book, print, audio and even as an online game. When she’s not writing, Vanessa savors the insanity of raising two boys and figuring out how many meals she can make with a pressure cooker. While she’s not as skilled at social media as her kids, she loves to interact with readers.