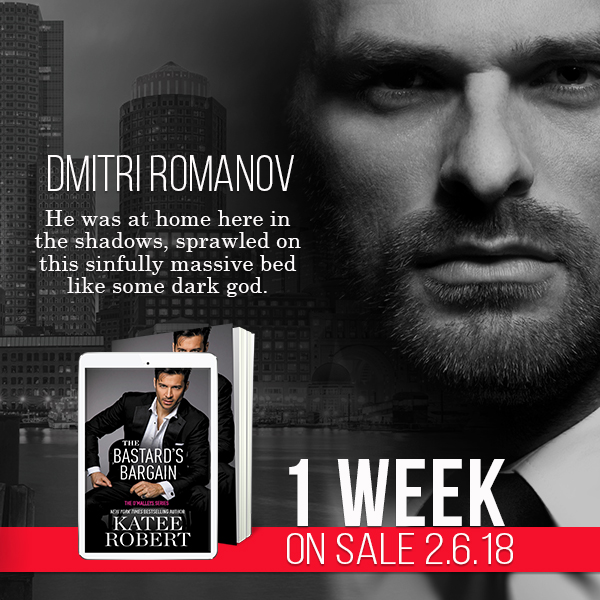 Have you Pre-ordered THE BASTARD’S BARGAIN YET?

Do it. Dmitri will be yours forever.

New York Times and USA Today bestselling author Katee Robert delivers the final installment in her sizzling O'Malleys family series, hailed as "The Godfather meets Romeo & Juliet." In THE BASTARD’S BARGAIN Dmitri Romanov must use his legendary focus and control to stay one step ahead of everyone else in the ever-shifting power plays of New York City. 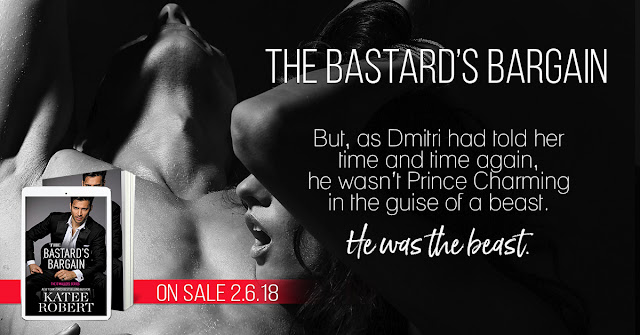 What readers are saying:

“The Bastard's Bargain presents a seductive escape and a fulfilling fantasy for that bad boy craving a girl can never outgrow.”—Isha at Book Likes


Pre-order THE BASTARD’S BARGAIN and add it to your TBR pile on Goodreads! Then keep reading to get a sneak peek excerpt and to enter the giveaway for a $50 Amazon gift card and Dmitri Romanov scented candle! 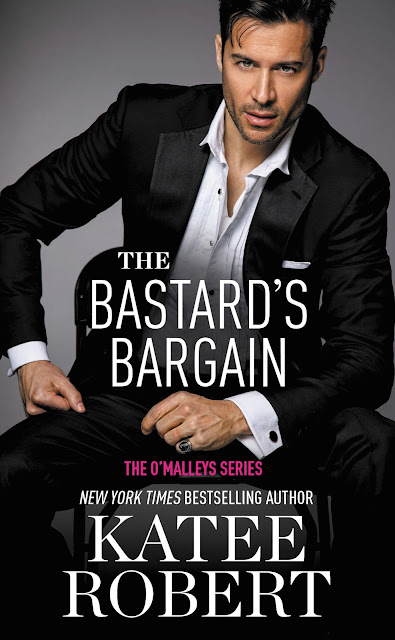 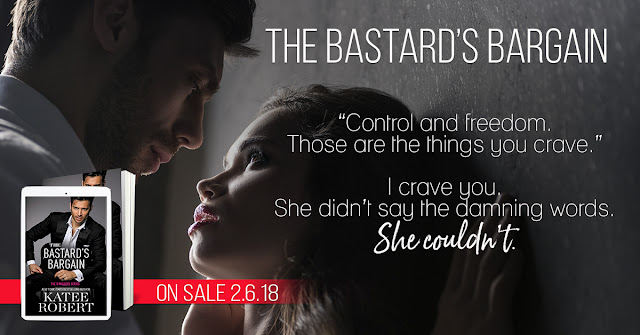 
Enter to win a grand prize of a $50 Amazon gift card and Dmitri Romanov scented candle! 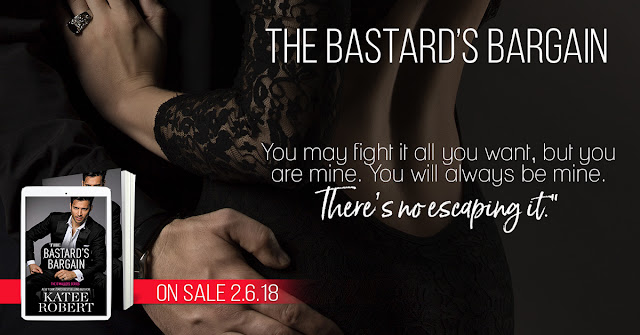 It wasn’t until the front door closed behind Ivan that the reality of her situation sank in. Dmitri was furious. He might have faked it for his friend, but he stood next to her, a pillar of stone with anger coming off him in waves. His grip on her elbow didn’t hurt, but if she’d tried to leave, he would have restrained her.
She should be afraid. She should be terrified.
Keira’s heartbeat picked up, adrenaline kicking in. She swung to face him with a fierce smile on her face. “You didn’t compliment me on my dress.” It was a work of fucking art. She smoothed her free hand over her hip and up her side. “Actually, you called me a high-class sex worker. Is that any way to speak to your beloved wife?”
His gray eyes followed the movement, a muscle ticking in his jaw when she cupped her breast. “I meant it when I said you’re playing with fire.”
That wasn’t just anger on his face now. No, it was rapidly being overtaken by sheer lust. An answering feeling sent a bolt straight to her core. She stepped back, and he released her instantly. A strange feeling coursed through her, straightening her spine and making her want to laugh out loud. Power. This is what power feels like.
He wanted her. He wanted her so badly, he had his hands clenched at his sides to keep from touching her again. But he wouldn’t until she gave the green light. Keira took another step back. “I have a hypothetical question.”
“Ask.” His voice was rough. The way he watched her made her feel like prey, and she liked it far more than she should—because she wasn’t prey. Keira had her own teeth and claws, and Dmitri would learn that as time went on.
“Hypothetical, if I said yes tonight…how do you imagine that would go?”
He stared at her a long moment. “Nyet. I’m not playing this game with you.” She blinked and he was on her, one hand snaking around to press against the exposed small of her back, the other tangling in her hair. “We are not children, moya koroleva. These games don’t become us.”
He kissed her. There was no cautious exploration or easing into it. Dmitri kissed her like a conquering warlord who was sure of his welcome because he owned everything in the room—including her. There was no fighting this. She didn’t even want to try. Keira slid her arms around his neck and pressed herself more firmly against him. His cock was a hard length with too many layers between them.
She rolled her hips, an invitation she wasn’t sure she was ready to follow through on.
Dmitri slid his hand down to cup her ass, guiding her movements. Long slides up the length of his cock and back down again. The stupid goddamn dress kept her from spreading her legs wider, from getting him exactly where she needed him. Her nipples rubbed against his shirt, the silk incredibly decadent across her sensitized skin.
“Keira. Moya koroleva.” He kissed down her jawline, tilting her head back until she had to arch her spine to accommodate the position. “Did you enjoy their eyes on you? Ivan’s. The men who owe allegiance to me. Anyone who cared to look.”
It took her desire-drugged brain a beat to catch up, but by then he was already growling out more words against her skin. “Did it make you feel powerful to know they were imagining stroking the nipples you flash with such impunity?” He moved his hand from her ass to do exactly that, dragging a finger over her puckered nipple. “They wanted the body you so proudly put on display.” His voice roughened. “They wanted what’s mine.”
Say something. If you don’t say something right now, you’re going to give in tonight and then it will all be over.
He moved his hand to her back and bent her until she relied solely on his strength to keep her off the ground. And then Dmitri’s wicked, wicked mouth closed around her nipple. The weight of the beaded design seemed heavier with his tongue flicking the engorged bud, making his touch that much hotter. She couldn’t hold back a moan as he moved to her other breast.
Dmitri dragged his mouth up the center of her chest, the only part of her not caged in the dress, stopping at the thick collar. He flicked the hollow of her throat with his tongue. “This is my favorite part of the dress.” He ran his thumb over it. “This, more than anything else, marks you as mine.”
A collar for a kept pet.
It was as if he’d doused her in icy water. Keira went rigid and shoved Dmitri away. She almost fell when he released her, but she regained her balance at the last second. They stood mere feet apart, breathing hard and staring at each other. I am no one’s pet. She slashed her hand through the air. “I might be your wife, Russian, but I’m not yours. I’ll never be yours.” 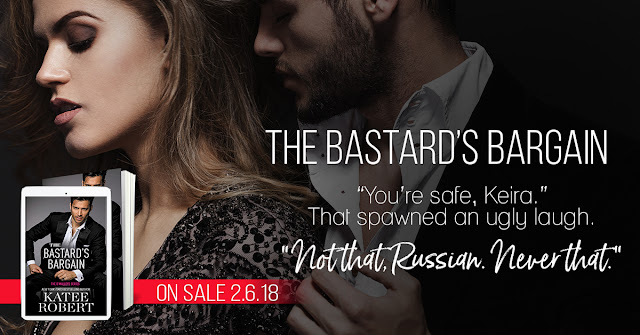