Today we have the release blitz for ROCK KING by Tara Leigh! I’m so excited to share this with you—be sure to grab your copy today! 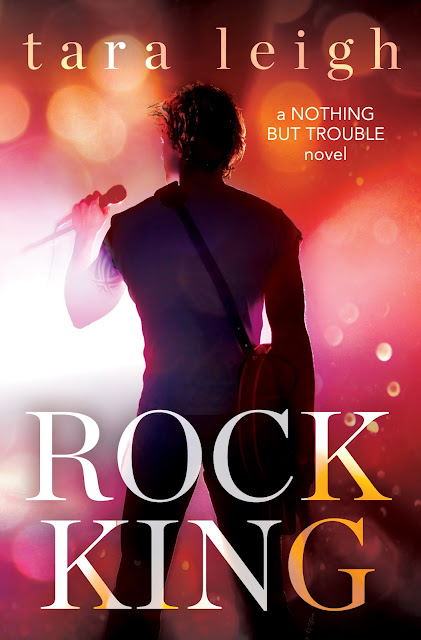 “Delaney.” I groaned her name. Running my nose along the elegant sweep of her cheekbone, I breathed in the desire rising from her skin like fog off the morning tide. My palms skimmed over her rib cage, fingers dipping beneath the waistband of her pants. Finding a satiny sliver of skin. And a set of keys.

Leaning back, I dangled them between us. “Let’s go upstairs.”

Eyes that had been as soft and smooth as sea glass blinked into focus, narrowing at their corners. “You really have a one-track mind.” Disappointment trekked across her features.

I slapped away the impulse to explain why—that if I didn’t stay focused on the easy, the attainable, I’d be dragged down by my inner demons so fast, running away would be like trying to sprint in quicksand, each panicked step making me sink deeper. “Doesn’t have to be a bad thing.”

“Maybe not for you.” Delaney reclaimed her keys, ducking away from me. Grabbing for the door handle, she gave it a firm twist. It squeaked open, sounding mournful and sad. Sounding like an ending. “But the track I’m on doesn’t leave room for middle-of-the-night booty calls with a guy who can’t even be bothered to tell me what he thought of the three minutes I spent onstage—for him. Good night, Shane. Save your voice for someone still willing to listen.”

And then she was gone. Leaving me with only the memory of her bewitching smile and pure voice. And a knot of remorse sitting heavily in my chest, leaching toxins into my bloodstream with each dull, disappointed thud of my heart.

Tara Leigh attended Washington University in St. Louis and Columbia Business School in New York, and worked on Wall Street and Main Street before “retiring” to become a wife and mother. When the people in her head became just as real as the people in her life, she decided to put their stories on paper. Tara currently lives in Fairfield County, Connecticut with her husband, children and fur-baby, Pixie. She is the author of Penthouse Player and Deal Breaker.