“Another amazing series! Scarlett Cole just writes some AMAZING characters, that are raw, real but still fictional enough that they could be your next book boyfriend or real enough that it’s someone you know…I can’t wait for more of the Preload boys.” —TBR Book Blog 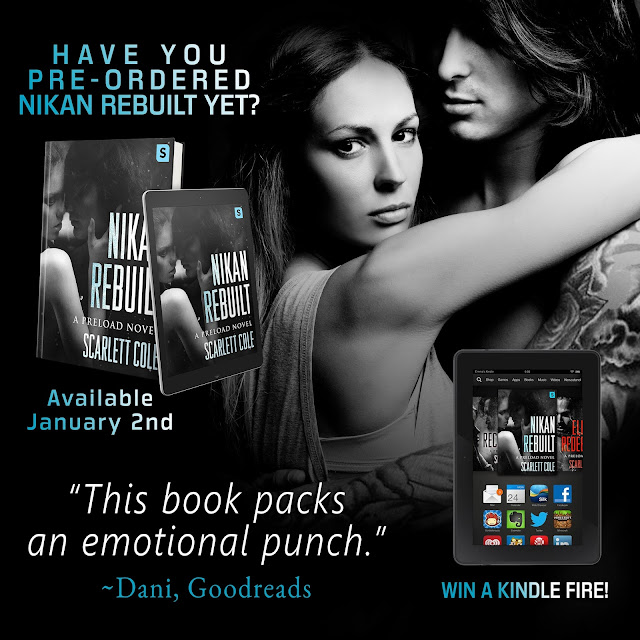 NIKAN REBUILT releases next week and I cannot wait for you to read this super-sexy rockstar romance! Pre-order today so you don’t miss this second-chance romance. Plus enter to win a Kindle Fire from Scarlett Cole!

Synopsis:
From the queen of heart-pounding, sexy, emotional romance Scarlett Cole comes Nikan Rebuilt, the next novel in the Preload series. Does the past ever really stay in the past?
Nikan can never be complete. He's got a rock group made up of the family he built for himself, more money than he knows what to do with, and a stream of groupies falling over themselves to date him. But none of them are her. The one regret that still plagues him, still taunts him with what he could have had.
Jenny is a survivor. Now running a group home after overcoming life in a cult lead by her manipulative father and watching her mother drink the poison he fed his followers, she fights to keep the light in the eyes of every boy who walks through her doors. Far from simple young love, Nik taught her to trust, showed her how good life could be. Before he formed the band. Before he became a famous rockstar. Before he destroyed it all.
A chance meeting after years of no contact shows the connection still blazes between them. But will they have their second chance at love? Or will the weight of their past crush their future together?

Enter to win a Kindle Fire!


“Why didn’t you tell anybody where you were?” It was the question that had always burned him. He knew that she didn’t have anybody else in the world who cared that she was okay as much as he did.

Jenny stopped suddenly and turned to face him. “Because I knew you would come and find me, and back then I knew I wasn’t strong enough to keep you away.”

Nik’s heart stopped in his throat. The pain in her voice cut him as deeply as any of his stab wounds had. Unable to help himself, he placed the palm of his hand on her cheek. Her face so looked so soft, so vulnerable and open. As much as he wanted to kiss her lips, he buried the urge. “I’m sorry, Jenny. I can repeat that a thousand ways, and I can show you a thousand times over just how sorry I am. I just . . .” Just what? Threw it all out of the window in a reckless fit of hedonism?

He shut the voice off.

This time it was even louder.

Jenny pulled away. “It’s probably best we leave all that alone. No point picking at a healed scab.”

“I don’t want to pick at a scab or have you hate me,” he said, sadly. “Or worse, I don’t want you to disappear on me again. I just want to get to know you, Jenny.”

“For what purpose, Nik?” Her eyes filled with tears, and he could feel the pain she was in. It mirrored his own. The pain that drove him to keep holding his makeshift family together so that life had some kind of meaning.

All out of words, he did the only thing he’d ever relied on for comfort. He pulled her into his arms and pressed his lips to hers, lips he’d used to watch as she sung, lips he could visualize around his cock as she’d given him her first-ever blow job, lips that he’d missed. They were soft and sweet, just like Jenny. Her fingers slid into his hair, her nails trailing along his scalp in a way that never failed to make him shiver. She remembered this. Their bodies remembered the way they were together. So did his dick, which was pressed up against her.

He knew it was over the moment her hands slid their way to his chest, and his heart broke all over again as she pushed him away.

“See, this is why I can’t be around you, Nik,” she cried. “It’s impossible to resist you. And we don’t belong together anymore.”

Nik shook his head. “Don’t do this, Jenny. We deserve a second chance to see what we’ve got. We are perfect together.”

“Were, Nik. We were perfect together. Don’t you see? It’s all past tense.” Jenny turned and hurried down the street.

The tattoo across my right hip says it all really. A Life Less Ordinary. Inked by the amazingly talented Luke Wessman at the Wooster Street Social Club (a.k.a. New York Ink). Why is it important? Well, it sums up my view on life. That we should all aspire to live a life that is less boring, less predictable. Be bold, and do something amazing. I’ve made some crazy choices. I’ve been a car maker, a consultant, and even a senior executive at a large retailer running strategy. Born in England, spent time in the U.S. and Japan, before ending up in Canada were I met my own, personal hero – all six and a half feet of him. Both of us are scorpios! Yeah, I know! Should have checked the astrological signs earlier, but somehow it works for us. We have two amazing kids, who I either could never part with or could easily be convinced to sell on e-bay.
I’ve wanted to be a writer for a really long time. Check through my office cupboards or my computer and you’ll find half written stories and character descriptions everywhere. Now I'm getting the chance to follow that dream.
Connect with Scarlett: Website | Facebook | Instagram | Twitter
at December 28, 2017